There is an object near you right now that is extremely technical. Maybe it’s in your pocket, or in a holster on your belt. Perhaps sitting on your desk, or in your purse or near android tv box. It could even be in your hand, showing you these words right now. It’s your savior, whenever you need to contact homework helpers with a “take my quiz” message or find out any necessary information on variety of topics. It’s lurking with you everywhere you go, and the invisible signals that make it work are pummeling your body from every direction millions of times per day. It is a marvel of human invention, and has used its power to change the daily lives of modern people. It is (bum bum BUM!) a cell phone.

Now that the silly dramatic intro is out of the way, let’s get down to chickens and coops. These days, just about everyone has a cell phone. Little kids, elderly folks and your average Joe Johnson all carry them for one reason or another. The convenience is undeniable, and as smart phones progress, their usefulness is extending miles beyond the simple ability to call people. The effect of phenomenon this is the prevalence of huge cell towers now found all over the worldwide landscape.

So how do cell towers really work? We talk about signal strength and connectivity, we have the phones in our hands, we see the towers everywhere, and we know that somehow the two connect and get the job done. I asked a few random people if they could tell me how cell towers work. Here were the replies:

“They beam up to space and back.”

“Cell towers throw the signals to land lines and then back.”

“With the power of the Lord.”

A couple of those answers do dabble in truth. The process of a cell phone tower transmission is an amazing feat, and most people don’t really understand what is happening when they place that call. Yes, towers and waves are involved, but that’s like saying a car runs on gas. It’s the first grade answer of how they work. Let’s try and learn a little more while keeping it as simple as possible… 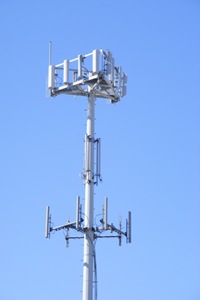 What do you think of when you see a cell tower? Probably not “Ooohh, look at how pretty that is.” Cell towers (also known as cell sites, BTS, phone masts or base stations) are huge and ugly, but we rely on them every day. Though we usually see them that way, they don’t have to be mounted on large poles or metal structures. It is not uncommon for them to be on building rooftops, water tanks or other stealth cell sites; a practice even more common in Europe. A lot are even hidden inside church steeples, palm trees or other inconspicuous objects. 150-300 feet is the average height of the placement. 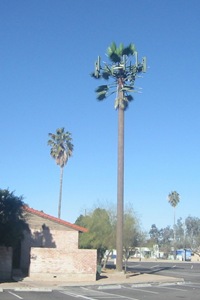 Multiple cellular providers (Verizon, AT&T, etc.) will utilize the same structures for housing their equipment. The equipment involved includes radios, antennas for receiving and transmitting RF (radio frequency) signals, computerized switching control equipment, GPS receivers, power sources and protective cover. The equipment that operators frequently need to access is kept in boxes at the tower’s base, where they run to the antennas via heavily grounded cabling. 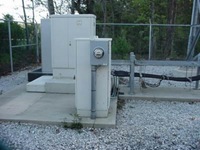 So, what happens when you pick up that phone and make a call? How does the cell tower intercept, interpret, and execute the signal?

You phone is always aware of the nearest tower. You see it in the form of signal strength. What those little bars really represent is the connectivity between you and the nearest tower that will be providing you service. When you make a call, the radio signal emitting from your phone hunts down the nearest tower and tells it you want to do something. Cell phone signals run in the radio frequency of the electromagnetic spectrum; the same area as AM and FM radio, where non-ionizing radiation is formed that is too weak to harm anything. The receiving antenna mounted on the nearest tower for your carrier picks up your radio signal, and the process of finding your caller begins.

The base station assigns your call an available frequency channel. Assigning a channel ensures other calls won’t overlap (so you won’t hear other people and they won’t hear you), and makes your call individually recognizable in the computer systems. There is a ridiculous number of frequencies available within the radio wavelength, which makes it possible for all sorts of people to talk at once using the same cell tower. (Click here to learn about radio waves – http://www.windows.ucar.edu/tour/link=/physical_science/magnetism/em_radio_waves.html) At this point, the voice data in the call is translated by the station and the signals are carried via fiberoptic line to a wireless access point connected to a switching center. The switching center operates much like an automated version of a switchboard from back in the day – there just aren’t dozens of young women on stools flicking the switches anymore.

Calls are generally routed to a land-based T3 line laid underground in order to reach their destinations, but sometimes back up to a wireless antenna signal if the ground connection is poor (or nonexistent). These wired connections are more solid and trustworthy, which is why they are the preferred method of transmission. If the call destination is a land line, it could stay in physical wires for the rest of its travel. If it is another cell phone, it will eventually have to make its way back to another tower and out through a transmitter.

When you speak with someone else or receive data, the call data reverses this whole process back to the tower you are using and sends the signal back to your phone. Even if you are on the go. If you aren’t staying still, for instance if you are talking while driving, you will eventually leave the range of your cell tower and require a new one. You’ll go outside the cell for which the original tower is responsible – which is why they are called cell phones – get it?

Fortunately for you, another cell site is able to receive a hand-off from the original tower to keep the process flowing smoothly and keep the call going. Hand-offs are possible due to most of the world’s cell towers using the same standards for communication (the GSM). Don’t forget one very important fact. All of this data travel, from the moment the radio signal leaves your phone to the moment it comes back is happening in less than a split second, thousands and thousands of times over again.

Occasionally it will fail, though, and then you have a dropped call.

When you look at a cell tower, you’ll often notice multiple triangular platforms going up the pole. Generally, these each belong to separate carriers. 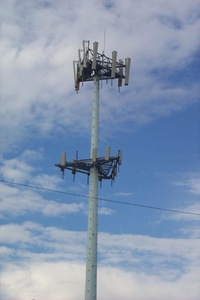 With triangular platforms, each point can cover 120 degrees, and each point can be divided to 40 degree bits. These divisions help pinpoint exact phone targets and ensure better signal strength between phone and tower. Towers with white dishes are microwave backhauls.

Cell sizes differ within GSM networks, mainly depending on where the equipment is placed and the conditions in the area. Urban areas often have cell equipment below rooftop height. Equipment at roof height, or on standard high towers, can cover more ground. Cells can be as small as single buildings, and cells called “umbrella cells” can fill in the places other cells don’t cover. 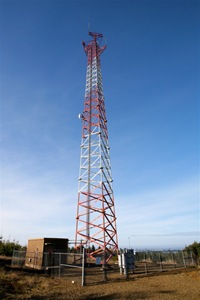 To wrap it up in a quick and easy to look at version, here’s the process:

Knowing this won’t make you the next Alexander Graham Bell, but it may give you a little more knowledge into how cell towers work than “by the power of the Lord.” Hopefully you now know a little bit about how the tower handles the call, what the parts of the tower do and why there are so many of them around.

Next time you pick up your cell and dial out, think about the huge amount of work and travel being done in the blink of an eye. It’s fantastic.

Did you know with a super fast cell phone network now you can access all your android apps remotely from anywhere on any device by loading Bluestacks onto hosted citrix xendesktop from CloudDesktopOnline with add-ons like Office 365 Enterprise E3 suite powered with 24*7 top-notch support from Apps4Rent.