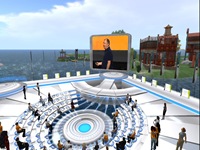 For me, and for millions of others, Second Life has always been about tapping possibility. Without the offerings of creative every day folks, the world would be entirely empty. It brings about the best in the average person that wants to see the world grow, and contribute to it in their own way. When someone who knows nothing about the virtual world asks “What is there to do?” the appropriate answer is “anything.” The fact that there is nothing in the way of limits means that people are free to do anything. 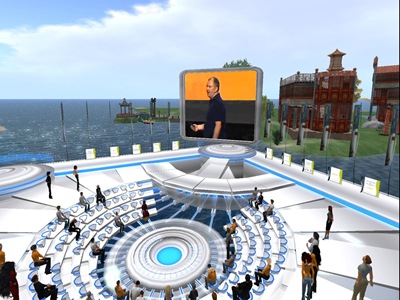 It’s undeniably true that in the 6+ years that Second Life has existed, it has never quite caught on as a mainstream tool. There have been tons of attempts, both at targeting markets and creating brilliant software tools to make the world function better for all sorts of purposes, but nothing has taken off. The world now has around 1 million frequent users, half of which are Americans and most of the other half are Europeans.

Most inhabitants of the virtual world don’t care how successful Fortune 500 companies are when they set up virtual shop. Most doesn’t care about whether or not Linden Lab is trying to rope in big businesses, cultural events or, most recently, conferences and trade shows. The vision is to bring imagination to life, and that’s what it does. Doomsday stories about the death of Second Life have been prevalent for years, yet Second Life still exists. Numbers are down and many old residents that helped assemble the underpinning of the world have left, but a new generation of users now calls the grid home. Content creation continues as always, and perhaps the new users will be the ones that manage to define what Second Life’s real-world application is really to be. 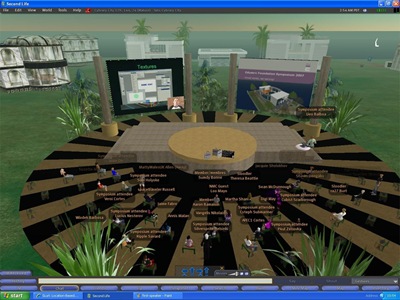 Using Second Life can be complicated, particularly if you want to be a contributor and create. While the tools are simple in design, they are challenging in implementation – requiring a combination of physical structuring, texturing and scripting to create something useful. The viewer has a massive amount of tools and options, and when something goes wrong, it often bothers everyone on the grid. But isn’t this true with every advanced technology in the beginning? A decade ago, explaining to someone what a hard drive is, or telling them to visit a website, was a complicated task. Understanding wireless internet was once a huge mystery. We get over these hurdles any rely on the brilliant engineers and developers of the world to pave our path to understanding. This is something Linden Lab excels at doing. The world is brilliantly more appealing and workable than in years past.

The practical application of Second Life in the real-world is where things get stuck. Many try it and can’t picture how working in a virtual world could lead to any beneficial end result. It’s not software for the narrow-minded. I could shop for a product, examine its 3D representation, watch a video of it in use, speak with a salesperson, buy it with Linden currency, and have it shipped to my door in the real world. That’s like shopping on Amazon, but better. Yet, it’s not something that happens every day because it’s still “weird” to the general person. The entire being of Second Life still remains somewhat an idea ahead of its time for a mass audience. That’s why it needs to hang in there. Like any technology, like any social networking or group communication, things make more sense each year.

As for Linden Lab’s attempt to capture the conference and trade show niche, who’s to say they’re wrong? If Second Life truly came before it was needed and put the cart before the horse, who’s to say this isn’t the area they were meant to be targeting? They can’t figure out what it’s best real-world function is if they don’t test all possible areas. I used to work for a small internet startup company that sought to create social networking platforms for academic conference-goers. It was designed to be a forum for conference planners to associate with attendees before, during and after the conference. It even had an interest matching system so that attendees could find other like-minded attendees to collaborate with while there. We had a few conferences locked in, but most people were unable to understand how that would help them. I attempted to get one of my good friend’s companies on board, but they just weren’t buying it. Fast forward two years, as social media has exploded beyond belief and people are seeking every possible path to communicate with others all the time, and that same company just decided to use a corporate social networking tool for their upcoming conference.

How does that relate? Second Life would have been an even better structure for these people. I worked for this company during the heat of success with my Second Life businesses, and had always dreamed of combining our web-based software with the virtual world and bringing these people from all areas of academia into a digital gathering. Apparently it was before its time two years ago, but now a shift is happening. Having a conference that lasts two days is great, but having one that lasts as long as you want it to, to which people don’t have to physically travel to and spend lots of money, where you can showcase materials with great multimedia flexibility would be even better. It’s time to test the efficacy of the idea again, this time with Linden’s support. 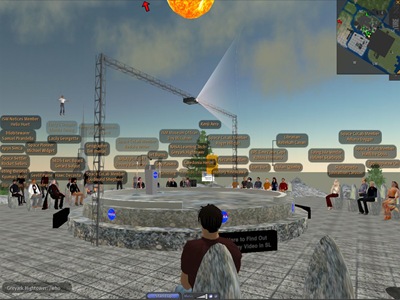 Realistically (if you can bend your mind to consider virtual possibilities realistic), Second Life is an awesome platform for conferences. It’s serviceable. You can build any type of venue with relative ease and great speed. It’s easy to give materials to people all at once. You can give people breaks where they can do really crazy, physically impossible stuff as entertainment between sessions. And even if you go all-out, hiring skilled builders and scripters, the cost will be less than in the real world. Second Life is about more than facilitating chatter, it’s about allowing you to construct something beyond any other social media system. Even if you don’t turn a profit with your SL existence, its uniqueness can serve as a value-add for a bigger real life thing.

There is hope that the stability issues within the system can be fixed over the next few years as development grows with Linden’s private, corporate-use areas, as well as with the OpenSim project. OpenSim is the open source clone that allows people to run and administrate their own sims separate to the main Linden grid. Having clandestine, personal servers, regardless of how they are allied to the main grid, is reason for great hope. Tons of powerful possibilities could come from that sort of sovereign stability that would help solve some of the platform’s innate issues. Projects like these are one of the strongest hopes for Second Life to continue and experience continual growth.

The other hope is customer service. Ask different people, and you’ll get different interpretations of how well Linden Lab handles listening to its users. Arguing whether or not they pay attention to the demands of residents is a moot point, but the fact is they need to if they want to keep up morale. Those who are faithful to the system need to remain that way and need to keep developing. If they do, Second Life is still alive, and good things can come. If they don’t, then we best keep hoping the plethora of user to user help content that has been created over the years keeps happening and keeps working.

Never forget – Second Life is nothing without its users. It would be a wasteland of open grass with no use to anyone. Everything that it is is a result of people constantly wanting to create. Facebook grew much faster. Twitter grew much, much faster. But they were designed with pinpoint concepts. Second Life started from scratch.

What SL requires if it wants to succeed in these areas is the ability for an average person to enter the software and understand it. That, and figuring out a way to ensure the system’s most common bugs, things that have never gone away over six years of development, become minimal at best. In no way does it need to label itself as something, or present itself to the public as a tool for an exclusive use. It does not need to become an ending point for a particular need; it will always have sustainability by its unique ability to let people do whatever they want with it. There are mad amounts of value to that, more than some folks like to credit.

3 comments for “Second Life is Alive”