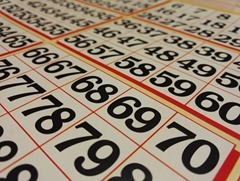 While many featured that online bingo will never become a viable substitute for conventional bingo, as they were worried that the social aspect of the game can’t be captured online. Online bingo sites managed not only to popularize online bingo and get a lot of the players that used to play at land-based bingo halls to switch online, but the rise of online bingo also enabled the popularization of multiple bingo variants that didn’t exist before.

Still, the two most popular bingo variants that can be played online are the two that have been popular even before the age of the internet – 90-ball bingo and 75-ball bingo.

90-ball bingo is also known as British bingo, as this version has been popular in the UK for quite a while, especially after WWII. In fact, the number of bingo halls in the country has been growing continuously up until 2005, which interestingly converges with the period when online bingo started gaining popularity.

Most bingo halls in the UK offer exclusively, or almost exclusively 90-ball bingo, but if you’re playing online, you’ll get a chance to choose from a wide range of other games as well. However, 90-ball bingo remains one of the most popular options for UK bingo fans.

As it’s evident from the game title, there are 90-balls, and one ticket features a total of 15 numbers. There are only three possible winning combinations in this bingo variant – one line, two lines and a full house.

75-ball bingo is the version that’s most commonly played in North America, particularly the US. The bingo ticket for this game features a five by five grid and for some of the 75-ball bingo variants, the midmost square remains empty, so there can be either 24 or 25 numbers on a ticket.

There are many branded variants of 75-ball bingo, as well as plenty of sub-variants depending on the possible winning combinations.

This is a bingo variant that’s considered to be a cross-over between the two most popular variants, the British 90-ball bingo and the American 75-ball bingo. The layout is four by four and the four rows are marked in different numbers – red, yellow, blue and white.

This is a very fast and dynamic variant and that’s why it is very popular online, especially among players who are looking for a fast game. There are three options when it comes to how many numbers are drawn before the game is over, it could be 20, 22 or 24. Players have a better chance of winning with a 24-number draw, but the potential prizes are lower.

Similar to progressive slot games, these bingo games are the preferred option for many players thanks to the winning potential and the growing prizes. In these games there isn’t a limited number of balls that can be drawn, instead the potential winning amount grows with each draw, unless someone wins the game. So, the later someone wins, the more money they’ll get.