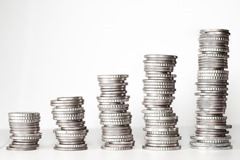 The crypto world is already full of many confusing terms, and that was before throwing the words coin and token into the mix. It is not uncommon for new investors to interchangeably use the terms token and coin. However, knowing their different meanings becomes essential when browsing through investments on a site like crypto exchange or if you decide to build a cryptocurrency of your own.

Traditionally, we define a coin as a piece of metal issued by the government as a store of value. In comparison, a coin in crypto is a means of payment or medium of transfer. Coins take the form of native blockchain tokens and are a variation of Bitcoin’s original code. Some common coins are Bitcoin, Ethereum, Litecoin and Ripple. We can refer to all these coins as cryptocurrencies, and coins that aren’t bitcoin are known as altcoins since they are an alternative to bitcoin.

Developers build each coin a separate blockchain making it completely independent. The concept of coins existing on their own blockchain allows the coin to have the most independence and flexibility. The company that started it can decide on every aspect of the cryptocurrency, including the consensus algorithm, fees, and transaction mechanism.

Cryptocurrency coins offer the greatest flexibility but are expensive to build and need large communities to support and adopt them.

What is a Token?

A token is an asset that exists on top of another blockchain and offers functionality greater than digital cash. Tokens are representative of any asset that is fungible or tradeable, including a utility, tradable commodity, digital art, or loyalty points. Tokens are typically easier to create than coins since developers can use an existing template available on a blockchain platform. This is more time-efficient than creating a code from scratch. Just about anyone can create their own token. On the Ethereum network, users follow an ERC-20 technical standard for the use of smart contracts to implement tokens. The term ERC stands for Ethereum Request for Comment, with developers assigning number 20 to this request.

Crypto tokens are used for fundraising crowd sales and circulated through a standard initial coin offering (ICO) process. An ICO is the cryptocurrency version of an initial public offering (IPO). Developers design tokens for specific crypto-projects, which holders can use as payment methods within certain platforms. Investors may also choose to hold onto their tokens as “stakes” in a cryptocurrency company. It is important to note that tokens may work as a side project to help bring money to the main cryptocurrency business or represent other real assets.

Cryptocurrency tokens are quick and easy to develop. They also require no maintenance since they are dependent on the main blockchain. Some examples of tokens include Tether, Chainlink, and Hedgetrade.

We can summarize the additional differences between coins and tokens as follows.

Developers build coins on their own blockchains. In contrast, developers create tokens on a smart contract on an existing blockchain.

Coins have money utility and can validate transactions. Holders may also use coins in the process of staking. Tokens are digital representations of an asset.

Users can trade coins with little to no fees. Although exact fees are dependent on the blockchain, they are based on. Tokens require a gas fee to allocate EVM (Ethereum Virtual Machine) and execute instructions based on their smart contract.

Although secure, coins are still susceptible to a 51% attack. A 51% attack is an attack by a miner that owns at least 51% of the network’s computation power and can conduct a majority attack. These attacks are typically more probable in the creation of a new coin on a new network. Tokens are built on existing networks and are less likely to encounter these attacks.

Should I invest in a token or coin?

Cryptocurrency users continue to muddle the lines between coins and tokens. Token users use tokens to transfer value, similar to how the USD or shares in a company can. It is also possible for investors to find coins presented like tokens on 2.0 platforms. An example of this is LH on Ethereum.

However, now that you know the difference between a coin and a token, it should be clear that coins and tokens do not replace each other. Instead, they serve different purposes. As an investor, it is important to note that both tokens and coins can be traded on exchanges and purchased the same way. If you want to invest in one or the other for the sake of using it, it is important to determine which vendors accept that currency.

← What Makes Good Network Cabling & How To Choose Service Providers?
CAFM – How It Can Help Your Business →