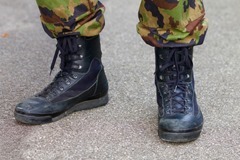 Soldiers wear all kinds of gear. There is no doubt about that, and it is usually dozens if not hundreds of pounds of gear, so yes, it all gets pretty heavy. You have guns and ammo, flak jackets and vests, first aid gear, radios, and so much more, not to mention the clothes. Yes, firearms are of course necessary for a soldier to have in any case, but what a lot of people don’t think about is how important it is for military personnel to wear the right footwear, such as the combat boots found at authorizedboots.com. So, why do military wear boots?

One of the reasons why military personnel wear boots is simply due to comfort. Soldiers are prone to walking around all day long, and in a live combat situation, this could mean running around for literally days on end without rest. Have you ever walked for 8 hours straight in a normal pair of shoes? The point is that soldiers need to have boots with good arch support, a good midsole, and good ankle support too.

Soldiers need boots that can absorb the impact caused by each step taken, whether walking or running, good padding that can take that impact and absorb and distribute it, instead of letting it all hammer into the foot. Without the right boot, the soles of a soldier’s feet can get real painful real quick. Moreover, ankle support is also a big deal, because when running around, all it takes is an uneven step on a rock or stick to roll an ankle, and for a soldier in the middle of a firefight, a rolled or broken ankle can spell doom. It’s all about comfort, support, and being free of pain.

Another reason why military personnel wear boots is to protect their feet from the elements, mainly either heat or cold, but from moisture too. Sure, the boots worn in a desert operation are going to be a lot thinner and lighter than those intended for an arctic military expedition, but the point is the same. Winter combat boots will keep a soldier’s feet warm, stop them from getting frostbite, and will allow a soldier to continue on without losing toes.

On the other hand, if it is really hot, a soldier needs good boots so their feet can breathe easily, so they don’t overheat, get really sweaty, and cause blisters. Another big point here is that good combat boots are intended to keep a soldier’s feet dry. This is a really big deal because having wet feet for a prolonged period of time can be very problematic.

Soldiers in WW1 often suffered from trench foot, a condition caused by long periods of feet being wet and cold. At the very least, this can immobilize a soldier, and at the worst, it can lead to death.

Yes, it is war, and it is what soldiers do, and yes, it is dangerous. There is just no getting around the fact that a battlefield is a scary and dangerous place. So, anything and everything that can protect a soldier from harm, from top to bottom, is not only ideal, but totally necessary. A good pair of combat boots can help protect a soldier’s feet from various forms of damage.

At the very least, they will have steel plates in the soles, to stop sharp objects from penetrating through the bottom. They will usually always have some kind of reinforced toe as well, so falling debris does not crush the foot. Finally, the best of the best combat boots may even be outfitted with Kevlar, or in other words, they may be bulletproof. However, finding bulletproof boots is pretty rare, and at the very least, super expensive.

As you can see, military wear boots for some pretty important reasons. Whether it is a falling rock from an explosion, a rolled ankle, a nail in the ground, or mother nature pelting a solider with snow and extreme cold, a good pair of combat boots can undoubtedly save a life.

← The Ultimate Guide to Buying the Right Digital Camera
Dog Technology: How New Inventions Can Change Our Relationship w/ Dogs →