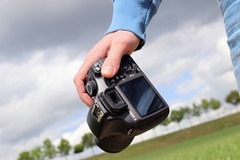 When the “Brownie” camera by Eastman Kodak was launched at the beginning of the 20th century, it was clear that a revolution had begun. While this primitive camera which looked like a cardboard box just had a roll of film and a lens, it would set the tone of what we now have today.

Though having a camera in the early 1900s was pretty rare, these days it is not uncommon to find a camera in almost every home around the world. Cameras have come a long way from large cardboard boxes with a roll of film and lens. Now even a regular mobile phone is fitted with a camera.

As a matter of fact, if there is one thing that you are almost certain to find in the home of most people, it would be a mobile phone camera on which they also play online slots UK. In some way, this has made the demand for a specialized camera drop as many smartphones are just as sophisticated as any hand-held camera.

Specialized cameras come in different brands and they can be inexpensive or really very pricey items. If you need a camera for a project or as a professional, you need to know which specialized camera you can go for. With this simple guide, you will get to know what camera is perfect for your needs.

Also, known as a compact camera, the point and shoot camera is as easy as they come. All you need to do is focus on the image you want to snap and just click away. Typical point and shoot cameras are inexpensive (between $100 to $200), lightweight/portable and easy to operate, similar to your mobile phone camera.

However, these cameras like your mobile phone camera usually do not come with a lens that is interchangeable. In truth, with the advent of smartphone cameras, the demand for point and shoot cameras has hit rock bottom. However, there are some point and shoot cameras with added features that cannot be found on smartphones, such as big sensors and even zooming capabilities.

If you prefer buying this type of camera, then, try to buy those with extra features. Typically, a 1-inch sensor camera will give you a much sharper quality. These type of cameras cost between $500 to $1,500 and they may be much larger than your average compact camera.

For a much more advanced camera that offers better quality, performance and creative features than compact cameras, you can go for either the Mirrorless or DSLR camera. The difference between Mirrorless and DSLR cameras is that unlike the latter, the former has no mirror and an optical viewfinder.

Mirrorless cameras are set in “live view mode” at all times whether you are viewing through an EVF or electronic viewfinder or the LCD display screen. Mirrorless cameras are usually more expensive (starting from $500 to as high as $10,000) than typical compact cameras. Some examples are Sony A7 III, Nikon Z6, Panasonic G9 and Fujifilm X-T20. DSLR cameras also cost as much as mirrorless cameras. Some professional models which you can opt for include Nikon D5600, Nikon D7500, Canon Rebel T7i and Canon EOS 80D.

← From Disney+ to Google Stadia – How Streaming is Transforming the Media World
Why Do Military Wear Boots? →