The Radeon 7970 is here officially and it’s taken claim of the world’s fastest single-GPU card. With such a claim to fame you’d expect a high price and you’d be right as on January 9th you’ll have to shell out $549 to get the this beast for your computer system. This card is the only single-GPU on the planet based on 28nm production technology and supposedly offers a 150% performance boost over last gen cards. It kinda makes my 6000 series card fell old I think… 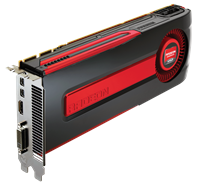