Boost Mobile just announced two new 4G LTE Android phones. The first one is the HTC One SV which features a 1.2ghz dual core CPU, Android 4.0, a 5mp rear camera and a 1.6mp front camera with a price of $299.99. The other phone is called the Boost Force and it features Android 4.0, a 5mp read camera and 1mp front camera along with a 1.5ghz dual core CPU and it’s priced at $199.99. Both phones feature 4G LTE and both can be used on the Boost shrinking payments plan that offers users a $5 discount per month on their bills for six consecutive payments and both will be available on March 7th.

Both Android-powered smartphones pair the speed of 4G LTE with the value of Boost Mobile’s no-annual contract $55 Android Monthly Unlimited with Shrinking Payments plan. For every six on-time payments, the cost of Boost Mobile’s Android Monthly Unlimited plan shrinks by $5, eventually getting down to as low as $40 a month for unlimited nationwide talk, text messaging, Web, email and calls to 411. Payments do not need to be consecutive to qualify for the next savings milestone. 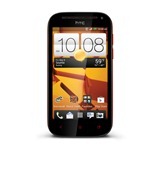 Priced at $299.99 (excluding taxes), HTC One SV is ideal for customers who desire an affordable superphone for a no-contract offer. With a bold color and sleek, ergonomic design, HTC One SV is equipped with a large 4.3-inch touchscreen and a speedy dual-core processor. Running HTC Sense® 4 on Android™ 4.0, HTC One SV features HTC’s Amazing Camera and Authentic Sound experiences. The rear camera is capable of 1080p HD video and one-press continuous shooting. HTC VideoPic™ gives it the ability to take photos and video at the same time. The front-facing camera takes gorgeous self-portraits. Available exclusively on HTC smartphones, HTC One SV also features Beats by Dr. Dre™ Audio integration for studio-quality sound across music, movies, games and media. Additional features include:

Additionally, HTC One SV is HTC’s first and Boost Mobile’s second device to include ULE Platinum Certification, the highest level of environmental performance recognized by sustainable requirements established by UL Environment and Sprint, and is packaged in 100 percent recyclable materials.

HTC One SV and Boost Force will both be available starting March 7 at Boost Mobile’s exclusive retail stores, select independent wireless dealer locations nationwide and at www.boostmobile.com with free shipping. Both devices will be available later in March in select national retail locations.