I always giggle a little when I hear the name DODOcase, I just find it rather humorous.

DODOcase announced today that their hotly anticipated iPad 2 cases are now available for purchase. The DODOcase for the iPad 2 comes in the classic DODOcase style, with a choice of eight color-linings, as well a special limited edition DODOcase commemorating the launch of the iPad 2, along with DODOcase’s one-year anniversary. 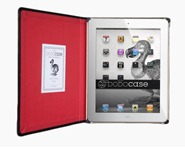 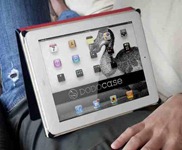 DODOcase quickly rose to popularity following their launch alongside the iPad in April 2010. Overwhelming community response led to notable critical acclaim from such varied publications as GQ, Vogue, and Vanity Fair, and was eventually awarded MacWorld’s 2010 case of the year. Handmade by local artisans in San Francisco using traditional bookbinding techniques, every DODOcase has its own unique character. The DODOcase team is thrilled to have given new life to the art of traditional bookbinding by adapting it to the world of e-readers.

“Only a year after launching DODOcase, the iPad 2 offers us yet another opportunity to continue our support and preservation of the few remaining bookbinders left in San Francisco,” said Patrick Buckley, co founder and CEO of DODOcase. “We are proud to offer quality, handmade products, and look forward to future success with the iPad 2.”

In keeping with the company’s founding philosophy, DODOcase is offering individuals the opportunity to donate 10% of their iPad 2 case purchase. At the buyer’s choice, and between March 9, 2011 and March 14, 2011, 10% of sales will be donated to SFMADE, San Francisco Center for the Book (SFCB), or Leukemia & Lymphoma Society, three DODOcase relevant non-profits.

“The DODOcase philosophy has always been about manufacturing local and keeping the art of book binding alive” added Craig Dalton, co founder and President of DODOcase. “We’re ecstatic to have the opportunity to support that philosophy by offering some great local and national non-profits our support through individual’s purchase of a DODOcase for the iPad 2!”

The DODOcase Classic for the iPad 2 is available with a choice of Red, Green, Charcoal, and Sky Blue lining for $59.95, or with a choice of Dark Blue, Orange, Pink, or Purple for $64.95. The Limited Edition DODOcase for the iPad 2 offers a design influenced by the iPad 2’s incorporation of the white aesthetic and is available for $89.95 and for a limited time only. For immediate purchase of a case, or for more information, please visit: http://www.dodocase.com.