The Cat in the Hat and the Grinch are now available on your Android phone in the form of apps, or ebooks, or it’s actually a combination of both an app and an ebook. As long as you’ve got Android 2.1 or higher then you can install them for only $3.99 each. These are just the first couple to come to Android from Oceanhouse Media with more on the way.

The Cat in the Hat and How The Grinch Stole Christmas!, both written by Dr. Seuss in 1957, have been adapted for the first time to interactive book format for Android devices. Both were initially introduced by Oceanhouse Media as iOS apps (iPhone, iPod Touch, iPad). The iOS apps have been runaway hits, ranking among the best selling apps in the Books category last year. Oceanhouse Media’s Dr. Seuss apps have received critical acclaim and won numerous awards from various organizations, such as Parent’s Choice Awards and Children’s Technology Review. 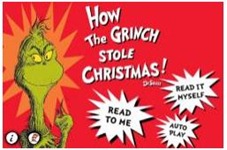 As with all of Oceanhouse Media digital books, these interactive apps are engaging and educational. To promote reading in young children, individual words are highlighted as the story is read and words zoom up when pictures are touched. By combining original text and artwork with professional narration, custom background music and audio, special effects and features that entertain and promote reading, these digital books appeal to readers of all ages.

“Generations have grown up reading books by Dr. Seuss. Now this generation can enjoy digital versions of those books on their Android devices,” said Susan Brandt, President of Dr. Seuss Enterprises. “We have found a wonderful partner in Oceanhouse Media and are thrilled with the quality and features of the Dr. Seuss apps.”

For more information on these and other products please visit the Oceanhouse Media website.