I’ve never heard of KTC but I just got heir PR about their showing at Computex this year where they launched several new Android tablets and they seem decent. The tablets are Cortex A9 and A7 based, which isn’t much of a surprise, but the design is what interested me. The eight inch H8 tablet has a 1280×800 IPS screen and it’s only 8.7mm thick and 123mm wide and it has a quad core CPU, 1gb ram and 8gb rom and even a sim card slot along with a 2mp front camera and a 5mp rear camera. More details below.. 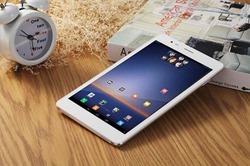 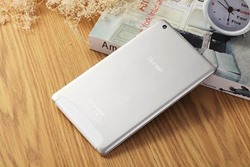 With mobile internet reaching into more aspects of life, basic forms of social interaction and work have changed significantly. Simply by touching the screen, one can communicate with others, obtain real-time information and use applications for office productivity, entertainment and relaxation, all of which are based on the rapid popularization of smartphones and tablet devices.
In 2014, the tablet has ushered in an unprecedented peak of use. While its appearance gets thinner and more fashionable, quad-core CPU and octa-core GPUs have become standard configurations for higher performance tablets. The integration of 3G call functioning allows the tablet PC to serve as a smart phone, expanding its application scope.

All new products will be showcased by KTC during Computex 2014.

For many customers, the performance of a tablet PC is a basic requirement in purchasing, while the design, manufacturing technology and applications are also very important. Now, KTC is releasing a brand-new tablet PC as an optimal choice for customers. KTC might not be a stranger to you, for it has taken a foothold in the market of panel displays with its public reputation of fine workmanship and a sound sales system. The expected H8, a new generation of 3G tablet PC, adopts a quad-core CPU and an octa-core GPU, 8-inch 1280×800 HD IPS screen, 4×1.2Ghz MTK8389 tablet solution based on the Cortex-A7 architecture, and 1GB DDR3 RAM. It is running on the stock Android 4.2 OS, featuring a 6mm narrow-bezel design.

The elegant design is the key in catching the eyes at first glimpse. As a new generation of 8-inch tablet PCs, the H8 Ultra Thin Elegance adopts a new design, which boldly embeds an 8-inch screen onto a nearly 7-inch frame to present an extremely comfortable visual feeling. The 6mm super-narrow-bezel design achieves a terrific visual effect. The 123mm width has shrunk by 11mm compared to the iPad mini, so that it will be easier for the user to operate and control. The H8 also gets thinner, reaching 8.7mm. The whole device shows an elegant appearance while being consistent with current fashion.

The H8 adopts a 1.2GHz quad-core MT8389 processor based on the Cortex-A7 architecture, an octa-core Power VR SGX 544MP GPU, 1GB RAM, and 8GB ROM. The design combines the requirements for high performance and low power consumption, meeting the demands of daily use with long duration.

In order to bring a perfect visual experience to the customer, the H8 is equipped with the newest generation of 8.0-inch 1280×800 HD IPS screen, with a PPI enhanced over 15% from the previous screens. It makes images and text displayed clear and vivid, providing a visual viewing angle of 178°. Its 32-bit color depth and dynamic definition technology enhances the visual effect; meanwhile, the aspect ratio of 16:9 also presents an excellent visual experience for watching films and playing games.

The H8 also supports 3G calls. By inserting a SIM card, you can achieve telephonic functions, internet surfing and receive the latest info to meet your daily communication demands. With this feature, you will not miss any important calls or messages, keeping you in communication with your friends at any time and place.

The H8 is equipped with two camera lenses with the front camera having 2M, and the rear camera sporting 5M. The front camera enables you to have video calls while the rear camera has the function of automatic focusing and touch focusing. The pictures can be shared to WeChat, MicroBlog, and other platforms. In addition, the H8 also integrates the rich functions of GPS navigation, automatic light and proximity sensors, HALL effect sensors (used for proximity switching) and a gravity sensor. Configured with the Android 4.2 system, it will bring a comprehensive user experience to customers.