Lots of new gaming stuff going on lately. Lego Universe goes back in time, check out the screen shots and video:

Players must seek out the bold Venture League time traveler, Wenn Wuzzit, in Nimbus Station and use his time-twister device to travel back in time. Daring Minifigures can join forces in a new four-player battle instance, and face off against thirty menacing waves of new enemies and bosses. Gain the upper hand against the Four Riders of the Maelstrom in the fiercest showdown of LEGO Universe history. 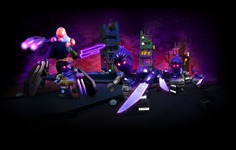 In addition to the Nimbus Station battle, LEGO Universe is also releasing new building missions and achievements for players who love getting creative in their Property Worlds. Four new Daily Missions and twelve new Achievements will treat players to rewards like Faction Tokens, Mega Brick Booster Packs, and the brand new Doom Star and Behavior Model Sets – all for building and programming whatever they dream up with virtual LEGO bricks.

Learn more about how you can explore LEGO Universe at www.LEGOuniverse.com!