So this is a big press release from Linksys, they smartly decided to combine their announcements into one message instead of several. At CES this year Linksys announced several products including new routers but the most interesting is the NAS or what they call it, Network Storage Bay, and it matches the router and sits right underneath it. See below for everything… 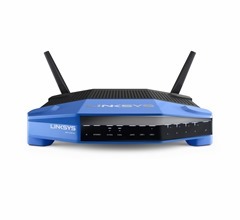 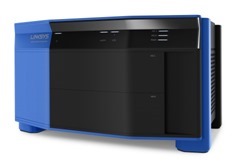 The new four-pack of High-Gain Dual Band antennas features 7dBi on 5Ghz and 3dBi on 2.4Ghz band as well as omni-directional for range enhancement where it’s needed in a home or office. Other features include standard RP-SMA mount antenna connector for use with any router that uses this connector, superior PCB substrate for improved efficiency, and radiation patterns optimized across multiple frequencies providing up to a 30% increase in performance.

In collaboration with Marvell, Linksys is happy to announce that the open-source Wi-Fi driver for the WRT1900AC has been released to OpenWrt. This driver has been incorporated into the latest open source firmware image snapshot, available here (Command line interface experience recommended):

This is an initial release, with plans to send the driver to the upstream Linux kernel after refinement. Full open source firmware is planned to be available for the WRT1200AC router at time of release.

“Linksys is all about quality and performance. We wanted to expand on our WRT line to provide customers a whole home networking solution that extends the WRT networking experience throughout the entire home or office via storage solutions or additional range,” said, Mike Chen, vice president product management, Linksys. “The new WRT1200AC router enables us to cater to an audience that want all the benefits of a WRT router but at more friendly price point.”

Linksys has built a new Wireless Dual Band router equipped with MU-MIMO technology in the EA8500. The new router includes the quality and performance users can expect from a Linksys wireless router including a Qualcomm Snapdragon 1.4GHz Dual-Core Processor, wireless speeds up to AC1733 + N800*, four Gigabit ports, One Gigabit WAN port and an eSATA, USB 3.0 and USB 2.0 ports. The MU-MIMO capability enables more devices to run simultaneously with the best performance on the market today. This means multiple devices such as laptops, tablets, phones, and music players can all be streaming at the same time with the best wireless connection possible for the best home wireless experience.

Smart Wi-Fi is a software based management tool that helps users simply set up their router, and manage and control their home network via a dashboard on a PC, tablet or smart phone while at home or away. Smart Wi-Fi also provides a host of features including guest access, parental controls, remote access of other family or friend networks as well as easy references to passwords or network controls. Linksys is announcing the latest new features to be included on Smart Wi-Fi that are planned to roll out in Q1 calendar year via a firmware update:

Smart Wi-Fi is available on all Linksys EA and WRT series routers.

Range Extension in homes is the fastest growing networking solution on the market, Linksys has experienced more than 96% growth in range extender sales since June of 2014 because customers are adding more devices to their network in more rooms throughout the house and their need for wireless bandwidth is at an all-time high. Customers are purchasing range extenders to help get their Wi-Fi signal in their basements, out to their porch or even in a back bedroom. To help customers get Wi-Fi throughout their home Linksys is introducing two new Range Extenders – the N600 Dual Band Range Extender and the Wireless AC1200 Dual Band Range Extender. Both new range extenders also come equipped with the new Spot Finder Technology to help customers place their range extender in the optimal spot for the maximum performance.

The Linksys RE4100W helps eliminate Wi-Fi dead spots throughout the home by increasing the wireless signal of an existing router up to 7,500 Sq. Ft. RE4100W extends the wireless coverage and features Cross-Band technology allowing the Wi-Fi signal to receive information on one band and transmit on another. The result is a stronger, more consistent signal throughout the home. Also featuring audio streaming with a 3.5mm audio jack so users can connect to speakers to wirelessly stream music from a smart phone, tablet or other music equipped device. A Fast Ethernet port provides hardwire connectivity for digital devices allowing users to experience faster streaming and gaming. The RE4100W Wi-Fi Range Extender can be plugged directly into a wall outlet and setup is simple and fast.

The Linksys AC1200 Range Extender helps eliminate Wi-Fi dead spots throughout the home by increasing the wireless signal from an existing Wireless-AC router. With up to 10,000 Sq. Ft. of coverage, the RE6700W also comes equipped with Cross-Band technology, which enables the Wi-Fi signal to simultaneously receive data on one band and transmit on another. The result is a stronger, more consistent signal throughout the home. Designed for AC power pass-thru, (so you won’t lose a plug for other devices) and four Gigabit Ethernet ports, users can hardwire their devices for faster streaming and gaming. Music fans can connect a stereo system or audio speaker to the RE6700W and stream music from a smart device or computer. The Wi-Fi range extender is designed for flexible placement options so users can enjoy all their devices, from anywhere in their home.

Linksys WRT1200AC Router planned for availability this spring for an MSRP of $179.99

Linksys WRT Storage Bay is planned for availability this spring for an MSRP of $129.99

Linksys WRT 4-Pack of Custom Antennas are planned for availability this spring for an MSRP of $129.99

*Maximum performance derived from IEEE Standard 802.11 specifications. Actual performance may vary, including lower wireless network capacity, data throughput rate, range and coverage. Performance depends upon many factors, conditions and variables, including products used, interference and other adverse conditions. Specifications are subject to change without notice. An active, customer-purchased Internet Service Provider broadband account is required for connection of these routers and other connected computers and devices to the Internet. Some devices may require additional wireless adapters or an Ethernet cable to connect to these routers.

‡May require a software/firmware update available for download at linksys.com/support.