So I’m back.. was sort of off yesterday, but it wasn’t planned.. we had high winds and rain and stuff like that which caused a power outage so I didn’t get much done with no power. Today Verizon is launching the Novatel 4G MiFI 5510L Hotspot for $49.99 with a two year contract. The battery is supposed ot provide up to eight hours on a single charge so that should be more than enough to get your though the work day. 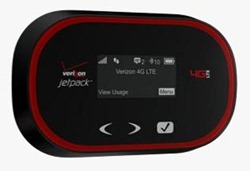 The MiFi 5510L is a personal mobile hotspot providing Internet connectivity on the go and capable of sharing high-speed 4G LTE broadband Internet connectivity with up to 10 Wi-Fi enabled devices simultaneously. The MiFi 5510L features capacitive touch navigation keys for quick and easy access to essential device details and supports the latest security requirements that some of the strictest corporate VPNs require, including VPN Pass-through and SPI Firewall. It includes new features such as real-time reporting of data-usage so the user can quickly understand how much data they have left to use on their monthly plan, IPv6 end-to-end support and a long lasting battery providing up to eight hours of continuous use on a single charge.

“We are excited to launch our fifth 4G LTE MiFi mobile hotspot and to be able to provide portfolio offerings for both value and premium segments of the market,” said Rob Hadley, CMO of Novatel Wireless.

Verizon Jetpack™ 4G LTE Mobile Hotspot MiFi® 5510L will be commercially available online at www.verizonwireless.com on January 31, 2013 and will be in Verizon Wireless stores in the coming weeks. The device will sell for $19.99 after a $50 mail-in rebate with a new two year contract.