Orange Amplifiers, the British based pioneering force in guitar amplifiers, are proud to announce the launch of the revolutionary all-in-one computer amplifier speaker – The OPC.

The project has been several years in the making and as a pioneering force in guitar amplifiers, they have used their expertise in sound technology, engineering and electronics to build a new generation of computers that incorporate the best of both worlds: latest computer technology with integrated tools for the modern musician and music lovers. 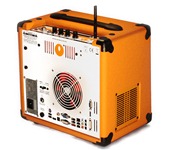 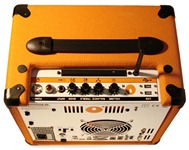 The revolutionary all-in-one computer amplifier speaker – The OPC is 100% designed and built in the UK. It is a fully integrated computer with internal speaker which delivers playing, recording, editing and computing capabilities to musicians and music aficionados. This is the first computer of its kind that you can connect yourself and your music to the digital world simply by plugging in your instrument.

The OPC will be leading the way with a number of ‘Firsts’:

As a fully fledged computer it has 4GB DDR2 RAM, 500GB Hard Drive, Intel chips, Windows 7 x64 home premium, 8 x USB2.0 ports, is Wi-Fi enabled and has a graphics card with optional ATI 5670 512MB card for those who may want to play a few games while they put their guitars down. The first models will include modelling software incorporating computer samples of vintage and current Orange amps and cabinets as well as free branded recording software package. Once plugged in, you can then use the software included to create music or choose your guitar sound and then play, record and hear your guitar through the computer!

The OPC is compact, very portable, sexy and beautifully Orange! It takes many of its design cues from Orange’s, instantly recognisable, brightly coloured Orange Amplifiers and picture-frame cabinets and once again makes Orange stand out from the crowd.

The OPC is due to be released in June 2010 and the price will be announced shortly. For further information news please see the website www.orangeamps.com