There was a time I would love to have one of these but my HTC One doesn’t have a mciroSD slot. I haven’t missed having the extra storage either, you just kind of make due with what you have. That’s not saying I wouldn’t mind one of these for one of my tablets, but I’m not sure it would even work with them. The new Sandisk 128gb microSDXC card has an MSRP of $129.99 and it’s out now at all the popular sites. 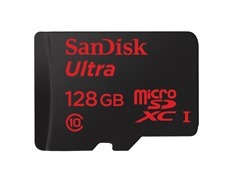 MOBILE WORLD CONGRESS – SanDisk Corporation, a global leader in flash storage solutions, today announced the new 128GB2 SanDisk Ultra® microSDXC™ UHS-I memory card, the world’s largest capacity microSD card. Smaller than the size of a fingernail, the new SanDisk Ultra microSDXC card enables consumers to use their phones and tablets as if storage limitations were never a concern, allowing users to capture thousands of songs and photos, and hours of video on a single, removable card.

A new version of the SanDisk® Memory Zone app (available on the Google Play™ store in beta) lets users easily view, access, and backup all of their files from their phone’s memory in one convenient place. As a part of the SanDisk Memory Zone app, SanDisk is releasing OptiMem™, a new feature that allows Android users to enhance their phone’s internal memory by automatically transferring some of their old photos and videos to their microSD card4. OptiMem will continuously monitor the user’s mobile device memory levels, and inform them whenever the internal memory falls below a pre-defined threshold.

Compared to when the microSD card format was first launched in 2004 with 128MB of capacity, SanDisk has increased storage capacity of microSD cards 1,000 times over in less than a decade with the 128GB SanDisk Ultra microSDXC card. To enable 128GB of storage on a removable microSD card, SanDisk developed an innovative proprietary technique that allows for 16 memory die to be vertically stacked, each shaved to be thinner than a strand of hair.

SanDisk Corporation (NASDAQ: SNDK), a Fortune 500 and S&P 500 company, is a global leader in flash storage solutions. For more than 25 years, SanDisk has expanded the possibilities of storage, providing trusted and innovative products that have transformed the electronics industry. Today, SanDisk’s quality, state-of-the-art solutions are at the heart of many of the world’s largest data centers, and embedded in advanced smartphones, tablets and PCs. SanDisk’s consumer products are available at hundreds of thousands of retail stores worldwide. For more information, visit www.sandisk.com.

4 Download and installation required; see www.sandiskmemoryzone.com. The new OptiMem feature is available as a public beta in the Google Play store and will be generally available in early March. Please visit the Google Plus Community for more information https://plus.google.com/communities/117088614349521530063?hl=en&partnerid=gplp0