It looks like Sega is spreading some holiday cheer a little early. Starting December 20th and running until the beginning of January. Certain titles on Xbox Live, Playstation network and mobile titles will be drastically reduced for a limited time. All of the details are inside. 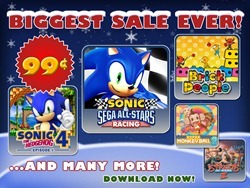 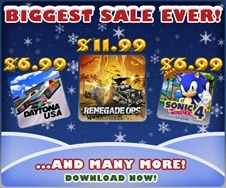 SEGA of America, Inc. today announced a host of festive discounts for hit titles on the App Store, PlayStationNetwork, and Xbox LIVE Arcade for the Xbox 360 video game and entertainment system from Microsoft. With sale prices of up to 80% off on select games, everyone’s sure to find something that would make an ideal gift for a friend… or for themselves!

On PlayStation®Network, players can snag everything from new titles to fan favorites for up to 40% off from December 20, 2011, to January 3, 2012, including:

For more information about the SEGA Holiday Sale, including a complete list of the titles featured on each platform, visit the official SEGA blog at http:/s.sega.com.