So Sprint just announced three new tri-band devices that will go on sale July 19th. These are the Netgear Zing mobile hotspot and the Netgear 341U USB modem along with the Novatel MiFi 500. These are tri-band as mentioned meaning they work on 800MHz, 1.9GHz and 2.5GHz networks. The devices vary in prices and sadly I couldn’t find a picture of any of the them on the Sprint website or the Netgear website but I did find the MiFI 500 over on the Novatel site, so I got a picture of that for you along with both press releases so you can at least read about them…

It still boggles my mind that companies put out press releases for new products but yet don’t include picture of those products?! It just makes no sense to me at all… 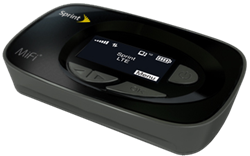 MiFi 500 LTE is among the first tri-band devices to join Sprint’s family of mobile broadband devices providing access to Sprint’s 4G LTE network at 800MHz, 1.9GHz and 2.5GHz. MiFi 500 LTE includes Novatel Wireless’ advanced software enhancements to the MiFi Technology Platform that extend usage time through more efficient use of battery capacity, so MiFi users will be able to stay connected longer without re-charging – while keeping a sleek and lightweight design.

MiFi 500 LTE will be available on July 19 for $49.99 (excluding taxes) with a new line or eligible upgrade, two-year service agreement and $50 mail-in rebate via reward card1, through www.sprint.com, 1-800-SPRINT1, retail stores and Business Sales.

MiFi 500 LTE allows users to enjoy all of the features they love about the MiFi intelligent mobile hotspot and more, including:

The launch of devices like the MiFi 500 LTE, which can operate on three spectrum bands, celebrates yet another milestone in Sprint’s rollout of Network Vision. Network Vision represents a nationwide update of the Sprint network leveraging the 800MHz, 1.9GHz and 2.5GHz spectrum bands and using the newest, most-advanced equipment in the industry. Sprint plans to consolidate multiple network technologies into one seamless network with the goal of enhancing network coverage, improving call quality and increasing data speeds for customers.

The three bands of spectrum accessible on these devices will provide Sprint customers a high-quality, consistently fast 4G LTE network experience, whether they are sitting at their desks, catching up with friends at a coffee shop, or relaxing on vacation.

800MHz spectrum being added to Sprint’s LTE network later this year excels at in-building coverage. This spectrum has been repurposed for LTE as Sprint ceased operations June 30 of the Nextel National Network.

Sprint’s 1.9GHz spectrum acts as the primary band in its 4G LTE nationwide build-out. Average performance falls in the range of 6-8Mbps, peaking at 25Mbps, for downlink and 2-3Mbps for uplink.

Customers will be able to purchase the NETGEAR Zing Mobile Hotspot for $49.99 (excluding taxes) after a $50 mail-in rebate via reward card2 and the NETGEAR 341U USB Modem for $19.99 (excluding taxes) after $50 mail-in rebate via reward card2. Pricing for both devices requires a new line or eligible upgrade, a two-year service agreement and can be purchased through www.sprint.com, Sprint retail stores, 1-800-SPRINT1 and Sprint Business Sales.

The NETGEAR Zing Mobile Hotspot is the first 4G LTE mobile hotspot from Sprint with international capabilities using GSM roaming. With this versatile device, Sprint customers can extend their experience beyond their laptops to up to 10 Wi-Fi-enabled devices, such as tablets, laptops, cameras, music players, personal media players and portable game consoles.

The device is also the first mobile hotspot from Sprint with a 2.4-inch LCD touchscreen display, offering the ability to drill down into the settings menu with just a tap of the finger to adjust settings like brightness, network settings and Wi-Fi options. It is simple to set up and connect with no software required and users can expect up to 10 hours of battery life with the 2,500mAh battery.

The NETGEAR Zing Mobile Hotspot will be the first mobile hotspot that meets Sprint’s environmental specifications and marks an expansion of Sprint’s sustainability leadership beyond offering phones with eco-friendly attributes. Sprint and NETGEAR worked closely together to extend the device’s environmental attributes, boasting a high recyclability rate (75 percent), minimal use of environmentally sensitive materials, and 100 percent recyclable packaging. Sprint will continue to work with other manufacturers to achieve similar environmental attributes for hotspot products going forward.

For those who prefer a plug-in option, the NETGEAR 341U USB Modem will be the first tri-band 4G LTE-capable USB modem from Sprint. This small yet powerful device features a built-in LCD display to monitor connection status, signal strength and data usage with a quick glance. With no installation CD required or startup delay, the NETGEAR 341U USB Modem makes it easy to stay productive on-the-go without having to constantly hunt for public Wi-Fi. Other great features include integrated GPS for location-based services, and a unique foldaway USB swivels 180 degrees.