The Gang from Radiator Springs is back! 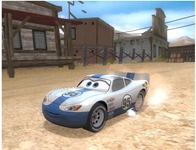 For more information on the Cars Race-O-Rama video game, please visit www.carsvideogame.com. Information on the rest of THQ’s line-up of family-friendly titles can be found on www.playthq.com.

Pixar Animation Studios, a wholly-owned subsidiary of The Walt Disney Company, is an Academy Award®-winning film studio with world-renowned technical, creative and production capabilities in the art of computer animation. Creator of some of the most successful and beloved animated films of all time, including Toy Story, Finding Nemo, The Incredibles, Cars, Ratatouille, WALL•E and most recently, Up. The Northern California studio has won 21 Academy Awards® and its ten films have grossed more than $5 billion at the worldwide box office to date. The next film release from Disney•Pixar is Toy Story 3 (June 18, 2010).

THQ Inc. (NASDAQ: THQI) is a leading worldwide developer and publisher of interactive entertainment software. The company develops its products for all popular game systems, personal computers and wireless devices. Headquartered in Los Angeles County, California, THQ sells product through its global network of offices located throughout North America, Europe and Asia Pacific. More information about THQ and its products may be found at www.thq.com. THQ and the THQ logo are trademarks and/or registered trademarks of THQ Inc.