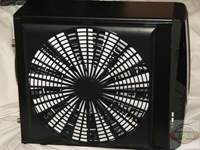 When you’re building a custom system for yourself or someone else you’ll need to buy a case, and  if you look around you’ve got plenty of choices in all shapes colors and sizes. What sets one case apart from the others? Which case is the right one for you? What will the system inside be used for? These are just a few of the questions you’ll want to ask yourself when deciding on what PC case to purchase.

Today for review I’ve got a PC Case from our friends at AeroCool, it’s called the AeroRacer Pro and it’s certainly a case that sets itself apart from all of the others out there today. The AeroRacer features a large power button labeled ‘Engine Start’, and while that’s a cool little feature, what really makes this case stand out is the fan used to cool the case. The fan for the AeroRacer is a whopping 40cm in size, it takes up most all of the left side panel, and it’s fairly silent as well. It claims to be the biggest side panel fan in the world and I believe it, at least I haven’t seen anything quite like it out there yet.

So continue on to learn more about he AeroRacer Pro..

First up is the unboxing video, it’s rather long so sit back relax and enjoy the show:

For just how large the side fan is I was surprised that the low level of noise coming from it. You can barely hear it from two feet away and farther not at all, it’s just a low hum when you’re close  to it. One thing though about the fan is that there’s no dust filter with it, so considering how much dust a little 120mm fan can pull into your system, this thing will be pulling in massive amounts of it, it needs to have a filter. 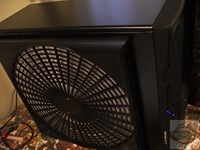 I don’t like the fact that there are no exhaust or intake fans on the case, but with such a large fan moving a large volume of air you might not need it. I checked the temperatures of my system before and after moving into the AeroCool  AeroRacer Pro, and they were virtually the same, with the AeroCool being about one degree cooler on average, so apparently the 40cm fan does a good job. I’m sure if we added more fans to the case we’d get even better performance overall.

I also found the USB ports on the side a bit too close together, if you’ve got two wide connections, like fat USB drives, you’re not going to be able to connect both at the same time.

Conclusion:
The AeroCool AeroRacer Pro could be a great case for overclockers looking for good airflow, this thing will give you a huge amount of it.

The AeroRacer is well made, and there’s a lot of room in it as well for most any system.

The lack of intake and exhaust fans is something that doesn’t matter too much when considering the performance without them.

This case comes in at a little over $100, which I think is a bit much really, the only real feature is the 40cm fan, other than that the case offers not much else to deserve such a high price tag. You can easily get a comparable case for about half price, just without the 40cm fan on the side.