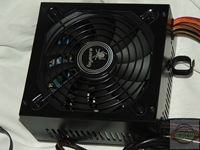 When building a computer there is one component you need to consider the most, this component or part is probably the most important on in your system and it can literally make or break it. The power supply is the single most important part of your system, it doesn’t matter what other components you have in there, or anything else, you could have the most high end, super secret, top quality parts, but if your power supply isn’t any good all of those expensive parts are essentially worthless. A bad power supply can shorten the lives of components and even possibly kill them altogether, so it’s very important that you purchase a good quality, stable and reliable power supply for your system

Today I’ve got the bgears b-Tarantula 650Watt Power Supply for review, it’s a modular style PSU but it’s a unique style of modular connections. Most modular PSUs have cables that plug into a socket on the PSU, but the b-Tarantula has a short cable with the female connection on it coming from the PSU, this allows for making connections in tight cases easier. The b-Tarantula also features a very quiet 135mm fan to keep it cool and quiet as well. In my time with this PSU I’ve put it under quite a bit of load testing and found it to be very stable, quiet and an all around good power supply.

As usual first thing to see is the unboxing video, check that out and continue on to the specs and the rest of the review:

I had no problems installing the b-Tarantula in my case with my system, it’s an averaged sized PSU so it should fit in most any case except of course for specialized ones. 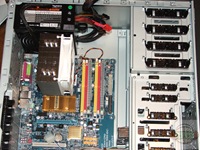 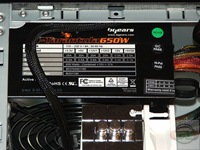 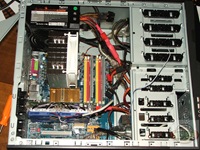 The bgears b-Tarantula is installed in my secondary test system where I’ve been in process of testing a few sticks of ddr3 ram over the past couple weeks so it’s got quite a work out with overclocking and playing with voltages and a lot of stress testing as well to test the stability of the ram, and of course quite a few benchmarks, so it’s gotten quite a nice workout since being installed.

The included 135mm fan seems to keep the PSU cool, and it’s very quiet, I couldn’t hear it at all over the rest of the system even while under load for hours at a time.

Power supplies are expected to run within certain tolerances, in fact they have to or they are considered out of spec and not good obviously. There are three main rails on your power supply, 3.3v, 5v and 12v, and these are the ones that we’re most concerned with. The 12v rail is essentially your main power rail, this feeds most all components their power and is the most important one in your system. The tolerance or acceptable variance is 5% for all three rails which would be:

For testing power supplies I use a multimeter, while this isn’t exactly the best or perfect way to do this, it works to give us an idea of the general stability and tolerance comparison of the individual power rails. There are several ways to access the voltages on a power supply, and the easiest is to use a molex to get to the 12v and 5v rails, but when you’ve got a PSU like this one today with multiple rails you need to check every connection available to make sure you test both rails. The b-Tarantula has the modular connections that are essentially universal making testing easier, the open leads coming from the PSU have access to all three power rails in them.

I tested the rails both at idle and at load, to achieve load I ran both Orthos Stress Prime and 3dMark06.

As expected the rails dropped under load, this is normal, considering they only dropped .1v, that’s exceptional, many PSUs out there will drop quite a lot when under load from their idle voltages. The 3.3v rail is a bit high but well within tolerances, during load the rails did not move at all, they were extremely stable and unwavering so overall this PSU is very stable and I trust it enough to leave in my system.

Conclusion:
The bgears b-Tarantula power supply is a very good choice if you’re in the market for a modular PSU, it’s not only stable but quiet as well.

The unique modular style of the b-Tarantula is very useful if you’ve got a cramped case or even a tight small form factor case, you can just bend the cables to connect them, and of course since it’s modular you only use what you need and won’t have extra cable floating around your case.