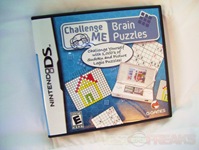 Puzzle games are one of those surprising genres that have seen mainstream success. There are dozens of great titles out there that challenge your brain, get you thinking, and digitally upgrade age-old puzzles that people used to do in activity books or on the back of the Sunday paper. The genre has pulled in one of the widest audiences of any genre, as puzzles appeal to young and old, gamers and recreational players alike. Nearly anyone can appreciate the challenges posed by the intrinsic complexity of a puzzle. Thus, a good number of game companies have tried their hand at creating a successful puzzle title to add to their lineups. Like any bandwagon titles, some are cheap copycats and some attempt to improve on the titles that stimulated the bandwagon in the first place.

Oxygen Games recently released Challenge Me: Brain Puzzles, another brain game made for the Nintendo DS. The DS is certainly the leading console for puzzle games, as its physical design and platform make it a great candidate for the structure and light-natured game play that comes along with the puzzle genre. While Challenge Me: Brain Puzzles isn’t the most successful puzzle title available and isn’t going to blow anyone’s mind with its take on the genre, it will suit some audiences.

Looking at the box, you can get a feel for what Brain Puzzles includes. The title implies it’s another Brain Age clone with tons of fun puzzles and things to do. In reality, it can barely use the plural word “puzzles,” as there are only two to be found. However, unlike some DS puzzle games that attempt to test your brain using hackneyed, lame puzzles, Brain Puzzles uses two more popular games: Sudoku and Picture Logic. Sudoku is a classic among puzzle enthusiasts and Picture Logic is similar to Picross, a less popular but still fairly well-known game. Therefore, those who are fans of the two will find some good here.

The game does make a few claims on the back of the packaging. It says it may help to reduce anxiety, improve logical thinking and brain reactions, and improve creativity. We’ll see. 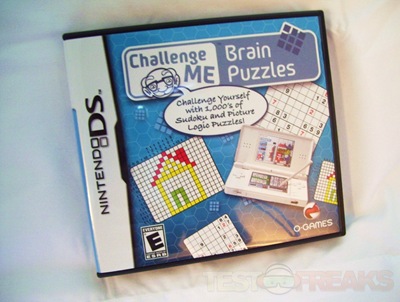 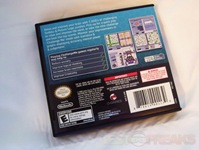 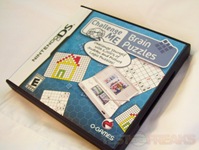 See how you improve in the ‘Challenge Me’ mode with statistics & graphics displaying accuracy, mental power and judgment!

Play against the clock in a series of challenges and try to beat the top scores. 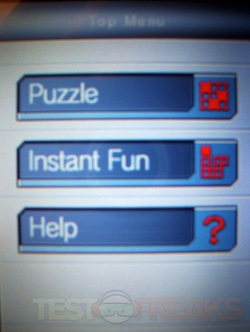 As soon as you boot up the game, you may become instantly annoyed. I did. The reason was because the game automatically turned vertical, forcing me to play the game with a side-by-side view as opposed to a top-bottom view. Some people may like this, and other puzzle games have also relied on this view, but I am not a fan of the layout. Looking through the settings to see if there is a way to change it to a top-bottom format was a fruitless battle, as no such setting was ever located. The thing that bothered me most about this presentation is that the box art shows the game being played as a top-bottom… yet you can’t actually do so. I’m not sure what that’s all about.

The music is cheesy, but personally that didn’t matter to me. It’s a puzzle game, and chances are you are going to turn the sound off anyway. There is a setting to eliminate the background music but keep the sound effects – one of the only settings you are given.

The graphics are primitive. You may expect that from a puzzle game, but some games are primitive without being overly bland. Brain Puzzles is very drab, and even though you can select a few alternate color schemes, all of them are pretty lackluster. Personally I find the alternate colors to be even uglier than the plain white/gray default scheme. Nothing about this game is fancy, that’s for sure.

The game has two save modes: Puzzle and Instant Fun. They are exactly the same, except one calculates your scores and gives you a report, and the other doesn’t save any data. There is also a help menu, but you won’t find any help there. We’ll get to that in a minute.

Clicking on Puzzle has you create a player profile. All you do here is enter your name, whether you hold the stylus with your left or right hand (left-handed people flip the DS the other way) and choose a background color. Again, that’s the extent of your options. 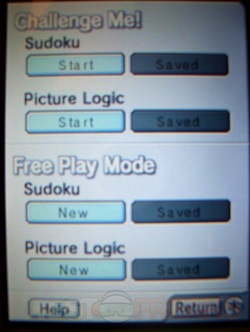 When you’re ready to play, you choose Challenge Me! Or Free Play. Challenge Me! Is the mode that, as the game claims, will help perfect your technique. The results of the puzzle are analyzed and given a ranking. 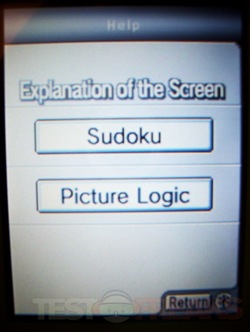 Again, Sudoku isn’t a new thing to most puzzle enthusiasts. But, if you don’t know how to play, this game isn’t going to help you. There is a “Help” section for each game, but it doesn’t actually tell you how to play. For both games, the help section tells you what you need to do as an end result, but gives you no instruction on how to go about getting to said result. It’s like handing someone a hammer and nails, then telling them to build a shed.

Taking a look at each game individually, we can see where the strengths and weaknesses lie. 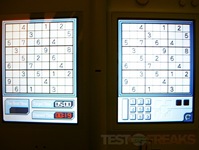 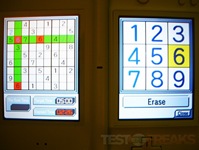 The Sudoku half of this game is pretty fun. There are 500 puzzles to complete and naturally, the higher you go, the harder they get. On the one side of your screen is the input area. You touch a square, the number pad comes up, and you choose which number you want to set. Any conflicts with your choice will be illuminated on the other screen, which shows your overall progress and alerts you to what might be bad number positioning. There is also a number pad on the touchscreen side. Clicking a number will show you every location of that number on your sudoku board, which is a very helpful means of seeing where you’ve placed things. Overall, the design of this input method is pretty simple and works well, making this an enjoyable sudoku game.

One thing that might bother people is the clock. This is part of the game’s Brain Challenging calculation business. Those who want to play a relaxing game of sudoku may be pressured by the clock, because the target times are really short. They start out at 5 minutes, which absolutely isn’t enough for anyone less than a relative sudoku master. But, you can treat this as you may… if you don’t care about monitoring yourself, just ignore the timer. If you do care, regardless of whether or not you beat the clock, you can see if your time is improving overall thanks to it keeping track for you.

The tracking isn’t very inventive and doesn’t really give you a lot of info. Considering that’s another marketing point of the game, it’s a bummer that it’s more or less useless.

So yeah, sudoku is pretty good. Then there’s Picture Logic… 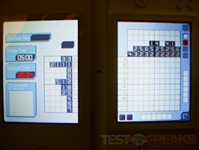 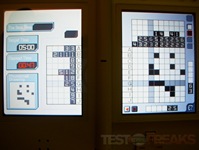 If you go into this game and don’t immediately say “What the hell…?” you ought to get an A in Brain Puzzles. It is entirely unclear what to do for anyone unfamiliar with Picross or this type of puzzle game, and as stated before, the help section will give you absolutely no instruction on what to do. Here is what you are told:

“This game is a logical numbers game. You must match up the numbers according to their colour and their length. When all of the numbers match up correctly in the grid they make a picture.”

Now, look at the screen shots and tell me what that means. You probably can’t.

Truth is, I still haven’t really figured out how to play this game after a few hours of trying. I’ve even handed the DS off to a few buddies and asked them to crack the code, but since none of them are a Navajo wind talker, they were also left dumbfounded. Checking other reviews of the title online, many people have the same feelings towards this game. If they ever figured it out, they admit it would have been handy to have some sort of instruction. Unlike sudoku, most people aren’t as familiar with puzzle logic or picross. It’s a total turn-off to newbies, and considering it is one half of Brain Puzzles, that’s sort of a big deal.

Here’s what I do know: The goal is to form an image on the right side of your DS using the numbers above and to the side. It’s a process of elimination. Say the first column on the left says 3 and 3, both on black squares. That means on the right side, there are two sections of three black squares that you need to draw. At first, all the puzzles are black and white, but eventually get colorized. In those instances, the left side might say red 3, blue 1. Then you’d know there are two lines to draw on the right, and one is made of three red blocks and one is made of a single blue block. Then, you correspond those instructions with the numbers along the top on the right to figure out where in the line they need placed. That’s probably a very complicated paragraph, and perhaps that’s why the makers of the game didn’t bother to write an explanation. They didn’t know how. I had to play for hours and scour the internet just to get that much understanding. Unfortunately, I now somewhat grasp the concept, but still can’t really gauge how to approach the game and actually draw something.

For me, this makes Picture Logic a failure. Hours of frustration certainly doesn’t reduce anxiety as the box indicates the game should. I find myself clicking the “Give Up” button on Picture Logic.

There are 500 Picture Logic puzzles to add to the 500 sudoku puzzles, giving you 1,000 total puzzles to complete in this game. The box says you can “Challenge Yourself with 1,000’s of Sudoku and Picture Logic Puzzles,” which technically isn’t true, as there are a flat 1,000 puzzles. Still, it’s enough for any fan of the games to keep them busy for quite a while.

At first glance, the title is misleading. You’d think you are getting more puzzles and more of a game. But, if you take a second to read the game’s packaging, Challenge Me: Brain Puzzles does what it says it will do: provide you with a whole mess of sudoku and picture logic puzzles. However, this game ultimately pales in comparison to most other puzzle titles. If it weren’t for the price, it wouldn’t be worth buying for anyone. Retailing for a meager $20, it clearly relies on value to appeal to consumers. Few comparable games are offered for such a low price.

The game does offer a great sudoku platform, and picture logic works once you figure out what to do. If you’ve never played either game before, expect to learn them elsewhere before delving into this title, or else find yourself desperately lost.

With only two games inside, bad instruction, lame sound and weak rudimentary graphics, Challenge Me: Brain Puzzles will appeal only to hardcore fans of the games within. For them, this $20 game is a dream come true. For everyone else, stay away. 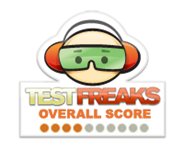