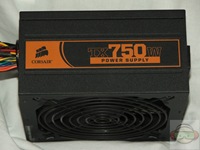 Corsair is very much known for it’s excellent performing memory,  but they’re recently moved into the power supply business and all over the place they’ve gotten rave reviews and praise about them, so apparently they’re very good.

Today I’ve got the Corsair TX750 750Watt Power supply for review and it features plenty of connections and power for most systems. the cables are sleeved nicely and I have to note that they are nice and long as well, it also features 80% efficiency and 99% Active PFC to round it out.

So read on to learn more

As usual we’ve got the unboxing up first: 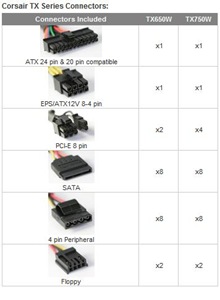 I had no problem installing the TX750W in my case as it’s about standard sized and the case I used had quite a bit of room for a power supply, the Ultra M998. 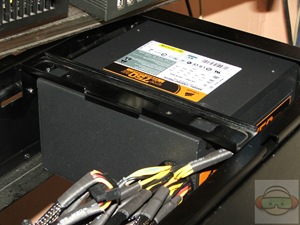 I did move everything over later on, and currently I’ve got everything in my Antec P182, the main reason I mention this is because the P182 is type of case that you mount the PSU on the bottom and my motherboard, an EVGA NF680i SLI, has the 12v connection on the top left corner, some power supplies have cables that are not long enough to reach through the back. The Corsair TX750W reached fine, I easily ran the 12v power connector and other on the back side of the motherboard with no problems at all.

One thing very nice about the Corsair TX750W is that it comes with four PCIE connections, my system needs three, two for the 4870 and one for the X1800GTO, most power supplies these days only come with two PCIE connections.

So for testing I got out my trusty multimeter to test the 12, 3.3 and 5 volt rails, while this isn’t the optimal way to do things it does give us an idea of how well it works. I also had the PSU installed in my main system for over three weeks, and it got a nice workout I’m sure. I ran Orthos Stress Prime and 3dMark06 to get load on the system and checked the rails, I did this several times over the course of the three weeks and averaged out the results.

LOAD:
3.3v = 3.37v
5v = 5.14v
12v = 12.09v
As expected the rails dropped a bit under load, but not much at all, and the 12v rails stayed there with no fluctuations under load. All three rails are well within tolerances as well.
I should also note that the TX750W seems virtually silent, at least I didn’t hear it at all over the rest of the system, it added no additional noise, no matter how long I used it or how much load was placed on the system.

Conclusion:
As expected the Corsair TX750W performs very well under load, and is very stable, it’s an all around great PSU really.

The extra long cables are great for large cases and to even help route them to keep them out of the way, the fan is silent as well which is something most anyone can appreciate.