Appy Entertainment Inc., is the new kid on the block providing fun, enjoyable applications and gaming software with humor, excitement and perhaps even a bit of scandalous entertainment for the handheld Apple platform. The company was start October 31st 2008 with one thing in mind, to create innovative and highly entertaining iPhone & iPod software. Today we are going to check out Appy’s latest creation, FaceFighter. With FaceFigther, you can fight anyone, anywhere, at any time without being formally arrested and charged with assault and battery. 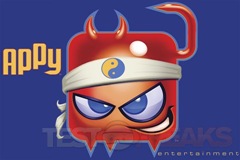 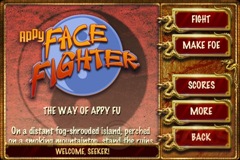 Import photographs of ex-girlfriends, brothers, sisters, school bullies, parents, bosses or anyone you like or dislike and kick their butts with Kung Fu like maneuvers and get the justice you deserve, the Appy way! The comical game provides huge laughs and good revenge, while you beat the crap out of any opponent you create. Imagine the controversy and fun in kicking the teeth out of your school teacher who just flunked your test scores or cheating spouse who just ran off with your best friend.

Okay, that sounds like trouble, but with FaceFighter your troubles are over. No need to be sent to detention or jail for blackening the eye of your foe, or kicking in their teeth with a Bruce Lee style kick to the face. Never be frustrated fantasizing about it, just do it with FaceFighter and create laughs and some friends along the way.

Specifications:
FaceFighter
If it has a face, you can fight it … friends, pets, even cartoon characters can be your boxing opponents. Give your foe black eyes, a busted nose, and swollen lips, and laugh at their expressions and reactions as you beat the crap out of them. But be careful — your FaceFighter opponent is a cagey boxer who will be trying to do the same thing to YOU!
Designed by the creator of the legendary Ready-2-Rumble Boxing franchise, FaceFighter is so simple that anyone can pick it up and play, but deep enough to reward skillful tactics as you learn to unleash devastating combos. With FaceFighter, easy button controls let you pummel your opponent with fists and feet like a Kung Fu Master, or kick butt with a crazy weapon like a monkey wrench.
Be a master martial artist like Bruce Lee. Work out your frustrations by beating up your boss, a spoiled entertainer, or a smug public figure. Experience action and adventure when you enter the ring to assassinate your foes. Make your friends laugh by snapping their pictures and showing them off as FaceFighter opponents. From Appy Entertainment — FaceFighter is fast, frantic fun everyone!

FaceFighter is a rather light applications coming in at 10.8MB in size. This is not bad considering the application has terrific graphics and photo editor on-board that morphs your pictures into an opponent you can beat the heck out of, including great sounds and user interface. On initial load up you will get to fight a character called “Big Ben” or create your own. I started with Big Ben to get an idea of what I am dealing with. You can choose up to four levels of game play. Appy Slappy, Easy, Medium, and Hard. I chose the Easy setting and proceeded to duke it out. On the card tonight is technogog vs. Big Ben. 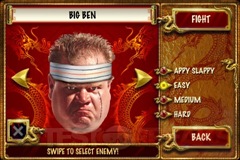 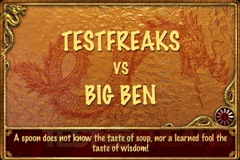 After you load your character, press the “Fight” button for a no holds barred cyber fight, Kung Fu style. Big Ben wasted no time trying to put the smack down on technogog. Four button’s (Two on each side of the screen), provide punches, kicks and blocks and you will need to use all four to whack your opponent into submission. 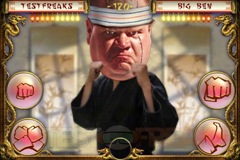 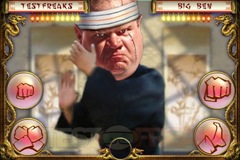 Taking on Big Ben, I decided to throw some kicks and connected with a foot face plant and immediately laughed after watching Big Ben take my foot in the face, leaving behind a black and blue mug. Poor Ben got his grill colorized. 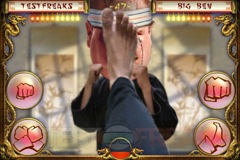 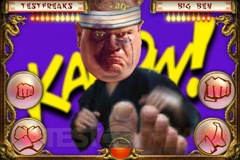 Now the fight is full on, punches and kicks flying around like two warriors fighting to the death. Big Ben was far from finished, after he ate my foot, he countered with some blows and kicks and was holding his own. Too bad for him, I connect with a combo and took his teeth out. 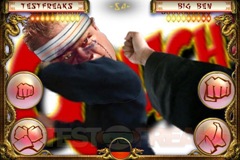 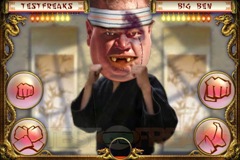 Big Ben, with his teeth kicked out, turned up the heat and came back with feet and fist’s flying. He wasn’t going down easily. He jacked me up pretty good with a kick and punch and started gaining the upper hand. 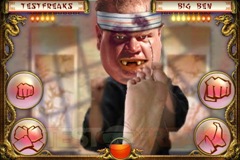 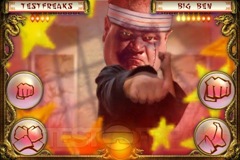 Actually, laughing at the game (LMAO) I was getting my butt stomped and Big Ben landed a few good hits for a KO against technogog. Not that the game is that hard on an easy setting, it was so funny to watch the action I just couldn’t hang with the tough guy! 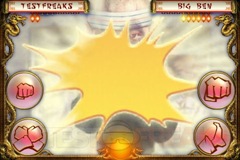 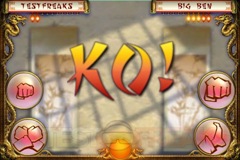 Now that I got schooled in Kung Fu by Big Ben, let’s take a look at how easy it is to import a picture and fight anyone you want to. To import a foe into your game click “Make Foe” this will pull up the picture editor. You can import pictures from your camera roll instantly or use your library to import the desired photo. Pinch or stretch screen to scale and or rotate the picture to match the eyes and mouth outline and that’s it! Now you’re ready to fight anyone! 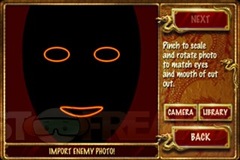 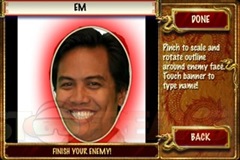 Conclusion:
Appy Entertainment, Inc., has created a really kick ass fight simulation that combines cartoon splash screens with hi-res action figures for a unique and unusually funny experience. The game is fun to play and will keep you laughing as long as you decide play it. People around you will actually wonder why you are having so much fun with your iPhone to the point they move in closer to get a look at the action.

The user interface is very easy to figure out, the sounds and graphics are great. The entertainment value is excellent and overall value of cost of ownership is outstanding. At $0.99 at Apple iTunes, this is a steal for such good clean fun, okay maybe not so clean but definitely fun! I happened to import a photo of my wife and she wasn’t so amused with my kicking and bashing her face into a pulp, but boy was it fun for me! (LOL) Like a good sport, she asked to import my picture, now I know how she feels. Now she enjoys giving me a pummeling without ever laying a hand on me. It was funny and gratifying at the same time.

FaceFighter is an oddly strange and funny application. Appy Entertainment pulls off a super fun game with exciting game play with exceptional value! Well done Appy! Over-all this application kicks butt and I recommend anyone to download this. 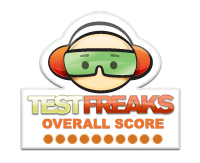