I’ve always been a fan of racing games, not a fanatic but someone who like them on occasion, they’re a great way to escape and well drive a car the way you can’t on the real road. Racing games also allow us the thrill of driving something that most likely we’ll never own, limited edition cars, classic cars, and of course super expensive ones. Most racing games out there are professional cars, but the Forza Motorsport series brings us real cars that you’ll see on the streets driving along side of your own. There are of course official racing cars as well that you can drive to help you live out your fantasies of being a race car driver, but that’s not what it’s all about. Forza Motorsport 3 offers a huge selection of cars and tracks, along with customization options like paint and decals along with all sort of upgrade options for the cars themselves.

Obligatory box shots for you here, and you’ll see that Forza Motorsport 3 is a two disc game, one of the game and the second disc is content. 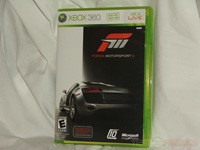 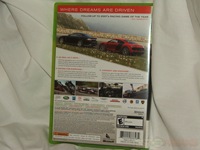 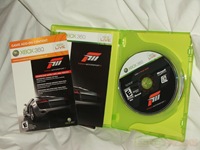 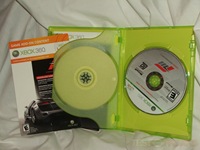 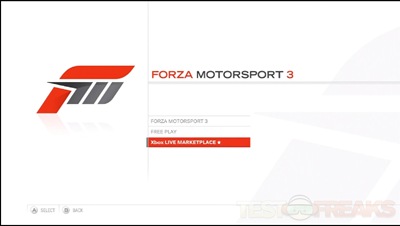 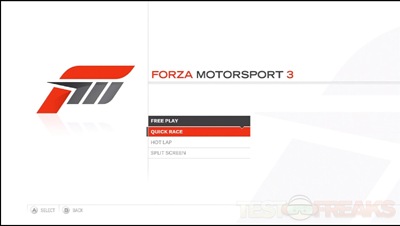 There are more than 400 cars and over 100 different tracks in Forza Motorsport 3, it will take you a long time to get bored with this game. 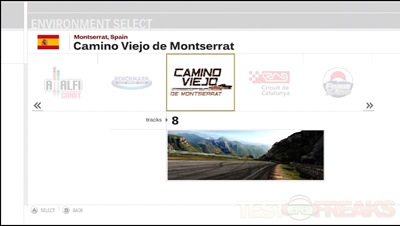 As far as cars are concerned this is one of the best aspects of the game. You can choose by manufacturer and then you’ll be shown all of the cars available, depending which one you pick you might get a couple cars or you might get quite a few. 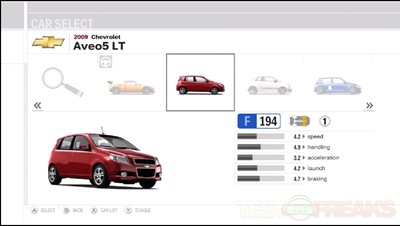 When you select each car you’ll get an animated close up 360 degree view of the car that’s very detailed, I spent quite a bit of time just checking out the cars. Some of the cars allow you to select the color as well and it will change for you immediately. 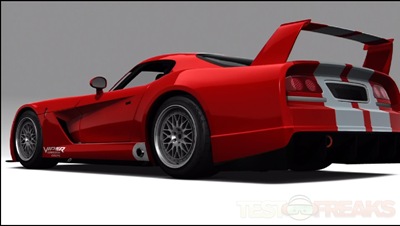 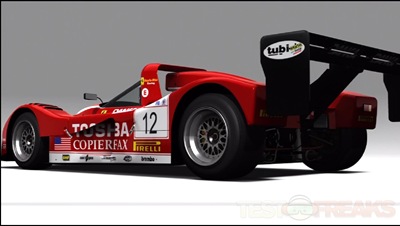 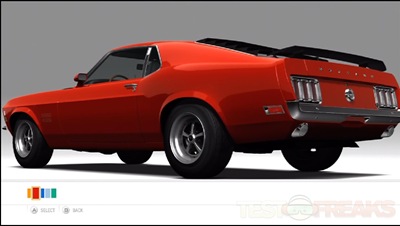 Here’s a quick video of the Doge Viper:

and here’s a quick video of the manufacturers, not all of them but you’ll get the idea.

Live the most realistic racing experience ever as you take the wheel of more than 400 of the most-beloved cars on over 100 renowned real-world tracks and exotic road courses from around the globe. With breathtaking HD graphics and the most advanced vehicle performance modeling in a video game, “Forza Motorsport 3” includes a host of driving assists and adjustable skill levels to make the game a gripping pick-up-and-play experience for audiences of all ages and skill levels.

A love of cars lives in all of us. “Forza Motorsport 3” is the automotive playground we’ve all been waiting for.

Featuring the latest and greatest production offerings as well as the world’s fastest and most exotic street cars, “Forza Motorsport 3” offers more than 400 fully customizable and tunable cars from over 50 of the world’s leading manufacturers. Whether your passion is classic American muscle cars, European roadsters, purpose-built race cars or high-tech Asian imports, “Forza Motorsport 3” puts you in the cockpit of the cars you love. In addition to the return of world-famous tracks from previous “Forza Motorsport” games, including Suzuka, Nürburgring Nordschleife and the Sebring International Raceway, “Forza Motorsport 3” invites you to conquer the corners on more than 100 tracks, including some of the most beautiful road courses in the world. New environments like the gorgeous mountainous Montserrat region in Spain, the rugged Amalfi Coast in Italy and the American Southwest are presented in such majestic detail that you might find yourself pulling over just to take it all in.

“Forza Motorsport’s” appreciation of the automobile is due in large part to the team’s attention to detail. This is why automotive engineers from manufacturers like Audi and champion race teams like Peugeot as well as experienced computer graphics specialists from across Microsoft have all teamed up with Turn 10 to make “Forza Motorsport 3” the most beautiful and realistic racing game ever made. All 400-plus cars in the game have been built with more than 10 times the amount of polygons as “Forza Motorsport 2.” This includes painstakingly researched cockpits and interiors for every vehicle. But realism isn’t just about pretty graphics. Turn 10 takes realism to new heights, leading the industry with the most advanced physics model, artificial intelligence and damage calculations.

Forza is for Everyone

Painters and tuners will once again be able to showcase creativity through the celebrated Livery Editor, Auction House and deep tuning garage in “Forza Motorsport 3.” The car is literally the artistic canvas as some of the world’s most creative car painters and designers find new layers of depth and freedom to create shocking visual masterpieces before sharing them with others over Xbox LIVE*. Each car in “Forza Motorsport 3” is fully upgradable, allowing gear heads to take on the challenge of turning a Honda Civic into a supercar killer. New Xbox LIVE scoreboards celebrate not only the greatest racers but also the most prolific car tuners and painters in the community.

“Forza Motorsport 3” is an epic racing game featuring more content and more ways to play than any racing title today. An innovative single-player season mode puts you through a completely personalized racing calendar that includes more than 200 different events, including Circuit, Oval, Drag, Drift and Timed Events. No two calendars are the same; they react to the cars you love and the races you enjoy most. In addition, the online multiplayer mode* gains an all-new game rules editor. This gives players a never-ending variety of ways to play with friends. Whether you’re a speedster, dragster, drifter, painter, tuner or just a lover of cars, “Forza Motorsport 3” is the definitive racing game for you.

When you play career mode the races are calendar based, and once you get farther into the game you’ll be able to select different cars for each race. Some races though are only for certain cars, like American muscle cars or front wheel drive only, and numerous other conditions for the races as well. 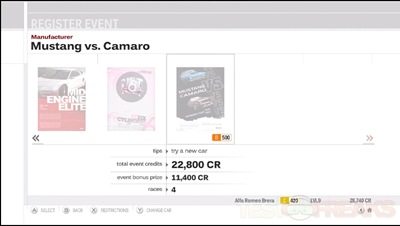 Depending on which race you’re competing in you can go to your garage and select a car, but the car you choose might not be compatible with the race requirement, you may have to upgrade or even downgrade your car to be able to compete in the race. 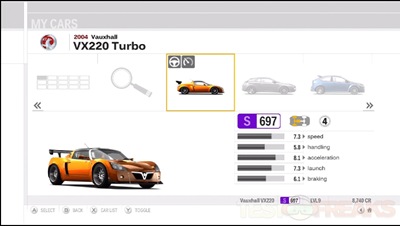 Once you choose the race and car you want you can just jump right in or you can tune your car a bit. You’ll be given another menu before the race begins. 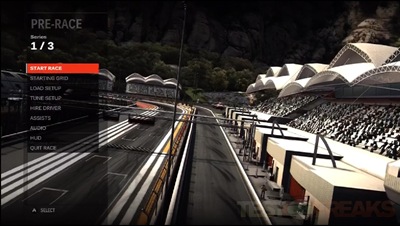 You can go into Tune Setup and adjust pretty much everything on your car like Suspension, Braking, Differential and much more: 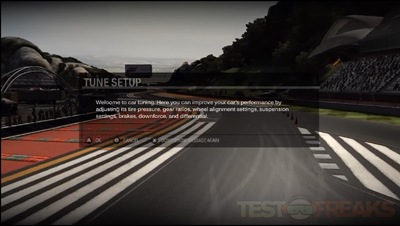 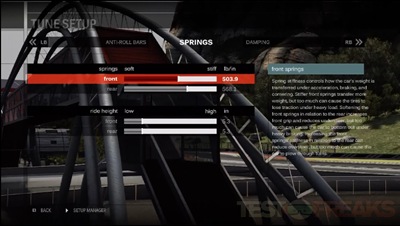 You can also adjust the assists and difficulty settings, changing these will offer you more bonuses as well. 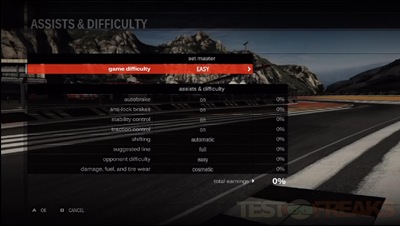 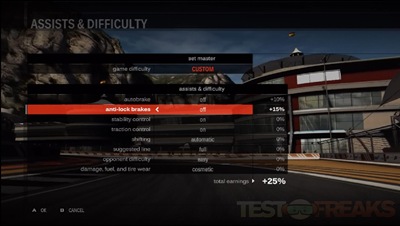 Before the race you’ll be greeted to a close up view of the your car then it’s off to race. 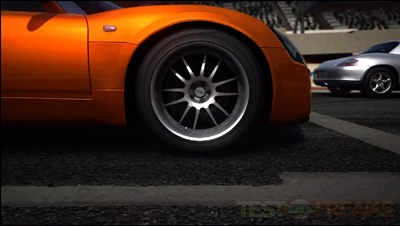 Racing is what you might expect driving around a track, on easy mode you’ll quickly learn that it’s very easy, you can place first pretty much every time just by being careful. There’s an assist mode that will actually brake the car for you when going into turns, and colored guide arrows on the road to follow. 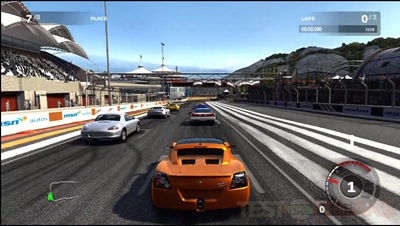 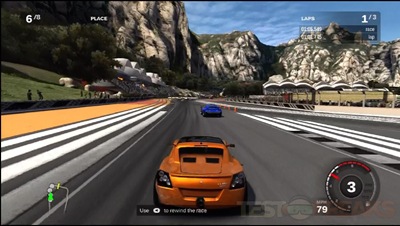 After the race you’ll get the Post Race report where you’ll see how much money and how much experience points you’ve earned. As you earn XP you can progress in levels and you can earn new cars from companies that like your driving. You’ll also earn small Xbox Achievements for each level as well. 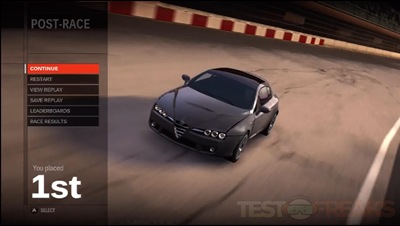 What would a racing game be without crashing right? Well I played around a bit to try and get my car to explode, but sadly it won’t, no matter how much damage or how fast I drove into another car it wouldn’t blow up. Your car will take damage that affects the performance that shows physically and on a damage meter off to the right side of the screen. I even went the wrong way on the track and drove head on into other cars to try and get something to happen, but only damage happened. 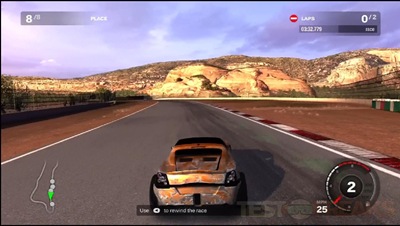 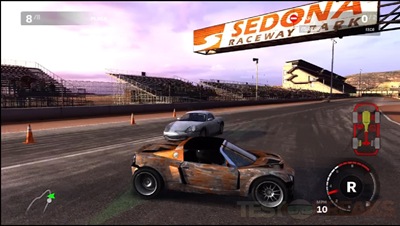 While you’re driving you can switch modes, the in-car or cockpit view is where you’re in the car. You’re also offered a behind the car view and a on the hood view as well. 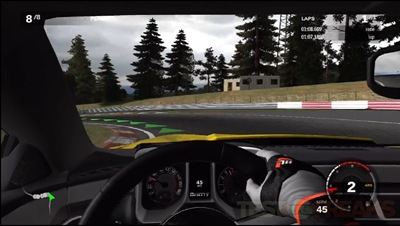 Here’s another video of actual racing:

Forza Motorsport 3 can be a very long game, in career mode you can spend many, many hours playing to complete your career and unlock all of the cars. In the end it’s worth it as you’ll be unlocking tracks and amazing cars to race with and against.

The graphics are excellent overall, depending where you race the scenery will change and you’ll find yourself just admiring it as it flies by you. Lighting is great, the cars sparkle in the sunlight and when you drive into the sun you’ll be blinded by it’s brightness.

As I said easy mode is fairly easy, if you want a challenge though you’ll turn off the assists to jack up the difficulty, though be warned it can and will make the cars much more difficult to handle and control on the track.

I really like the idea of driving real cars that I can afford, and not just driving my dream cars. It’s great to be able to pick from classic muscle cars, to antique roadsters up to full blown racing cars and just go at it. In the Free Play mode you can pick most any car, some are still locked, but not many, pretty much every car is open to drive, you can easily spend days in just Free Play mode.

I didn’t spend much time with the customization mode, it’s not my thing really, but you can design decals and paint your cars, upgrade them and then share them with others on Xbox Live.

Forza Motorsport 3 is a great way to get into the racing genre, it offers something for the beginner up to the hardcore racer. It offers racers a chance to jump right in and race or go full blown and invest a lot of time in career mode. It’s a game that even the casual racing fan will like, it’s got something for everyone really.

You’ll find more than enough cards and tracks to keep you very busy for many days and keep you coming back for more to try and unlock other cars and tracks.

Overall it’s an excellent game without many flaws, the cons really aren’t cons, just observations or things to be aware of.

Pros:
+Tons of options to customize and configure cars
+A lot of cars and tracks to choose from
+Community driven creation
+Excellent graphics
+Long career mode

Cons:
-Very easy on easy
-Can’t blow up cars…
-A lot of work to unlock cars