I’ve got another kids game today for review, this one is Marvel Super Hero Squad. If you’re an adult, you’ll find this game rather boring as it’s extremely repetitive, but if you’re a young child then you’ll love it, or if you’ve got kids who are fans of the TV series then this game will make them very happy. Marvel Super Hero Squad is available on a few platforms but I’ve got it for review for the Nintendo Wii, meaning that you’ll do more than button mashing, you’ll be using the motion features of the Wii to help you play the game. The graphics are actually decent, the heroes and villains are shrunk down, exaggerated versions of their full sized adult counterparts, if you’ve seen the TV series then you’ll be familiar with them I’m sure.

We’ll start off with box shots: 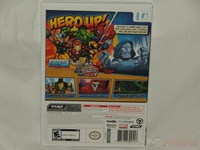 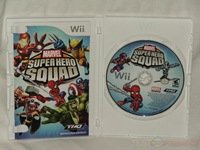 Then onto the game, here’s the intro video for you, a sort of music video if you will:

Once you’re passed the video you’ll get the title screen and then main menu. The main menu only has four options, two are the main game play modes, Adventure or story mode and Battle or the multiplayer mode. 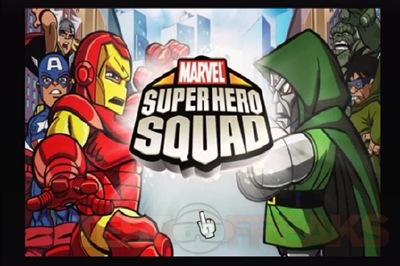 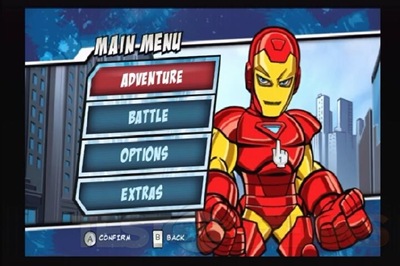 Under options you’ve got Audio, Controls, Codes and Cheats: 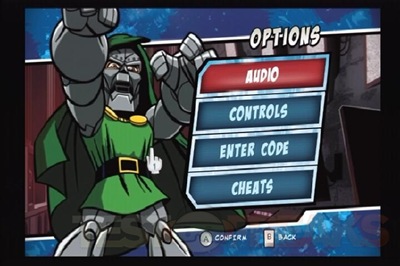 Under Extras you’ll find the things you’ve unlocked like Characters, Arenas and Movies: 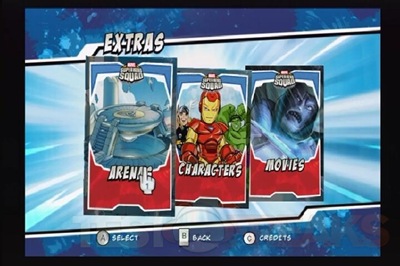 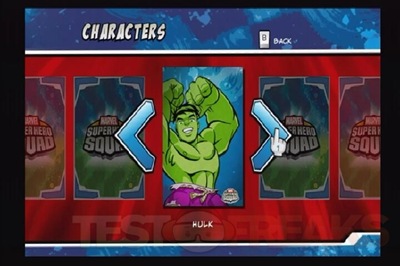 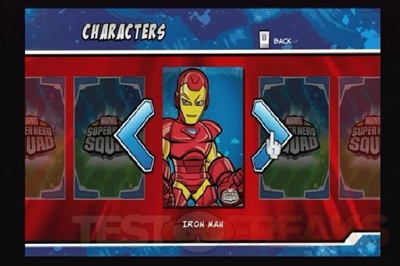 Welcome to Super Hero City! Assemble your squad and fight your way to victory to save the citizens of Super Hero City from the evil schemes of the super villains in this multi-player adventure game inspired by the action-packed animated Marvel TV series.

Fight through campaigns full of adventure or wage an all-out battle in the streets of dynamic environments as you mix and match heroes and villains with their own unique powers and abilities.

Hero up! Pick your battle–fight for good, fight for evil or just fight for fun!

In Battle Mode:
* Go head-to-head with your friends and fight as your favorite Super Hero or Villain.
* Choose from over 20 Marvel characters from the X-Men, Fantastic Four, and Avengers series and use their unique super powers to smash, bash, and zap your enemies.
* Create your own combo attacks to takedown the competition with unique character powers.
* Choose a dynamic battle arena and trigger environmental events as you fight.
* Fight the fun fight with up to 4 players: all-in, 2-on-2, or 3-on-1.

When you start in Adventure Modes you’ll be playing one main character then you’ll get to pick your partner from those available. 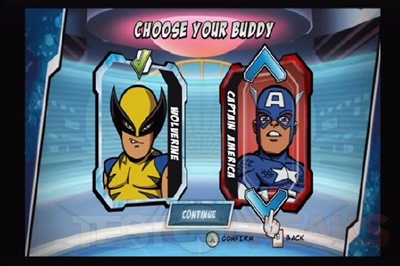 Then it’s off to complete some quest or mission that usually involves several levels. Most of the game will be spent fighting in an area, basic button mashing stuff here. 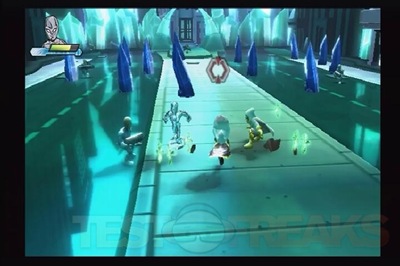 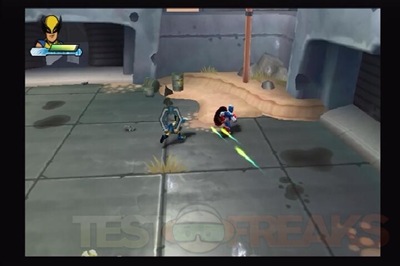 They do mix things up a bit and throw in areas where you’ll have to jump from platform to platform to get somewhere. 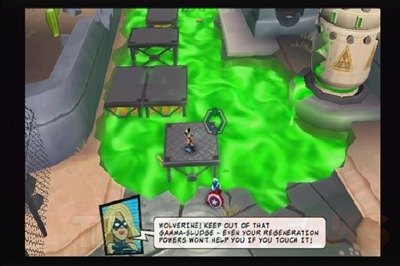 and there are certain sections, more like interactive cinematics that you’ll need to move the Wii remote in a certain way and hit buttons to complete.

At the end of a lot of the levels you’ll have to defeat a boss, this is done by knocking him out ten times in total.  This is done in an arena style area with limited area to move in. 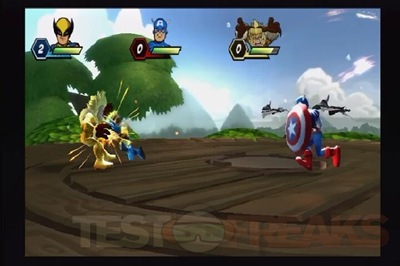 You’ll find a lot of cut scenes in Marvel Super Heroes that help tell the story, they can be funny, but they can be rather long too.. 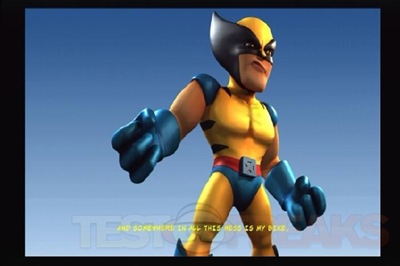 Most the game will be just button mashing, that’s all there is too it really, and it very repetitive. This isn’t a bad thing for children though, repetition is easy for them, and they’ll quickly figure out what to do and learn the game. Adults though will quickly become bored with all of the repetition, I found myself just playing the game to finish it so I could write the review, pretty much bored overall. My kids though don’t seem to mind at all, they had lots of fun playing Marvel Super Hero Squad. There are special moves you can do with the Wii remote and Nunchuk, but you don’t have to do them at all, you can just keep hitting to get through most anything.

The AI in the game is really dumb, at times they’ll just stand there and let you beat on them, but this is a kids game so it’s not meant to be very hard or challenging. There is an Easy mode that’s on by default, you’ll have to uncheck the box to not play on easy, every level you’ll have to uncheck the box. Easy mode is very easy, and the not easy mode is easy as well.

One of the biggest problems with Marvel Super Hero Squad is the camera, it’s just all kinds of messed up. The camera is not intuitive and it will just go wherever it wants it seems, sometimes obscuring your view. This isn’t too bad in the single player mode but it is in the multiplayer mode.

The voice acting is pretty bad as well, but most games are like that and I don’t know many children that will even pay attention to the voice acting honestly. The voice acting works for what this game is, a kids game, my kids didn’t seem to mind the acting at all, they actually liked the cut scenes very much.

If you’re an adult looking for your Super Hero fix then this isn’t it really, it’s a game aimed at children, and that’s who should be playing it. It’s very easy to play, and everything is cute and funny and it’s very repetitive.

Being aimed at children it works, my kids like this game quite a bit, and have played it often, I’ve never once seem them really get bored with it. There are parts where younger children may have problems, like the sections where you’ve got to move the Wii remote at a certain time, but other than that most any child should have no problem with the game. Even my four year old could handle pushing buttons and beating up the bad guys.

The graphics in Marvel Super Hero Squad are actually quite good, the characters are goofy looking yes, but that’s the way they’re supposed to be.

I’ve said it before and I’ll say it again, you can’t review or rate a child’s game like you would an adults game. I’ve seen reviewers giving this game very low scores, but that’s because they’re thinking like adults and most likely don’t even have children in their household. I play these games yes, because I have to to complete the review, but I understand it’s a child’s game and I also let my children play them, I observe them playing and I even ask questions about the game to get their opinions and views to incorporate into the review and the overall rating. You cannot rate a children’s game the way you would an adults game especially without letting a child play it…

here’s a couple game play videos for you to finish this off:

Marvel Super Hero Squad is a great children’s game, it’s easy to play, it’s funny and fun, and if your kids are fans of the TV series then I think they’ll enjoy this game very much. For children this is a great super hero type game that they’ll be able to pick up and play easily with little or no help from an adult. Part of the things that make this game bad for adults like repetition and easiness make it that much more enjoyable and accessible to children.

If you’re an adult looking for a new Super Hero type game, then you don’t want this one, it’s not for adults at all, it’s too easy making it rather boring.