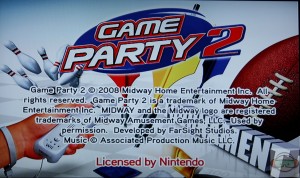 Out of all the next gen console systems, the Wii has the most mini-game collection/party game titles. These games are composed of multiple games that can be played independently and usually take under ten minutes to complete. Some mini-game/party game titles in the genre include Raving Rabbids 1&2, Wii Play, Wii Sports and the original Game Party.

The Wiimote’s unique user interface offers exciting ways to interact with games. Sadly, Midway does not properly utilize this capability in the control interface. In fact, the mini games are all controlled by one of four Wiimote gestures. Now this could be forgiven if the games were exciting to play, but in fact, they are repetitive especially after one or two game sessions. Unlike games such as Raving Rabbids, Game Party 2 does not provide any humor or interesting background for additional entertainment during game play.

The game can be played solo or with multiple players. One nice feature is that players can take turns or you can play simultaneously with four players in split screen mode. The main menu lets the player scroll through the various mini-games. Once a game is selected and the number of players is chosen, the player then chooses a game character. The Character Select screen lets the player choose from the various characters, create characters of use a stored profile.

Using a profile, allows the player to win tickets as you play through the various games. The more tickets you get the more items you will be able to unlock in the games or in the character creation mode.

The character creation mode is also just as limited as the game play. Creation options are spares as there is very little variability to create unique characters.

The games are pretty much broken down into these groups – Bean Bags, Lawn Darts, Horseshoes, and Skillball involve an underhand controller gesture; while Quarterback Challenge, Hoop Shoot, and Ping Cup involve an over the head motion. Puck Bowling and Shuffleboard are played via a pushing movement, while darts is a forward pointing motion. Finally Trivia involves using the Wiimote as a pointer.

Game Party 2’s games setting include basements that look to be from the early seventies with the requisite wood paneled walls, in backyards with charcoal barbeques or in a darkened sports bar. The characters look like more developed Miis with actual limbs. But they are pretty generic looking otherwise. Graphically the game appears like something from an earlier gen system. The musical score varies from generic rock to occasional jazz.

With 11 games in all, Game Party 2 for the Wii console includes fun to play games that will provide hours of enjoyment with friends and family. Game Party 2 features new games like Bean Bags, Horseshoes, Lawn Darts, Puck Bowling and more. Each game, including classics like Skill Ball, Darts and Hoop Shoot has exciting new features like four player mode, customizable characters and tournament play, making Game Party 2 the ultimate party game for all ages and skill levels.

* Four-player action available for all games: Never play alone again! Get together with friends and family to see who can rank #1 in all 11 games. If the party gets too big, set up tournaments for up to sixteen players!

* Individual profiles: Players can now create a profile to track their progress and skill level as they play. Multiple players can create and use profiles, taking the game to a level playing field creating an enjoyable experience for everyone.

Tournaments enable up to sixteen players to participate in a variety of mini-game competitions. These can be single elimination or best out of three, five or seven rounds. Tournament game options are Best-Of series, Loser Goes Home, Winner Moves On or Head to Head. Split screens can allow up to four players to play at once.

Here is a quick break down of each mini-game:
Bean Bags – Toss bean bags onto a inclined wood board. Get the bag through the hole for double points.
Horseshoes – Toss the horseshoes onto a metal spike.
Lawn Darts – Involves throwing sharp darts and having them land into one of two rings.
Puck Bowling – Slide a hockey puck at pins.
Quarterback Challenge – Throw a football to the short distance receiver or the guy in the end zone, just don’t get picked off!
Trivia – Like the machines found at the local saloon without the smoky bar atmosphere.
Hoop Shoot – Arcade basketball
Ping Cup – Beer pong without the inebriation
Shuffleboard – is played on a table, not the kind they play in retirement communities
Skillball – Also known as Skeeball
Darts – Throw darts at a virtual dartboard.

Game Party 2 is easy to pick up and play right out of the box. If you have played Wii Sports, then navigating through this game is simple. Midway designed this game for the family and casual gamer in mind. Unfortunately, the most of the mini-games become monotonous after a couple of play sessions.

The collection of mini-games is also hit or miss. Some games such as darts and beanbags are fun to play. Other games such as lawn darts or ping cup can be frustrating and tedious. To make the mini-games have more replay value, there are different game modes of several of these games. One such example is darts baseball. Unfortunately the mechanics of the game stays the same, just the appearance is altered.

The gaming gestures are fairly repetitive and subtle changes in motion are not really recognized. This renders finesse maneuvers such as hooking or slicing almost impossible. Since this feature was implemented in Wii Sports, it can be done. Why Midway did not refine the controls is confusing to me.

Here’s a brief video of a few of the games being played:

Game Party 2 is a party game that should be better. The execution of most of the mini-games is underwhelming with the repetitive gestures used for several games taking most of the fun out of the experience. In comparison to other party games, Game Party 2 lacks originality or uniqueness to separate itself from the pack. For little kids this title offers some entertainment value, however most adults will grow tired of the repetitive nature of most of the mini-games.