There’s always been a trend where video game tie-ins to movies are just bad, sure there are some exceptions, but the norm is that the games are usually bad no matter how good the movie is. So what happens to a game when the movie is bad?  Taking a look over at Rotten Tomatoes we see that G.I. Joe Rise of Cobra garners a big 42% rating, that’s pretty bad. If we we were in school, that would be well below an ‘F’ or failing grade. Now I haven’t seen the movie, so I can’t personally weigh in on that, but I have played and finished the game, and it’s just as bad as the movie I’m sure, at least I think it deserves a similar rating…

Read on if you wish, or not…. This was a game that I did not enjoy playing, it was a chore really, just plain bad. Some games that are bad are at least enjoyable and a bit fun, but there really are no redeeming elements to this game at all.

I might be a bit biased as I grew up watching G.I. Joe on television and this game is nothing like the G.I. Joe that I remember. It’s just bad, plain and simple….

So we’ll just jump right in.

Here’s the first video of the menus for you, I’ve completed the game and unlocked quite a bit of it:

When you start playing you start with only two characters, Duke and Scarlett, as you progress you have to either rescue or find the file cards of the other characters and then you’ve got to buy them with points. The characters look nothing like I remember them..

I’ve got two gameplay videos for you as well, here’s the first one:

The characters sort of have unique weapons but you’ll find they’re repeated with some of them. They also have special attacks as well that cause more damage, these attacks need to charge, and you charge them by shooting enemies. You also have unlimited ammo, so you’ll never need to reload. You also have the use of the Accelerator suit which also takes time to build up, you might get to use it three times in a level and then it only lasts a few moments.

As COBRA unleashes its deadliest plot yet, the G.I. JOE TEAM is counting on YOU to lead the counterattack. Every mission is critical – and so is every G.I. JOE. Your hand-picked team of heroes must battle COBRA organization’s deadliest bosses as you snake your way through enemy territory.

G.I. JOE The Rise of Cobra picks up where the movie leaves off as the COBRA organization unfurls its deadliest plot to date.  Players must counter the COBRA team’s every move over the course of 20 levels spanning four different environments including the snowy arctic and balmy jungles.  As the high stakes battle begins to let loose, selecting the best-suited G.I. JOE characters and their accompanying gear and skillset becomes a pivotal strategic decision when facing the dark forces of COBRA such as STORM SHADOW, a soulless and powerful enemy.  It may be a job for DUKE, a well balanced combat soldier or perhaps the mission should be handed off to SNAKE EYES based on his lethal martial arts skills.  Better yet, co-op play lets players find the best combinations with any two characters for an over the top tag-team showdown.

When selecting a G.I. JOE team, players can handpick members from three units: Heavies, who can zero in and pick off specific targets from a distance; Commandos, who are Ninja-like and can eliminate the enemy at close range; and Combat Soldiers, who offer balanced skillsets at both distances.

Adding to the action, players are also challenged to find 75 file cards and various intelligence items that are buried deep within the game in order to unlock new characters, special missions, achievements and trophies. In addition, defeating each of the four COBRA bosses will earn the player the ability to unlock four of the classic 20-year old G.I. JOE Public Service Announcements (PSAs), other bonus content and the ability to play the game with the COBRA boss characters.

Wow… where to start..

The camera is just horrible, you’ll find yourself lost and you’ll have enemies shooting at you that you cannot see, and by the time you do find them they’ve done significant damage to you. As you’re walking or driving along the camera will just decide to move, at one moment you’re running away from the camera, then in an instant you’re running or driving towards it. It’s just horrible and of course there is no way to control it.

The vehicles are boring, they’re pretty much the same, just re-skinned to look different, and their controls are horrid.

The characters talk way to much, you can skip most of them but with some you’re stuck listening to pointless banter that is supposed to be witty.. at least I think it’s supposed to be. Repetition can be interesting at times, but here it’s not, it’s the same old stuff over and over again. You’ll find yourself blowing up generators to shut down a force field pretty much every level. The enemies are the same as well, there’s not much new fight after the first couple missions, and the bosses are boring as well, and they’re repeated several times. Might be nice if they threw something else in from time to time.

The graphics don’t look like they came from an Xbox360, more like stuff I saw on my Sega Genesis, there’s nothing really that jumps out at you and you think ‘wow that looks cool’. The scenery is also all just repeated over and over again, the snow and desert look the same except for the ground color really. If you colored the sand white it could be an arctic level, these guys seem like they just weren’t into doing anything different with the game and just re-hashed stuff over and over just with a different color.

The characters are horrible, the voices are horrible. From what I can recall of G.I. Joe Destro had a deep, almost menacing voice, here he sound like a homosexual Irishman ?! Now mind you I’ve got no problems with homosexuals or the Irish,  it’s just what he sounds like. Cobra Commander is just as bad, I didn’t like his voice in the series really, but I would have preferred it over the guy they’ve got doing his voice now. The voice acting is pretty bad as well, it’s like they’re just speaking the lines with no inflections in their voices. Even when they yell ‘Yo Joe’ they sound like they’re not really into it…

Controls are horrible, buttons are double and triple tasked meaning the Y button is for activating the accelerator suit, entering a vehicle or accessing a terminal. So I found several times that I activated my suit instead of entering the vehicle or accessing the computer terminal and wasting the built up use of the suit.

They took a cue from Gears of War using the cover system but it fails miserably as that button has two uses, one for rolling or dodging and then for entering cover. You’ll find yourself rolling when you wanted to be ducking and covering.

There are a couple good things, the achievements are easy, very easy in fact, and rather dumb. Play as two female characters and get 10 points, play as two commandos and get 10 points. One play through and you can easily get more than half of the available points. Playing though it also doesn’t take any time, maybe six hours total, and that’s trying to make sure you collect everything, if you just run and gun you’ll be through the game much quicker. 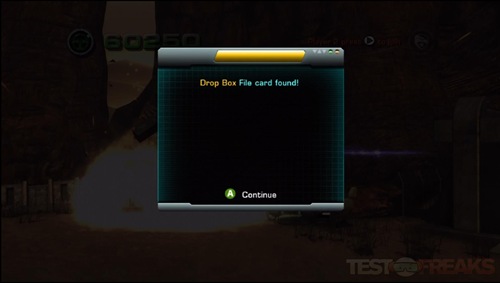 Speaking of collecting, there’s lot’s of unlockables, like Art, Movies and other information. Some are worth it, like watching the old PSAs, but you can find them on YouTube for free and not spend $50 for the game to see them. 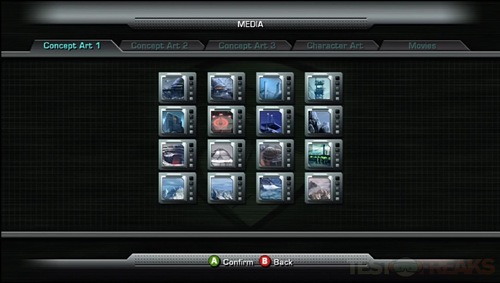 There are three level of difficulty, but that’s not what I would call them, they’re more like three levels of frustration. On the Casual level you’ll be revived if you die instantly, on Advanced you’ll be revived at Checkpoints, and then on Hardcore you won’t be revived at all. Even though the AI is rather dumb, you need him to finish the game. And what I mean by dumb is that many times your partner will just stand there doing nothing while you’re getting blown away by several enemies. 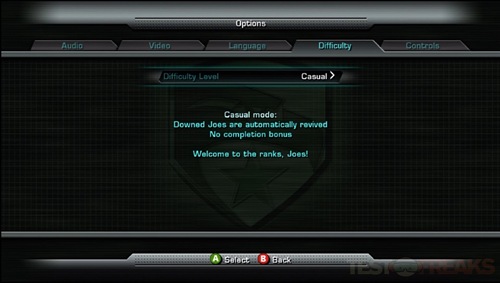 Speaking of Checkpoints they’re pointless… they’re just a place to revive your characer if possible and find out your score, they’re really just load points in the game. Speaking of load times, they’re atrocious as well, I couldn’t stand it and installed it on my hard drive and that didn’t change much at all, even on the HDD load times were still fairly long.

and I’ll leave you with another movie:

Conclusion:
To quote one of my favorite movies": Run Away, Run Away”

Seriously this game is not worth the cost, I don’t even think this game is worth buying if it was in the bargin bin.

G.I. Joe Rise of Cobra is one of the most horrible games I’ve ever played, it is not worth your money, do not buy it, ever. Electronic Arts should be ashamed that they even decided to publish this piece of trash.

Pretty much every aspect of the game is bad, from the graphics to the gameplay and even to the special bonuses.

If you’re a G.I. Joe fan, don’t subject yourself to this, keep the good memories you have of the old G.I. Joe and don’t ruin them. 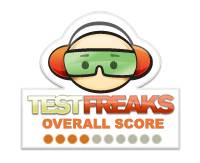