The rhythm band genre has become a major source of revenue in the music industry. With all the licensing fees and downloadable content, the music industry has a new economic paradigm to stimulate sales. Now instead of buying the latest album from Best Buy, you can download the same album for play on Guitar Hero. Knowing this, video game makers and record companies want these games on as many gaming platforms as possible. Not wanting to keep the portable gamer excluded from all the fun, Activision has created the DS version of their hit game – Guitar Hero. The original game was Guitar Hero: On Tour and the new version of the game is Guitar Hero On Tour: Decades. Today we will look at the latter version.

This version of the game substitutes the Guitar Hero Guitar Grip in place of the plastic guitar controller found in the console version. Using the guitar grip, the player can “fret” the notes while “strumming” on the screen with the pick/stylus. Game play is otherwise almost exactly like the big brother version of the game.

Guitar Hero On Tour: Decades is packaged in a yellow box with the game controller seen in a clear window on the top of the package. On the back, we find a list of features and a listing of some of the tracks from the set list. Opening the package, reveals the Guitar Hero DS game, the Guitar Grip, a pick stylus, two sets of stickers, a spare guitar grip skin, the instructions, quick start guide and an adapter for the original DS style game system.

The Guitar Grip controller is black with a clear plastic cover, that can be removed to replace the skin that sits on top of the controller. On the back side of the grip is a adjustable strap which can be adjusted with the Velcro closure. At the end opposite the playback buttons, we find a slot to store the pick stylus. 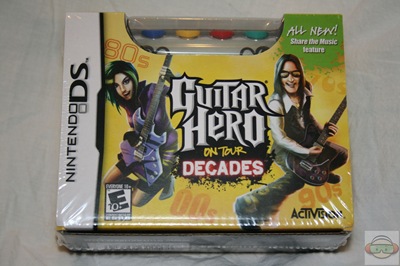 To get started, one needs to insert the Guitar Grip into the slot 2 position on the Nintendo DS. Then insert the game into the portable console, open the DS and power on the game.

From the main menu, the player can select single or multiplayer game modes. The single player options include either Quick Play or Career Mode. In Career Mode, the player can choose to play Lead Guitar, Rhythm Guitar/Bass or face off in a Guitar Duel. With Multiplayer, you can host a game and play four different games – Face-off, Pro Face-Off, Co-op, and Guitar Duel. Additionally in multiplayer players can share songs between DSes and between the original Guitar Hero: On Tour and the newer Decades version.

If you need help in learning the musical ropes, then Training mode provides a Tutorial or lets you Practice specific songs. For those lefties, Guitar Hero On Tour: Decades lets the user set the controls for lefty flip or just change the gem color order.

If you have played previous iterations of Guitar Hero, then game play from this point forward should seem very familiar. The controls Game on Guitar Hero On Tour: Decades are the same as on the console version, holding the fret button and strumming the screen will play basic notes, while holding the fret button will sustain the note. Chords are two or more notes fretted while strumming; to activate the whammy bar wiggle the pick stylus anywhere on the touch screen while a note is sustained.

Difficulty settings range from Easy, Medium, Hard and Expert. Easy uses which uses just three of the four Fret buttons, while Medium and up involve all four buttons with more chords and notes added as the difficulty level scales upward.

Once again, the meters are what gauge your performance; from the ever important Rock meter to the Star Power and Multiplier meters, the player must keep careful track of these to maximize their score. Keeping the Rock meter in the green is key for rocking out in Guitar Hero On Tour: Decades. When involved in a Guitar Duel, instead of the Star Power Meter, you will need to get Battle Power Ups to defeat your opponent.

Travel back through time and rock on with the latest portable guitar simulator. Guitar Hero On Tour : Decades features sets of five songs out of a total of twenty-eight tracks. Each set focuses on a specific era of rock music, including two called “2000” and “Modern”. Each set has a specialized venue for the era. Seven songs are taken from Guitar Hero World Tour.
Play co-operatively or compete head-to-head in local wireless play in Face-Off, Pro-Face Off, or Guitar Duels; blow into the microphone to extinguish a pyrotechnics effects gone wrong, or use the touch screen to autograph a fan’s shirt in the middle of your set Rock out anytime, anywhere -take the Guitar Hero experience wherever you go. The Guitar Hero Guitar Grip is an ergonomic extension that mimics a guitar fret board and fits seamlessly in your hands to deliver the same core gameplay that defines Guitar Hero Strum with the stylus – Included with the game is a Guitar Hero pick-stylus that allows you to strum away in style on the touch-activated screen of the DS

Shred to classic songs from the ’70s, ’80s, ’90s and today. Play in exclusive, brand new venues set through the course of history, inspired by the most important rock trends of the last 40 years

Mastering the tracks – Rock out to the biggest selection of music ever on DS, with all master tracks from the defining artists of their era including Fall Out Boy, Linkin Park, Red Hot Chili Peppers, Bon Jovi, REM, Queen and many more

Customizable characters – Rock out with outfits from throughout the ages, defining the best and most outrageous clothing trends in rock history

Choose your path – Play through any one of three different career paths each with their own story – Lead Guitar, Bass Guitar, and Guitar Duel

Guitar Hero On Tour: Decades is not a great game, it plays pretty much like the console version except there are a few caveats. The first is the Guitar Grip controller only has four buttons. This makes the game slightly less difficult in the respect that on the console versions, the plastic guitar features five buttons.

Second, the Guitar Grip is hard to manage with larger hands or even smaller hands. My six year old daughter had trouble getting her pinky comfortably around the controller to reach the fourth button, while I am on the tall side and my hand felt awkward on the controller. I felt like my fingers were overlapping buttons and if I was not careful, I would accidently knock the Guitar Grip out of the DS during gameplay. During several occasions, my hand would slip off the buttons and lose the proper orientation against the frets. Not to mention, that the Guitar Grip causes some wrist strain and cramping when held for prolonged periods.

Graphically, Guitar Hero On Tour: Decades looks decent, but is definitely lower resolution than any of the Guitar Hero console versions. The audio does rate better even if it is coming out of the tin-ny sounding Nintendo DS speakers. The songs are original recording sung by the artists that made them famous, which does add some more “realism” to gameplay.

Finally, one of the best things about the Guitar Hero series is the feeling that you are playing a guitar. I guess having a plastic guitar provides a psychological feeling of actually playing the music. The controls on the DS feel like you are scratching the screen while pressing buttons. That ruins the “realism” of Guitar Hero for me.

Barring these complaints, gameplay should feel very familiar with those who have played the larger scale version of Guitar Hero. The song list is much more condensed than the other Guitar Hero titles. Guitar Hero On Tour: Decades features tracks such as from classic artists such as Free, Lynard Skynard and Queen to newer artists such as Tokio Hotel, Paramore and Fall Out Boy. As the game title indicates, the songs are broken down in decades from the Modern era working backwards towards the 1970s. In my opinion, the track list for Guitar Hero On Tour: Decades may be the weakest one to date.

As you play through the Career mode, there are plenty of unlockable features along the way to make gameplay more enjoyable. It takes around three hours of straight game play to get through the career mode, obviously this also depends on the player’s skill and the difficulty level selected.

Guitar Hero On Tour: Decades has to live up to its namesake and unfortunately is crippled by the console it is played upon. It is not a bad game and if it was a different title, it may not be judged so harshly. The controller is hard to manage with larger hands and becomes uncomfortable after playing for a short time. In addition, there should be some way to lock the Guitar Grip into place on the DS.

There are no innovations to the Guitar Hero franchise with Guitar Hero On Tour: Decades. If you have played any Guitar Hero title before, then this one will seem way too familiar.