Videogames are the hot product this year, and well for the most part they really are every year. Each year, right before Christmas a bunch of new games are released in hopes of getting our money, but they all can’t be great games can they? No matter how hyped they are, no matter what the premise is, a lot of games that come out are just not that good. When it comes to games that are modeled after their movie counterpart, most of the time they’re not that good really,  why? Well because the developers are trying to just make more money with something that ties into the movie, and often times it shows that they just didn’t put any real effort into creating a decent game.

Today for review I’ve got the movie tie-in video game for the PS2, Madagascar 2 Escape 2 Africa. M2E2A is a platformer style game that is aimed at children obviously, but it’s got numerous mini-games included, along with a multiplayer mode as well and the ability to unlock more things by collecting coins while playing.

For children it’s a great game, but most adults or older kids will get bored very quickly with it as it can be repetitious at points, and the controls aren’t the best at all.


A lot of this review will be videos, I’ve got several of them I captured using my AutumnWave OnAir GT, and of course since it’s a PS2 game they’re not exactly high-resolution. So oh well on that I guess…

Here’s the box shots for you : 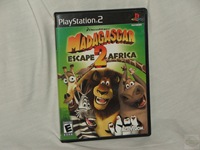 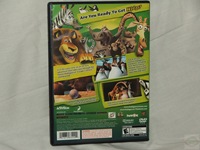 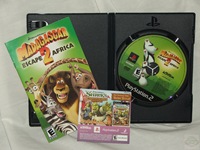 First movie here is mainly the introduction with a bit of initial gameplay involved:

Join Alex the lion, Marty the Zebra, Melman the Giraffe, Gloria the Hippo and their entire madcap Madagascar crew on a whole new action-packed journey to save the African savannah in the Madagascar: Escape 2 Africa™ video game.

PLAY AS ALL YOUR FAVORITE MADAGASCAR CHARACTERS PLUS NEW ONES

Your favorite characters from Madagascar return and you can play them all! In addition to Alex, Marty, Gloria, and Melman, you also get to play as the crafty penguins, the wacky King Julien and new hippo character Moto Moto!

Learn all the moves and choose which character is best for the situation at hand.

Experience the characters, settings and situations established in Dreamworks Animation’s new Madagascar movie. Unique new environments include the Watering Hole, a free roaming area that’s been expanded for the game, the volcano and the plane wreck.

MASTER NEW GAMEPLAY CHALLENGES AND TWICE AS MUCH MULTI-PLAYER

Master new and expanded tournament mini-games including twice as much multiplayer action as the first Madagascar!


The second movie is of the menu, it’s a big menu including all of the mini games and how the Duty Free Shop works where you can buy new items, and unlock more parts of the game, in addition to unlocking special mini movies by collecting coins while playing.

Madagascar 2 is a platformer but it’s primarily a bunch of mini-games strung together, while not a bad thing as it does offer quite a bit of variety, it can get frustrating for younger children at points. There are times when you just don’t know what to do next, and there really is no indication of what to do either.

I have a 6 and a 7 year old so I handed it over to them to play, and I watched them play to see if they could figure it out without any help from me. For the most part they did just fine, but as I already mentioned some of the games can be frustrating and fairly difficult for little children. Luckily a lot of the games can be replayed over and over until you beat it or complete the task. It’s a kids game and that’s all it is, and my kids very much enjoy playing it, they think it’s great fun, and I think that’s what counts. We have Madagascar 1 for the PS2, so they were very excited about this game, and for the most part it’s quite similar to the first one in regards to how it works and plays. From an adult point of view, I kind of enjoyed it actually, but I’m like a big kid myself, and I enjoy goofy stuff like this.

The graphics and animation are ok, of course they’re blocky characters, but that’s the PS2 for you, my kids didn’t care, and they instantly recognized the characters. Load times were decent, they weren’t long enough that my kids got annoyed or anxious so that’s a good thing. Quite a bit of the game is cut scenes, so you’ll be doing a lot of watching, but it tells the story of the movie, and without it it might get a bit boring.

One of the problems I think with the gameplay is that the controls just feel sluggish at times, it causes the character you’re playing to not do what you want it to do at times.

The last video I’ve got for you is actually a continuation of the first, it’s when they get to Africa and how they got there.

Conclusion:
I can’t be too hard on this game, it’s a kids game and my kids like it quite a bit, they enjoy playing the multiplayer games and even the single player version as well.

They don’t seem to be bothered by the funky controls, they enjoy the game to much to let something like that bother them.

Overall it’s not a bad game for kids, if you’ve got children that like Madagascar and its characters then I can say go and get it as if they’re like my kids they’ll enjoy it and get a kick out of playing their favorite characters.

Pros:
Great kids game
Easy to play and figure out
Many of the games you can play over and over until you get it right
Great for more than one player
Lots of stuff to do

Cons:
Controls can be sluggish at times
Some of the games can be frustrating at points
Cons3