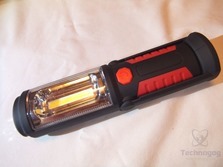 Up for review today I’ve got another flashlight but it’s not really a flashlight but yet it is a flashlight?! It’s called the Multi-function LED worklight and flashlight and it’s from a company called Aennon. The light has a five LED light on the front that is the flashlight part, but the main part is a 150 lumen COB LED on the top of it that produces a bright white light to light up your work area. The light has magnets to attach to metal surface, but there’s a hook or you can stand it up by itself and it can be positioned at multiple angles to get light where you need it. Read on to learn more… 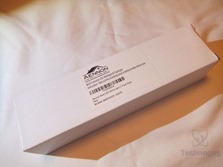 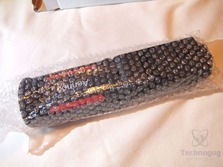 The light is mostly black with red accents, the grip and the power button are red basically. It’s about 9 x 2.5 x 1.9 inches and weighs in about slightly over seven ounces. It’s made of a rubberized plastic to make and it feels durable and well made. 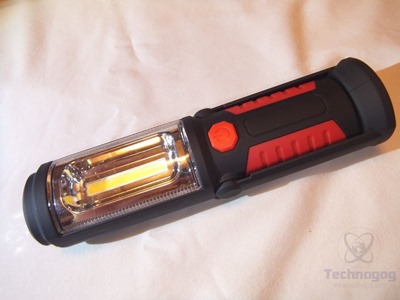 On the top of the light is a COB LED which can produce 150 lumens of white light, this is what I consider the main light or worklight. 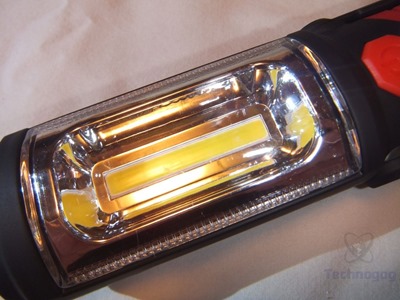 On the front is a five LED light that produces 30 lumens of light which is the flashlight. 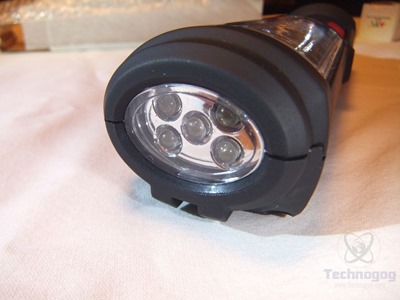 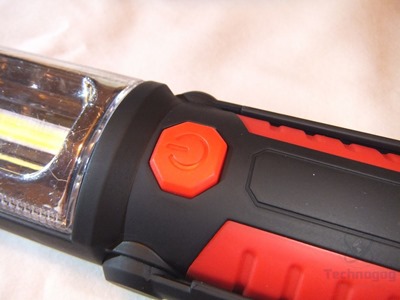 On the back end you’ll find two circular magnets so you can attach the light to metal surfaces for mounting. 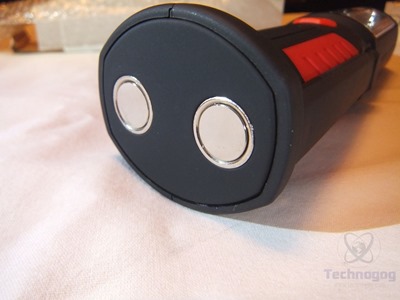 A section of the light or part of the handle can rotate backwards and forwards so you can stand the light up or hang it with the magnets and position it where you need light. The section locks in place actually with audible clicks so you know it’s lock and it makes sure the light stays at the angle you set it. There are six angles in total you can set the light at, three towards the front and three towards the back. Seven angles actually if you include when it’s fully closed. 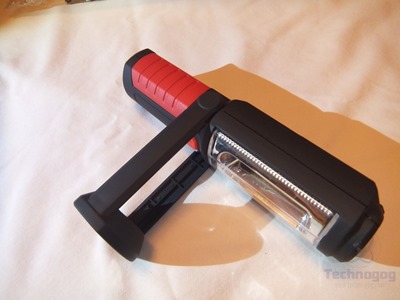 The light can stand by itself or you can use the magnets but on the back is also a retractable hook so you can hang the light as well. The hook rotates all around so you can position the light where you need more illumination. 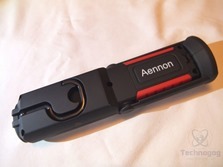 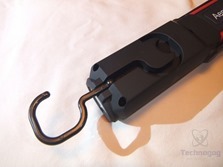 The battery compartment is located below the hook in what would be the handle of the flashlight. The light uses three AA batteries, which they include for you, that should last over ten hours. 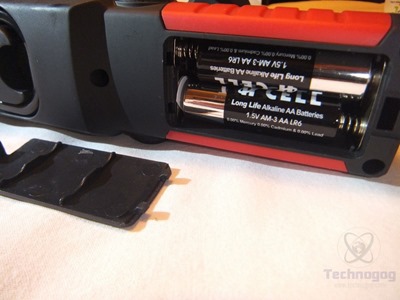 The front five LEDs work fine for a basic flashlight, I consider them more of a bonus feature as the COB LED is the brighter one and the one I use more often really. 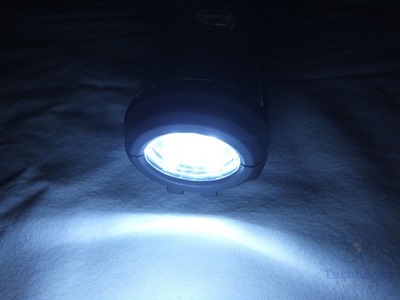 The COB LED is very bright and it produces a white light and not the blue tinged light you get from some LEDs. This light is the main light really, at least I think it is, as it’s very useful for all sorts of things. 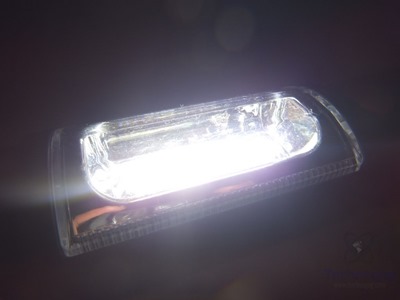 I’ve been using this light for all sorts of things around the house. The COB LED comes in very handy, we’ve got brown carpets and when you drop something small on them like a screw it’s hard to see, the COB LED really lights up the area.

I’ve used the light for many other things as well like working in the basement and I used both the magnets and the hook for mounting.

I do like the fact that it can be positioned at an angle and it will stay there, it makes things easier for sure.

I’ve even used the COB LED to help me take pictures of other products, it’s great as I can hang it or position it where I need the light the most.

I like the Aennon LED worklight a lot but I just wish the magnets were stronger. I’ve been using it often and I found that the magnets really are not strong enough to hold the light if you don’t carefully attach it to the surface. I keep it under my desk which is metal and I just reach under and stick the light there, many times it just falls off. Other than the magnets this is a great light overall.

The COB LED is very bright and it’s actually a white light and not the blue you see from other supposed white LEDs.

The COB LED is the main light in my opinion but there is a built-in five LED light on the front so it acts like a flashlight. You can hold the light just as you would a flashlight.

This is one of those products that has multiple uses around the home or I would even take it camping or hiking with me. You could toss it in your toolbox or in your car and always have it handy when you need it most.

It would be a great light for emergency uses like changing a tire in the dark as you can just use the magnets and stick it where ever you need it or you can stand it up and it will stay where you put it.

All in all the Aennon LED worklight a lot, it has many uses and can really come in handy.