Diablotek has sent us over another case for review, this one is called the Abyss and it’s mid tower case yes, but it’s also what’s considered a budget case as it’s rather inexpensive. The Abyss I got for review is all white inside and out with plenty of room for large video cards and a few hard drives. The case comes ready for USB 3.0 and even water cooling if you want to go that route. It’s not a bad case overall but it does have a few flaws…

So the case comes in a box as expected and it’s packaged well just like other cases with styrofoam. 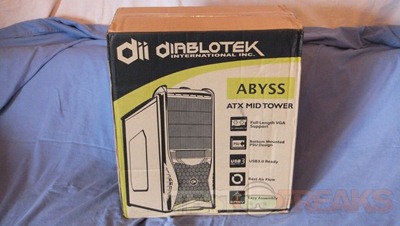 The color white for a PC case is a nice change from the common black. The right side of the case is plain except for where it slicks out a bit to allow you more room to run wires behind the motherboard tray. 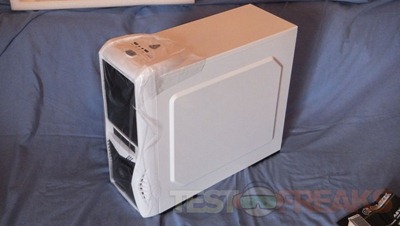 The case is white and black really with four 5.25” bays, and one 3.5” bay as well. The bottom is for ventilation and it’s sort of shaped like and ‘X’. 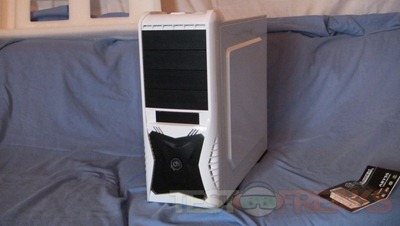 On the top of the case you’ll find the control panel with buttons for power and reset along with audio jacks and USB 3.0 ports. You’ll also notice what looks like a card reader but it really isn’t. Not sure what the deal there is?! You’ll also notice there are no USB 2.0 ports at all. This is the first case I’ve seen without any USB 2.0 ports and I don’t think enough people really have USB 3.0 yet to justify removing the USB 2.0 ports altogether. 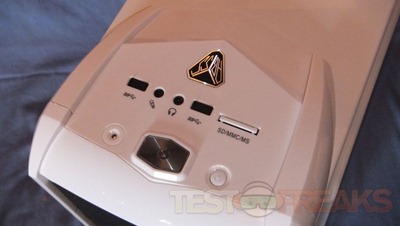 The left side has a smoke colored window so you can show off your system once you get it in the case. From this profile view you can also see the front bezel isn’t flat and the bottom sticks out of bit. 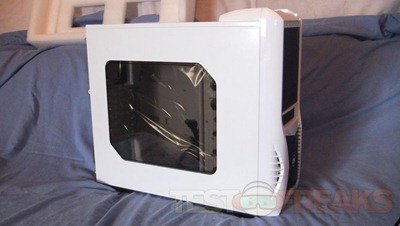 Moving around the back you’ll find a 120mm fan pre-installed along with holes for water cooling along with the common stuff like PCI slots, I/O and PSU space. 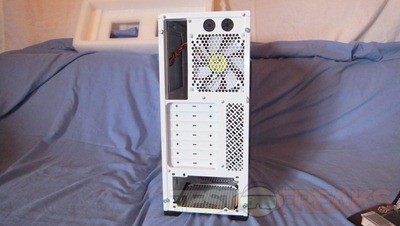 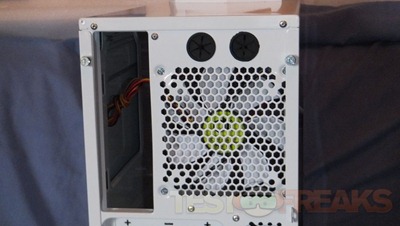 On the bottom you’ll find four large feet along with two filters for the PSU and one for the optional fan. The filters have tabs on them to help you easily remove and clean them. 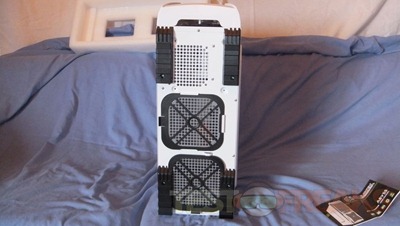 Removing the right panel you’ll find the back of the motherboard tray with a nice large cutout where the CPU would be located to make it easier for swapping coolers. 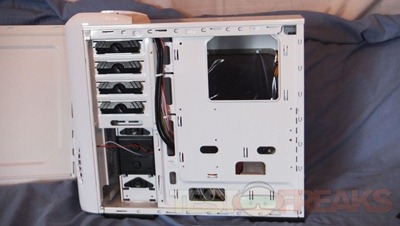 The tray has plenty of spaces to tie your wires down and cutouts for routing wires. 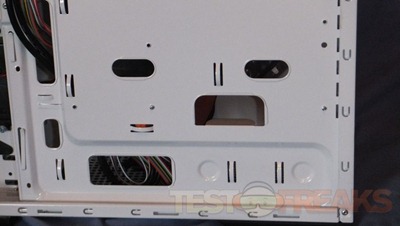 The hard drive cage does have a black section marked ‘Remove for long card’ and it’s supposedly removable to make room for larger video cards to fit in the case batter. 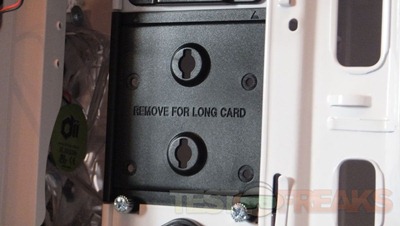 The front bezel comes off but not what I would call easily. It took quite a of prying and force to get the front off really. 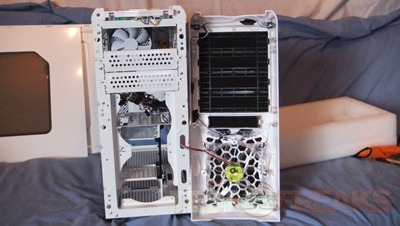 When you take off the bezel you’ll find two fan mounts but for whatever reason Diablotek mounted the fan on the actual bezel?! It just makes no sense to me.

On the bezel you’ll see four bay covers with filters on them along with a smaller 3.5” bay cover. 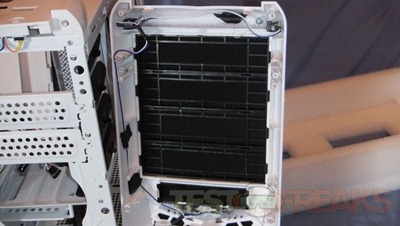 Looking at the front bezel I see a small design issue, the top fan bracket blocks the fourth 5.25” drive bay.  Personally I don’t see it as an issue as the most I’ve installed is three devices anyway but I’m sure others will find issue with it. So bad move on the part of Diablotek. 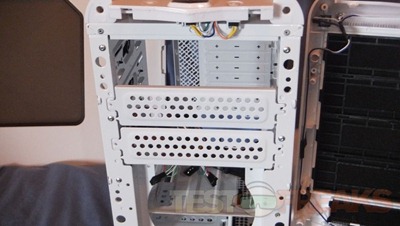 Moving around the left side and taking the side off you’ll first notice the orange bag in there that contains a very small amount of accessories. Instead of including zip ties Diablotek included twist ties oddly… 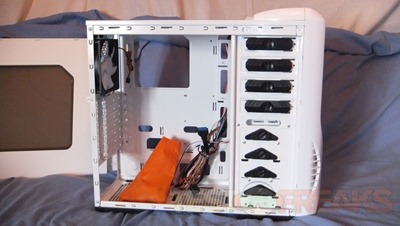 On the left side you’ll find the same plastic clips. 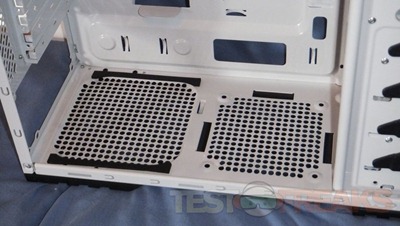 Here’s a better view of the rear fan along with the water cooling holes. 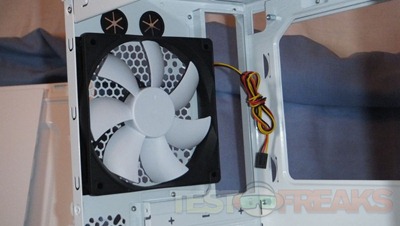 I mentioned earlier about the fan bracket, well here’s the view from the inside of the case, yeah it blocks the bay. 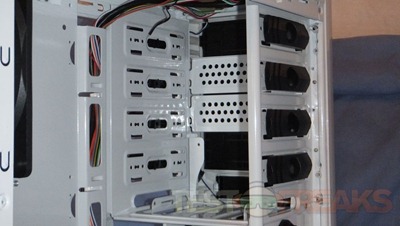 Then here’s the view of the hard drive cage: 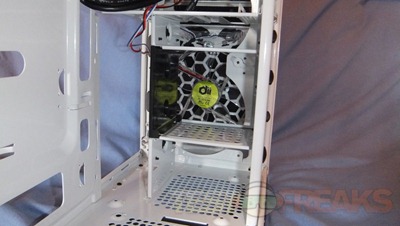 So the last thing to see is the cables and there’ not much really to look at, it’s just the standard stuff. 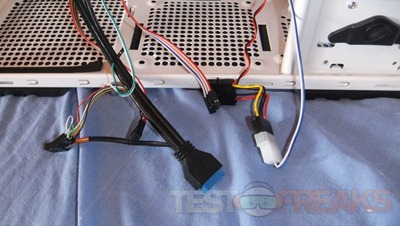 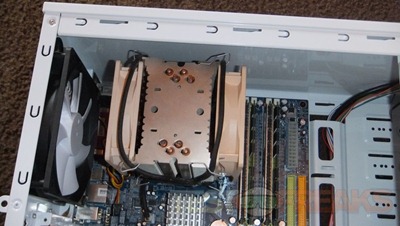 Here’s a few things installed and yes there is room in there to work. 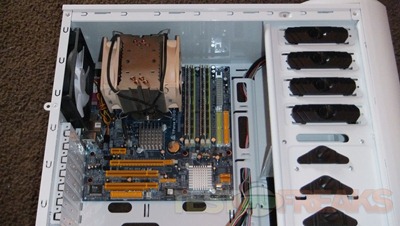 Once you get everything installed you’ll find it gets cramped rather quickly and you’ll certainly want to do a lot of wire management. 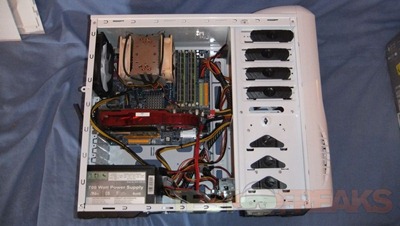 I also found that if you use a large video card you probably won’t be able to use the hard drive bay that’s adjacent to it especially is the card has power connectors on the back edge. 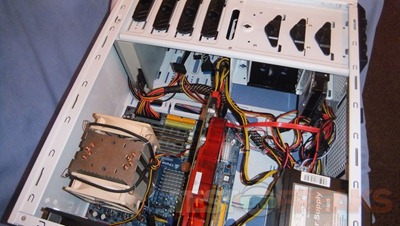 Speaking of installing video cards and hard drives, the space that you can remove for longer video cards doesn’t line up with the video card. I also found that it’s virtually impossible to install a hard drive to that part of the rack with the removable section. I tried to install my hard drive there and broke two of the installation clips and then just gave up and installed it lower. The removable section seems to be thicker than the rest of the rack making the clips useless. You could install a hard drive there but you’ll need to use screws to do it.

I always try and install my optical drives on the top of the case, it’s just a personal preference though, but that’s what I did. 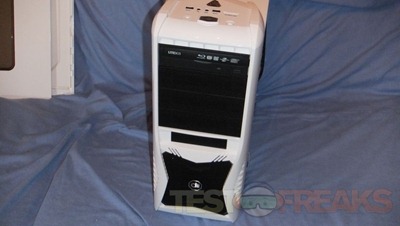 When I turned the system on I was struck by just how bright the white LEDs are in the fan and top of the case. Almost the whole front bezel lights up really. 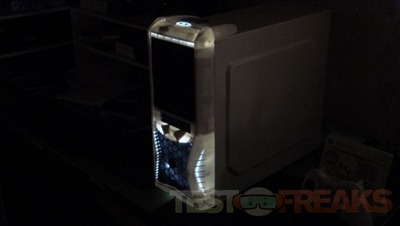 In the dark it’s very bright, this was taken just in a dark room but it was daylight outside: 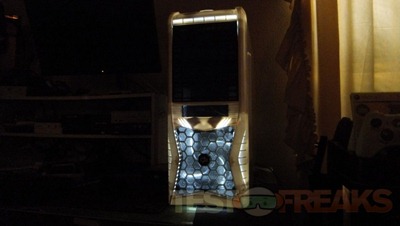 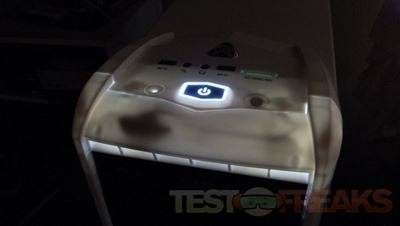 Then here’s the bottom section where you can really see the two pieces of tape on the back of the bezel….. 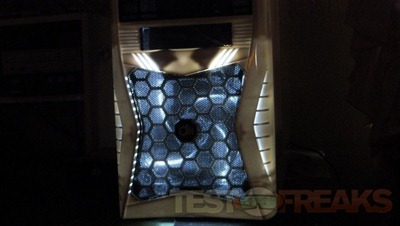 Yes it’s bright and surprisingly quiet and it does seems to keep the system cool.

Conclusion:
The Diablotek Abyss isn’t bad for the price at all, if you’re not expecting much then I don’t think you’ll be disappointed.  It’s not a bad case overall, but it just isn’t a great case either, there’s nothing really that sets it apart from other cases on the market today. The price is low around $50 and that’s it’s only saving grace, but even for that low price I think you could find a better case.

The case just has too many flaws that can’t be overlooked, especially something as little as the USB 2.0 ports missing from the front of the case.

Honestly I’m not exactly sure about this case as it just seems hurried and almost cheap with the extra tape and missing SD slot and the whole blocking the 5.25” bay design they’ve got going there. It’s obvious something was or should I say some things were missed in the whole design and production process.

Cons:
-Video card spacer doesn’t line up with video cards
-Broke clip while trying to install hard drive
-Space for SD Card reader but no reader is actually there
-Fan bracket blocks drive bay
-No USB 2.0 ports at all
-Space can get cramped with hard drive and video card on same level