Up for review today I’ve got another microSD card, well actually it’s technically a microSDXC card. The card is the newest 64gb from Kingston which is a class 10 card offering minimum speeds of 10 mb/s, which should be fine for any HD recording that you might need or want to do. I’ve put it up for comparison against several other microSD cards I’ve got on hand and this new card from Kingston performs well overall. It’s not the fastest of the bunch, but it sure is the biggest, so if you need storage space, then Kingston has got you covered.

So it’s a microSDXC or microSD card basically. Not much to really look at in terms of product shots for sure. There is a difference of course between microSDHC and microSDXC, but really the only thing to worry about would be is your device compatible with sdxc cards or not?!

The package is cardboard with plastic and you can see the microSD card itself and the adapter on the front. 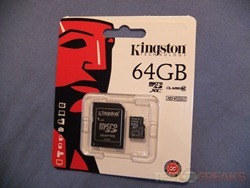 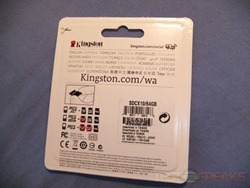 Inside you’ll only find the card and adapter. 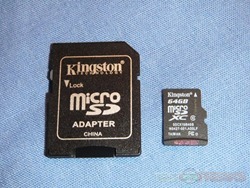 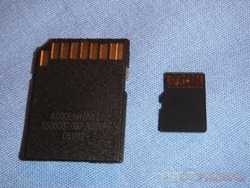 Then here’s the card itself: 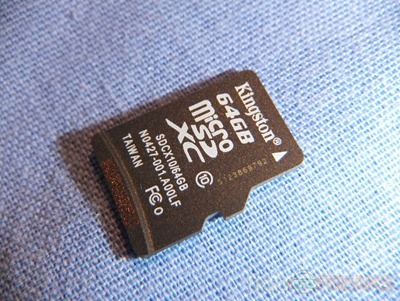 Then here’s a handy graph showing you the results in kb/s for both read and write. I ordered the chart using the Read scores for reference, slowest to fastest. 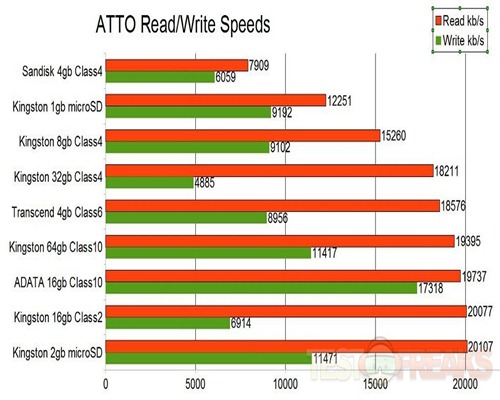 Specs for the Kingston card say you should get a minimum of 10 mb/s speeds and I think we more than hit that. The card almost doubled that at a little over 19 mb/s for Read Speeds. For Write speeds it goes just over 11 mb/s, which is still more than the specs state.

10MB/s is the minimum write speed needed for HD recording so the results from the Kingston show HD recording should work perfectly fine with this card.

Then again, personally, I wouldn’t be using this card for HD recording really, it will most likely be in a tablet used for storage and reading from really. It all depends on your needs really I guess, but it will work for HD recording and I guess that’s what counts.

On the two class 10 cards I have I also ran CrystalDiskMark. 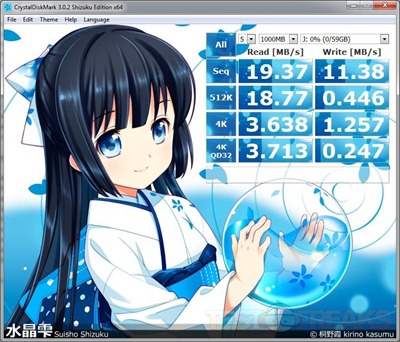 Then here’s the ADATA 16gb Class 10 results, again pretty much the same as ATTO. The Kingston card appears to do better at writes at 4K and 4K queue depth 32. 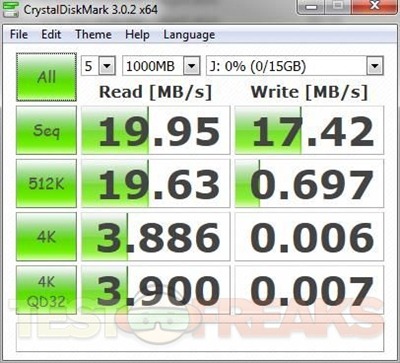 Yes I know the interfaces look different, apparently you can use  themes with CrystalDiskmark now so I had to check it out, but it’s the same test no matter what it looks like.

I also ran the SiSoft Sandra Removable Storage test, which gives us results in IOPS.  No pretty chart for you, just some raw data.

Then here’s the ADATA overall results:

They look pretty much the same to me overall really.

The SiSoft Sandra test runs several individual tests for 4kB, 64kB, 1MB, 16MB and 256MB, the above is basically the average of all of them.

I grabbed the 256MB files test results for you:

Fairly close, with the ADATA coming out faster in the Write tests as we already know from the previous tests.

The card easily hits over 19 mb/s for Read speeds and a little over 11 mb/s for Write speeds, which is more than enough to handle any HD recording your might be doing.

If you need more space, 64GB is the largest capacity available right now and you might as well get it from a reputable company like Kingston.

Cons:
-Not the fastest in terms of write speeds