Kris, my editor will be the first to say that I am an Apple fan boy; which I guess is accurate as between my family we have an iPad, iPhone 3G, iPhone 4 and numerous iPods within our household. All these Apple devices need to be charged and on long trips need to be recharged sometimes before an AC outlet can be accessed.

Thankfully Mophie helps remedy this problem with a mega powered external battery named the juice pack powerstation. This 3600mAh external battery is designed to charge a multitude of USB based devices including the Apple mobile favorites mentioned above.

Mophie are the creators of the highly regarded juicepack battery/case chargers for the iPhone and iPod Touch so they know a thing or two about portable power. With the powerstation they have made an external battery that can charge almost any USB based device.

The mophie juice pack powerstation comes packaged in a black cardboard box with the device pictured on the front. Apparently mophie does not like capital letters as their brand and product name are all lower case. The back of the box lists the features of the battery in five languages.
v 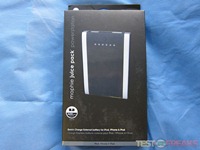 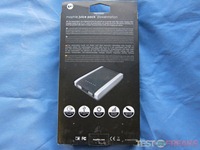 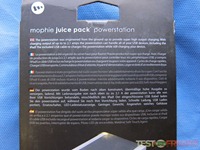 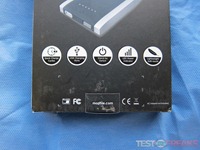 Inside the package is the mophie juice pack powerstation, a USB charging cable and User Manual. 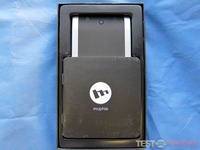 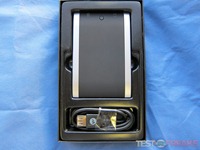 The juice pack powerstation comes pre-charged so you can charge your USB device immediately after purchasing the mophie unit. The unit is black and silver matching the appearance of the iPhone 4 juicepack air. 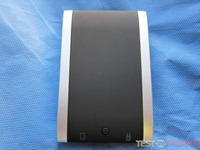 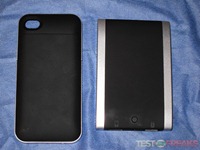 It has a black rubbery material in the middle and two silver borders on the sides. There is one button located at the bottom front of the device with an iPod and an outlet icon on each side. 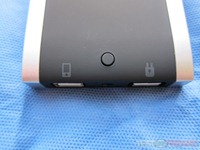 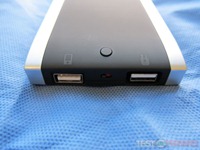 This LED Power button indicates the amount of charge via the six LEDs that are hidden just above this area. Six lights is a full charge and no lights means it’s time to charge the powerstation. 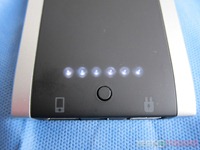 Beneath these icons are two USB ports. On is a standard USB connector that will attach to any typical USB cable such as the one found on an iPhone/iPod charge cable. The other input under the AC plug icon is a special connection that is used with the included mophie USB cable. Attaching this cable to the powerstation and the other end to an Apple AC iPod/iPhone/iPad connector will charge the external battery. 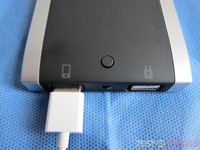 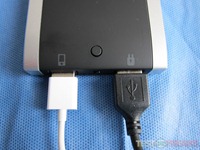 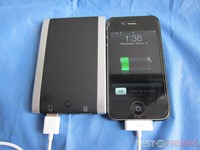 Centered between these USB ports is a standby switch.

The back is also black with the mophie website address found on the bottom left corner and some familiar electrical symbols on the lower right. 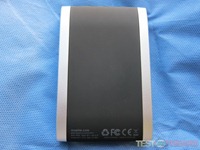 The included user manual has 3-4 pages of instructions in several languages.

This 3600mAh external battery will charge a wide range of USB based mobile devices including the iPhone and iPad as well as most usb based smartphones out there. With completely reengineered battery and electronics, the powerstation can charge your device at super-fast speeds too. The powerstation has brains, beauty and brawn – everything you’ve ever wanted from a travel companion. So travel with just one mobile battery charger to handle all your needs – – the powerstation!

Here’s a rundown of why this is the perfect travel battery charger:

Standby Switch
Waste-not, want-not. The integrated stand-by switch ensures there’s no drainage to the powerstation’s battery while it’s not in use.

Power Satisfaction
Capable of charging the power hungry iPad and other large USB-powered devices and smartphones.

Safety First
Built-in short circuit, overcharge and temperature protection. mophie’s got your back.

What’s inside the box?
• mophie powerstation
• USB charging cable
• User manual
• The opportunity to go for
days without a power outlet

I left the iPad idle during this time. It took two hours for the iPad to fully drain the powerstation and it brought the iPad battery to a 36% charge. I recharged the powerstation using the iPad AC charger since according to mophie that is the quickest way to “juice” up the battery. It took around three hours to replenish the six LED indicator lights on the powerstation.

Charging the iPad once again with its battery at around 35% with the mophie powerstation brought the iPad to around 62%. This seems to indicate that the capacity of the powerstation is about 1/3 of the iPad battery.

So it seems a fully charged powerstation can charge 2 1/2 smaller Apple devices to near full battery life or an iPad to about 30% battery capacity. Not too shabby.

Since the powerstation is a bring your own charge cable system you will need to keep your USB charge cables accessible when traveling with this device. The included USB cable is really important as it is needed to charge the powerstation and is not a standard cable, so don’t lose it or you will not be able to charge the mophie external battery otherwise. The three ways to charge this device is by connecting it to a computer powered USB, a “works with iPhone” USB wall adapter or the iPad USB wall adapter.

The BYOC (bring your own cable) system is a little bothersome as you must remember to bring the proper charging cable to get use out of the powerstation. Also the included USB cable is not a typical USB cable meaning if you lose it, you won’t be able to charge the powerstation.