I found a few others and thought it would be neat to see how they’ve changed. 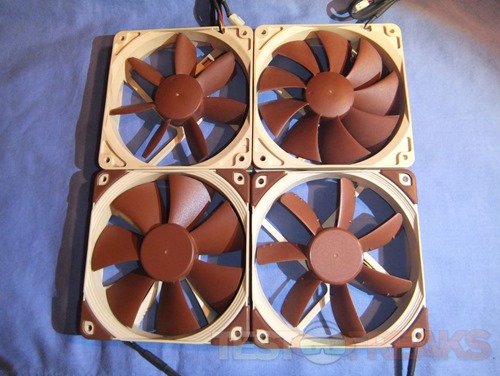 You can see Noctua seems to have started with thin straighter blades, then moved to thicker curved blades and then it’s back to the thinner blades but curved with this latest fan. maybe I shouldn’t say started with but more changed over time and evolved as it were. You’ll also notice most of the fans have seven blades, except for the NF-P12 which has nine blades.

Then here’s the backs of them, where you’ll notice the NF-F12 is the one that really looks different. (Same ordering as the above picture.) 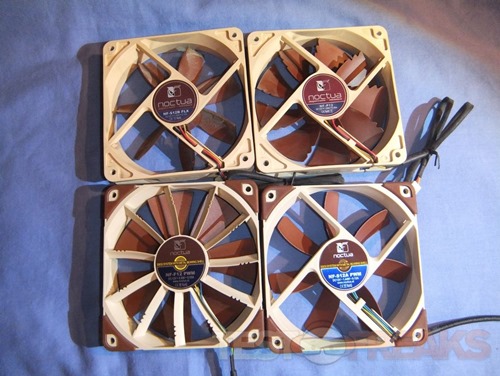 Before the NF-S12A PWM arrived for my review I was using the NF-F12 PWM with my Noctua NH-U12P CPU cooler. So I figured I’d compare the two. 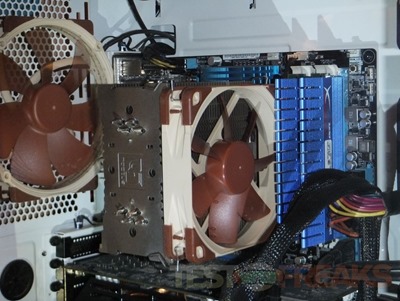 So what I did was test it like I would test a CPU cooler. I used CoreTemp to monitor and log CPU temperatures at idle and under load. I then averaged the temperatures out to get a single temp for the chart below.

For the NF-F12 PWM fan it was just connected to the motherboard fan header with no adapter, so it was running at full speed essentially or 1500 RPM.

For NF-S12A I tested both with and without the included adapter. The fan runs at 1200 RPM normally but with the adapter it runs at 900 RPM. 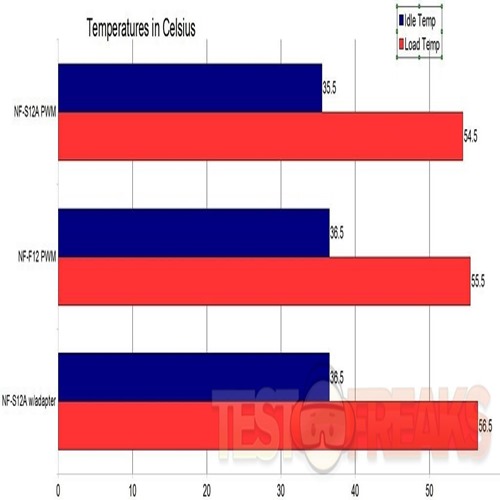 So here’s a surprise, the NF-S12A is running at 1200 RPM while the NF-F12 was running at 1500 RPM but yet the slower fan produced better results.

Using the adapter to lower the fan speed down to 900 RPM and that only gave us a one degree higher over the NF-F12 fan which was running at the 1500 RPM.

So I’m impressed, the NF-S12A was running at 600rpm slower than the NF-F12 but produced almost the same cooling performance.

As far as noise levels, using the fan I really noticed no additional noise coming from my system and my case sits about three feet from me on a table next to my desk.