Before initially installing the Ring it is recommended to fully charge the main unit using the included micro-USB cable with a compatible wall charger or computer USB port. The LED Ring light provides status information. During battery charging the LED spins blue then white and remains fully lit blue once at full capacity. During charging the free Ring app can be download from the appropriate app store – either Android, Windows or Apple. For testing I used an iOS based ecosystem.

The Ring app will provide step-by-step setup of the Ring Video Doorbell starting with account creation, followed by the Setup Wizard which lets the user select the device, name it, confirm its location, Wi-Fi setup and finally provide an installation video based on the location, power source and surface.

My house has vinyl siding on it, so installation was a little tricky in terms of getting the bracket level as there was some give to the surface when screwing the bracket in place. The other issue with a vinyl siding is that the bracket may bow slightly if you over tighten the screws. This makes putting the Ring onto the mounting hooks tricky, as they did not initially snap into place until I adjusted the bracket. Using a flat walled surface with the bracket should make this process seamless. 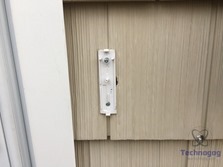 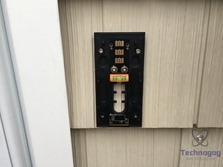 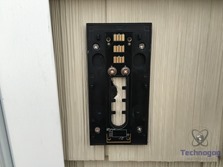 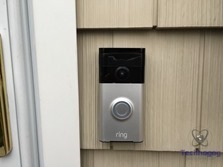 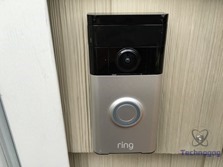 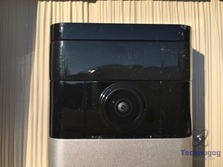 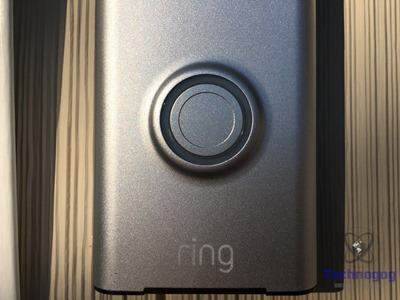 Once the Ring was snapped onto the bracket, use the Allen side bit with the screwdriver handle to tighten the two screws at the bottom. Now the Ring Video Doorbell is locked into place and cannot be easily stolen or removed. 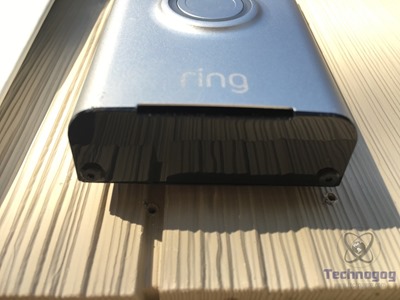 At this point when someone press the Ring’s LED button the Ring app sends out a notification to the connected device allowing the user to accept or decline the person at the door. If using an Apple Watch you will even get a notification on the watch although you cannot answer from the Apple Watch.

When accepting a “ring” at the door, it activates two-way communication between that person and the app user. Declining will give the impression that the user is not home or is unavailable. One of the beauties of the Ring is that you can answer the door anywhere your smartphone/tablet has Internet access whether at home or away.

Besides working as a doorbell the Ring has motion detection capability. Ring uses infrared heat signatures to differentiate motion from inanimate objects such as trees versus people. However, the heat signature of automobiles can also set it off so adjusting the range is advised to prevent false positives. From the app the sensitivity and range of the motion detection can be set. There is a video tutorial in the app for making these adjustments.

During the initial setup Ring offers a 30 day trial of Cloud Recording which is normally $3 per month or $30 for the year. With Cloud Recording one can review missed Recent Activity. This is a similar subscription model to the Dropcam (now known as Nest Cam), although much cheaper. 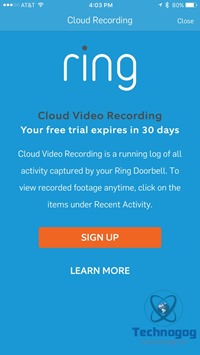 After a week of testing the Ring I learned a few things. The first is I have a lot of traffic in and out of my house. Being notified of motion is great although my initial settings had to be scaled back as I had alerts during garbage and recycling collection mornings. Ring allows the motion detection sensitivity to be adjusted so that issue was easily address.

Receiving motion alerts is helpful in knowing when someone is near your door. One issue is if the motion is brief then opening the app for that notification will usually provide an unoccupied view outside your door. If using Cloud Recording the footage takes a few minutes to populate within the app.

The video quality for the Ring Video Doorbell is pretty good in daylight while the night vision video is acceptable but definitely not as crisp. Ring shoots video through a fish eye lens, which is not as sharp as regular camera lenses. During this past week the weather on the East Coast dipped into the single digits and the Ring handled this temperature extreme without any issues. 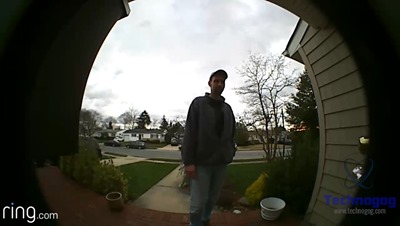 Physically the Ring has a nice appearance but is a little too plasticky in its feel and construction. The build materials are probably to help keep the Wi-Fi signal strength at its peak. The main button only pushes in a millimeter or so making it easy to feel like you pressed the button when you actually have not.

While reviewing the Ring they updated their app making several user interface improvements. The main screen of the Ring app has the My Devices and Settings screens. From the Settings screen the user can manage their Ring account, Cloud Recording Plan, check out the Ring Store, view the Help Center or Log Out. 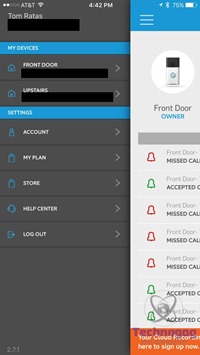 When selecting the My Devices tab the screen will show all the devices as well as All Activity, Rings and Motion history and recordings for review if subscribed to the Cloud Recording plan. Selecting an individual device shows the status of the battery, whether the Ring and Motion alerts are enabled or disabled along with recent activity for that particular device, Motion Settings, Shared Users and Linked Chimes. 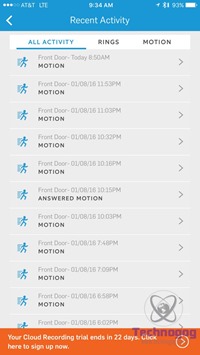 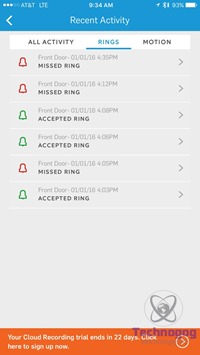 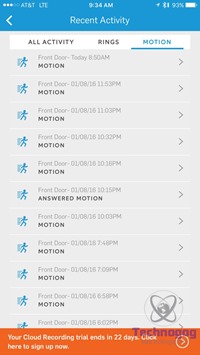 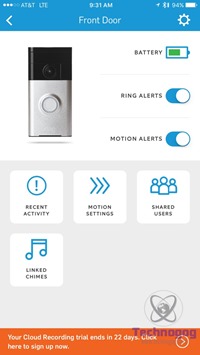 My other peeve with the Ring is when using it wirelessly instead of hard wired you need an external chime to hear the doorbell if not near one’s smartphone or tablet. Ring sells the Chime which addresses this issue but that adds another $30 to the cost of setup. For this review Ring supplied us with a Chime. 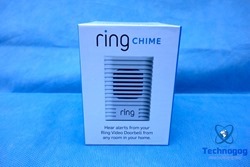 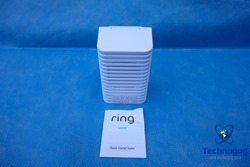 Plugging the Chime into an outlet and then running the setup process through the Ring app takes only a few minutes. Once connected to the user’s account the Chime will sound whenever the Ring button is pressed outside your door. You can also enable the Chime to sound with motion alerts.

At the time of this review the Ring and Chime only has one tone option. My press contact did inform me that they will offer ring tone customization some time in the future.

The battery life is rated for six months however, after a week of use mine is at 70%. Hopefully I failed to fully charge the Ring when I first installed it because at this rate I will only get a month or two off a charge.