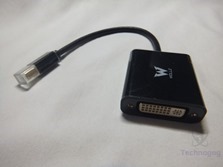 Not many monitors come with a Displayport connection but most every video card has a connector for Displayport on it so you’ll need an adapter like what I have today for review from a company called Wollz. This adapter is small but it’s very well made and it’s inexpensive at under $10 but it goes from mini Displayport to DVI and it works fine from my testing. This is a passive adapter so you can’t connect more than two monitors with it though. Read on to learn more…

Portable mini DP to DVI adapter connects your computer or PC equipped with DisplayPort/Thunderbolt to monitor or display or projector with DVI port, supports video signal up to 1920×1200 and 1080P FHD (a separate DVI cable is required)
MDP to DVI converter cable is made of TPE material, the two connectors are gold-plated, it is sturdy and durable

Connection Notes
Input: Mini DisplayPort / Thunderbolt Port Male
Output: 24+5 Pin DVI Female; A separate DVI cable (sold separately) is required
Can only convert signal from Mini DisplayPort to DVI. This is not a bi-directional adapter
Connect up to 2 monitors via AMD Eyefinity Multi-Monitor graphics card (one adapter per monitor)

The Wollz DVI adapter ships in a small brown bubble envelope and inside you’ll find the adapter in a plastic zip style bag, no instructions are included but you really don’t need them as it’s just plug and play really. 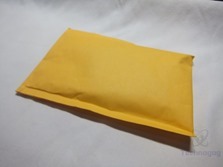 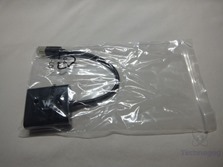 The adapter is basically a small black box with a female DVI connection in it and then a cable with a miniDP connection on the end. The adapter itself is 1.75 inches by about 1.5 inches and it’s about .5 inches thick and there’s the Wollz logo on the top of it in white. The cable coming from the adapter is 7 inches including the mini Displayport connector that comes with a protective plastic cover. The box is sturdy, I tried to squeeze it as hard as I could with my fingers and it barely moved so I’d say it’s very well made and sturdy. 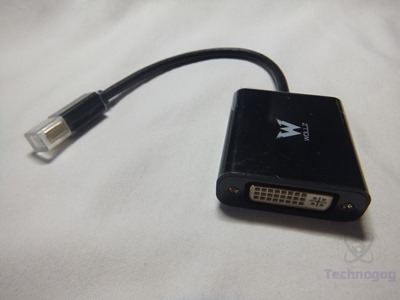 I had planned to use this to add a third monitor to my video card but realized that it’s not active but a passive adapter so I couldn’t use it that way. For testing I disconnected one of my monitors and connected another monitor with this Wollz adapter and it worked fine then.

Just keep in mind that this is a passive adapter which means you can’t connect more than two of these to your video card.