During my visit to the Pepcom Holiday Spectacular the folks from Seagate were previewing their latest docks for their FreeAgent Go hard drives – the Free Agent Theatre and the Free Agent Dockstar. Of course to be able to use these drives one needs to have a FreeAgent Go portable hard drive. Seagate was kind enough to provide a FreeAgent Go for technogog to test out before we get a chance to check out one or both of the above-mentioned docks.

The Seagate FreeAgent Go arrives in the plastic clamshell packaging that requires the Jaws of Life to open. Why companies still use this packaging is beyond me. Using surgical precision and a pair of scissors I was able to secure the contents of the package without any bodily harm to myself or the contents. Found within packaging is the Seagate FreeAgent Go, a USB cable (mini-USB to USB Type A) and a User guide. 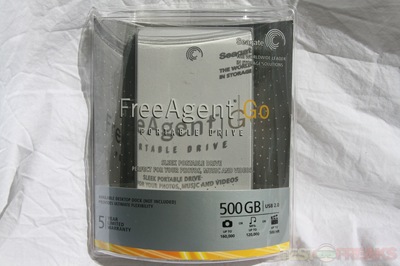 Unlike its competitors whose drives are generally protected by a plastic shell, the Seagate FreeAgent Go is composed of a metal on the top and bottom of the enclosure with a white plastic section in the middle. The top of the drive has a brushed metal texture and tapers down on the front of the drive which gives it a sleek and sexy look. Just above this taper is the Seagate logo embossed in the metal.

Towards the back of the drive we see a series of small pinhole openings which help vent the drive. Beneath these opening is a white activity indicator light. When the drive is in use this light pulsates instead of blinking. The light can be turned off via the Seagate Manager software found on the drive.

At the end of the device is a mini USB connector which attaches to the included cable. To use the drive simply plug in this cable into a powered PC or a Mac USB port. Previous versions of the Seagate FreeAgent Go used a Y-USB cable to provide enough power for the drive. This newer model only requires a single USB port for providing the 500 milliamps required for power. Included with the drive is a Quick Start Guide which pictorially demonstrates how to use the drive with a computer. For more detailed information there is a user’s guide found on the actual hard drive. Also included on this drive is the Seagate Manager software which controls the settings on the drive and automated incremental backups, file and folder synchronization and encryption. The hard drive works perfectly with all three operating systems but the additional bundled software is designed for Windows XP and Vista. Mac and Linux users need not apply. The one caveat with this software is it only works with Seagate hard drives. Within the Seagate Manager the user can configure various settings such as power management, encryption, and closure lighting configurations as well as testing the hard drive from the My Drives tab. 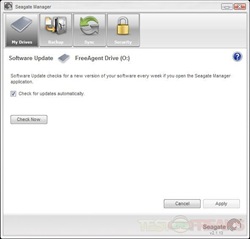 Backups, syncing and encryption are available under the Backup, Sync and Security tabs at the top of the manager. 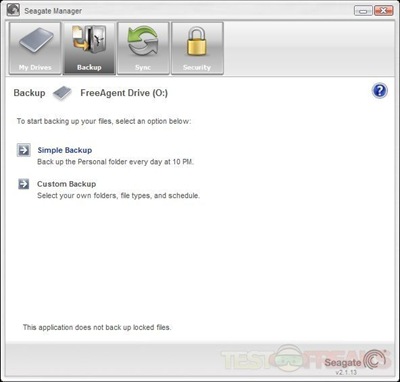 Missing from the Seagate software bundle is the previously included Ceedo program; which allowed installation and running of applications off the Seagate drive itself.

The ultimate portable storage solution with the world’s first hard drive docking station for easy access to all your stuff. Sleek, ultra-thin design that’s as stylish as it is striking.

Carry your data anywhere you want
Sync data between computers
Back up files using the optional dock
Store photos, music, and other files

Big capacity. Small package.
Get a lot without carrying a lot. And look good while you do it.
Available in 160GB, 250GB, 320GB, 500GB or 640GB capacity
The thinnest portable drive available. Even the cables are compact
Ten different colors to suit your style and let you tell one FreeAgent Go from the next

If it’s not easy, it won’t happen.
Automatic backup for peace of mind
Encryption technology keeps your files safe
Easy synchronization means you always have the most current version with you
Fast data transfer with USB

An optional desktop dock makes syncing a snap.
Access your files without fumbling for cables
Preloaded software means easy setup
All the little extras.
You don’t choose a drive based on these things. But you love them once you have them.
Power management features save energy
Five-year limited warranty

On DiskBench we see the Seagate FreeAgent Go was faster in copying and file creation, while the two drives were nearly equal in file reading. With the Sandra Physical Disks Benchmark we see an average read performance of 28.36 MB/s. These tests indicate that the Seagate FreeAgent Go is on par if not better than its main competitor. The power saving utility helps keeps the hard drive in standby when not in use preventing the Seagate FreeAgent Go from getting unnecessarily hot. The drive is thinner than the Passport and has a “solid” feel due to its metallic composition. 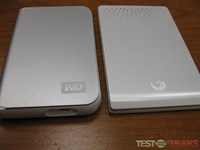 On OS X the Seagate FreeAgent Go ran perfectly although there were no Seagate tools to be used on the Mac OS. Snow Leopard did list the drive volume to be 500GB as opposed to Windows which listed the drive as having a 465GB capacity.

Vista 64bit Windows versions do not work with the Seagate Manager. Sorry kids, it only a 32bit program. This is unfortunate as more and more people are starting to migrate into the world of 64 bit computing. Hopefully Seagate will resolve this issue with a future update.

Seagates revamp of their FreeAgent Go line is a big success. The new drives look and feel like they are meant to last. Their brushed metal appearance makes these drives look sleek and sexy. Want to personalize the drive so more? Then hop on over to MusicSkins and pick out a design for the FreeAgent Go.

As more people digitize their lives with pictures, videos and music; having up to 640 MB of storage in the palm of your hand is almost a necessity. The additional features found in the Seagate Manager make the Seagate FreeAgent Go even more useful. Plus the added ability of docking these drives onto Home Theatre and Networking solutions make these more than just a place to store ones data. Now you can watch movies, view pictures or listen to movies on your home entertainment system by plugging the Seagate FreeAgent Go into the Free Agent Theatre + or having worldwide access to your files and data through the internet using the Free Agent StarDock.

There are plenty of external hard drives out on the market, but if you want something that is stylish, well designed and has features unavailable to all the other drives then the Seagate FreeAgent Go is the one to get.