Here he comes, here comes speed racer, he’s a demon on wheels!! -I couldn’t resist, I love that theme song, the old, original one of course, I grew up watching him battle, jump, cut or even dive under water on his way across the race track. Yeah I’m old, but it’s still one of the best anime shows out there, and now a new generation has been introduced to the Mach 5 and the Racer family with the release of the new movie. I have to admit I was sort of disappointed by the new movie, but I did enjoy it though, now I’ve got a chance to review the Playstation 2 version of Speed Racer The Video Game.

Most movie based video games really aren’t that good, but Speed Racer The Videogame does a great job at bringing the sights, sounds, action and even the overall feel of the Wachowskis movie to your little screen for you to be part of the action. Speed Racer the Videogame takes place after the events in the movie, so it’s sort of a continuation, but not really, as there’s no real story to the game just racing.

Of course if you’re looking for any semblance of the original Speed Racer then you’ll have to go somewhere else, as this new version is nothing like the original show.

Gameplay is fun but it can get rather repetitive and sort of tedious as it’s the same tracks over and over again with some races lasting over five minutes, then again I’m an adult and it takes a bit more to keep me interested. My children love the game, they’ve been playing it non-stop since I handed it over to them, they think it’s just so cool, in fact they went clothes shopping recently and had to have Speed Racer pajamas! That should tell you something about how much they enjoy the game, and actually they’ve gotten pretty far in the game, though of course they haven’t got the whole control scheme down yet, just the basic ideas behind it, and that’s enough for now I guess to get them by.

So, as with every other PS2 game it comes in a nice box, with an instruction manual 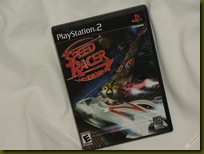 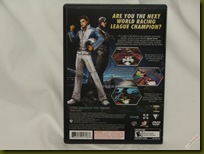 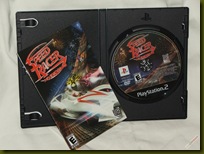 To start this off I figured a movie of the intro would work well, I hooked my PS2 up to my computer actually using the AutumnWave OnAir GT HDTV Receiver, which also has composite and s-video inputs as well. It’s a great little product that you’ll see reviewed here by Tom in about a week…

Anyway the video tells the story behind the game, narrated by Racer X, we find out that it’s a continuation of the movie essentially, the game takes place sometime after the events in the movie, or basically further along in Speed Racer’s career, but you don’t have to play as Speed, you can play one of the other characters and more will be unlocked as you progress though the game.

Speed Racer: the Videogame for PS2

In Speed Racer: The Videogame, developed by Sidhe Interactive for the PlayStation2 system, players will race at amazing speeds and engage in “Car-Fu” battles to outmaneuver opponents as they jump, flip, smash and spin competing cars off the track. Select from 25 different drivers and their extreme cars as players take to the track in an effort to win the illustrious World Racing League cup. Speed Racer: The Videogame for PlayStation 2 system allows players to experience all the twists and turns of the film’s racing sequences with new racers and a new PlayStation2 system exclusive track. Jump behind the wheel of Speed’s T-180 race car the Mach 6, or the specially designed T-180 race cars of other Speed Racer characters such as Racer X, Trixie and, exclusive to the Playstation2 system, fan-favorite Chim-Chim.

Gameplay is rather fun, the whole psychedelic thing going on is a bit shocking on the eyes at first, but after a few minutes of play you get your bearings.

There’s several things you can do in the game besides just racing, they’ve got a ‘fighting system’ called Car-Fu where you can perform certain stunts to damage and /or knock your opponents out of the race. And yes Speed Racers famous car jacks are included, you can jump straight up, left, right, flip forward or backwards using the right analog stick to control the jacks.

There’s also a Boost system where a meter fills up to allow you to get a short speed boost, the meter can be filled by driving without crashing and performing Car-Fu. There are four stages of the Boost as well, to get to the fourth stage the bar will have to fill up four times essentially. The fourth stage is called the ‘Zone’ where you’re flying along at top speed and are also invincible, it’s also a very interesting light show.

The X button makes your car do a 180 degree turn, or if in boost mode it can do a 360 or a continuous spinning attack.

Another feature is Alliances, here you can align or befriend another driver, they won’t attack your car and they’ll actually help you by attacking your rivals if they can.

Controls are fine, they seemed very responsive. You control the car with the left analog stick for basic control, but you can use the left/right pad buttons to strafe or slide side to side, I found it more precise than using the analog stick at times.

If you saw the movie then you saw how they slid around corners, or ‘drifting’ as it’s called, you can do this as well in the game, and the pad buttons can be used here as well to help control your drift.

There’s also a nice tutorial section that can help you learn all the Car-Fu tricks and basic car maneuvers.

The soundtrack isn’t too bad, but it does get old after a couple hours a playing.

Here’s two in game movies for you to check out:

this second movie is where I tried to do a bit more tricks with the car or ‘Car-Fu’ as it were..

Here’s quite a few screenshots for you, I didn’t include every single car as to not spoil the surprise for anyone, but it is most of them that can be unlocked… 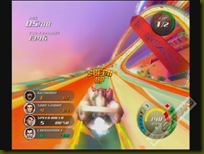 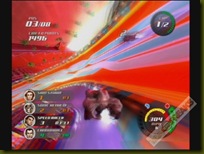 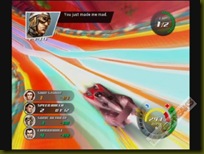 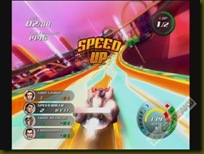 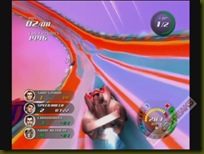 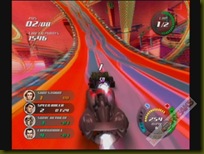 There are some cheat codes out there already for the PS2 version of Speed Racer, so after I sat and played for hours on end, I decided of have a bit of fun. One of the codes is for unlimited ‘Boost’ which can put you in the ‘Zone’ forever really, as long as your car is facing forward you can activate the Zone mode by tapping L2 four times. So here’s a video of basically playing an entire level while in the zone.. really trippy dudes!

To sort of finish this off I’ve got a final movie of the credits, you might wonder why I included the credits but I thought the whole thing was rather cool, it shows a lot of the work and animation, it’s very interesting actually…

Speed Racer the Videogame for PS2 is a good game, it does an exceptional job at bringing the look and feel of the movie to the console, and it’s actually rather fun to play.

Gameplay is fun but can be tedious at times, some of the levels, coming in at over five minutes of non-stop racing, can be a bit too much. Especially on the first level where it’s fairly easy to get up in first place and stay there, kinda boring really just driving along looking at the scenery for 5+ minutes. It also get repetitive as well, the same tracks over and over again and again, I mean they could have added more tracks to the race really. In championship mode you move along yes, but you just race the same tracks again and again basically with a new one opening up now and then as you progress.

Though I was a bit disappointed with it, watching the intro I was expecting some sort of storyline to be played out, but there was none at all. It would have been nice to have a story mode maybe where you can continue Speeds’ career and learn what’s going on with the other characters. Growing up on Speed Racer, it might be just me that would like something like this in the game, but really though the game needs something and that might have been it…

Personally after an hour of playing I was rather bored with it, but I continued on because it’s a review… on the other hand though my kids (6 and 7 year old boys) have been playing non-stop for days, I have to tell them to stop playing and go do something else or they would be on it from the time they get up till they go to bed. So if you’re an older gamer you might find the game a bit boring and tedious, but younger gamers will love it, if you’ve got a kid who’s a Speed Racer fan then I can honestly say get this for them, if they’re like my kids they’ll thank you for it and you won’t see them again for quite a while!

-Gets tedious and repetitive

-Long races, over 5 minutes for some

-Not quite what I expected, no story or anything like that