Today for review I’ve got another game for the Nintendo Wii, and again it’s from THQ. The game is World of Zoo and it’s a game that is truly aimed at smaller children, it’s a game that fits into a category all by itself really. You might think it’s some Zoo Tycoon type game, but there you would be very mistaken, it’s nothing like it at all. This game is unique and it’s actually a lot of fun to play, it’s one that younger children will just love. In World of Zoo you not only have your own zoo, but you can even create your own customized animals and then play with, take care of them and even pet them. It’s an overly cute game yes, but that’s not a bad thing because it’s aimed at young children and World of Zoo is one of those games that is just perfectly made for children.

As a parent of young children I try not to expose them to violence in gaming and other media, with games I can pretty much control what they play. World of Zoo is pretty much the perfect game for small children. It’s bright and colorful, creative and fun and overall it’s a game that’s easy to play and it even will teach your children a few things about animals courtesy of National Geographic. So read on to learn more about a great kid game…

Of course I’ve got box shots for you: 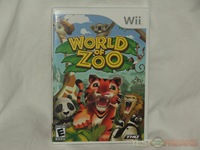 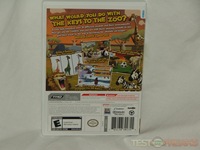 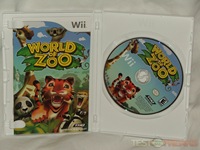 There’s actually a lot to this game really. One of the things that I found interesting and informative is the tutorials, these are a great way to learn to play the game and to help you know how to take care of the animals in your charge.

It’s called Keeper Training and it can be accessed from the main menu which also has other options like Stats, Awards, Enter Codes and you can even take a look at all of the photos you took of your animals. Here’s a few of my pictures I took of my animals playing. You can look a them in full size as well which is nice. 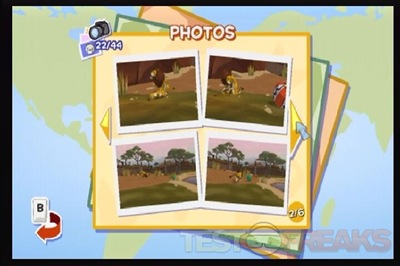 When you start the game you’ll have your own Zoo, and other players can have their own Zoos as well which is nice if you’ve got multiple people playing it. 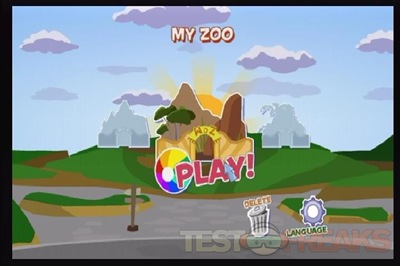 Once you enter your Zoo you’ll only have access to a limited number of animals. The other animals or habitats will have to be unlocked by earning money or tokens. Once you enter one of them you can go to the exhibit to actually interact with your animals or check out the nursery with all of it’s cute and cuddly baby animals or you can create your own animal. The animal creator allows you to modify the animals in your exhibit and you can change just about everything about them. This is one the things that children will enjoy very much, creating weird and off animals with wired colors and patterns. 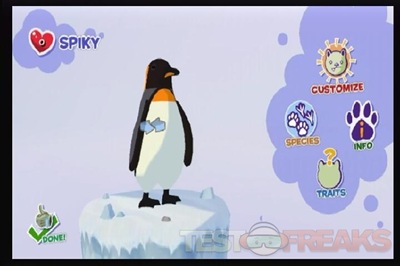 National Geographic plays a part in World of Zoo as well with little details about the animal you’re creating, so you and the kids can actually learn a little while having fun. Here’s the opening of the game with a little bit past as well:

What would you do if you had the keys to the zoo?

World of Zoo is the only game that pushes you past the fences and into a world of your own zoo.

What would you do if you had the keys to the zoo?

World of Zoo is the only game that pushes you past the fences and into a world of your own zoo.

Create and customize your zoo experience and develop hands on relationships to earn the trust and love of your animals.

Get up close and personal with the world’s most amazing zoo animals!

* Build relationships with the world’s most amazing animals through hands on interaction.
* Create and customize your own zoo.
* Create unlimited animals with the Animal Creator.
* Hours of play with mini-games, achievements and unlockables.
* Experience over 90 different animal species.
* Learn about each animal with the National Geographic animal fact cards.
* Play together with friends on the Wii!

The graphics aren’t bad, but they’re in a style that is very different. They’re cutesy and cartoony yes, but they are very distinct. I like them, they’re bright and colorful so children like them are well.

One of the aspects that is overly cute is the ability to actually pet your animals. The kids think this is just the greatest thing to do, yes it’s bordering on sickeningly cute, but it’s just great really. It allows you to really get a close up look at your animals, and virtually pet them. Here’s my penguin being petted and then the rest of the video is game play showing feeding, and playing with them:

The music in World of Zoo is very cutesy and comical, and it can get annoying really, but again the kids like it, it’s perfect for them and it does fit in with what you’re doing in the game.

Controls work very well, they’re very responsive and you only use the nunchuk to play.

The main part of the game is taking care and plying with your animals, you’ll do that in the exhibit. While you’re doing this you’ll earn ‘love’ from them and tokens, and as you play you’ll unlock more items to play with them. The habitats or exhibits differ for each animal as they would in a real zoo, adding a bit more realism to it. Overall they are very nicely done. You can even zoom in to get a closer look at your animals and parts of the exhibit. The animals will talk to you in the form of though bubbles to let you know what they need like food, grooming or a toy to play with. The animals play and have funny expressions, it’s all just really cute and a lot of fun. Here’s just a few screen captures for you:

and to finish this off here’s another video of my lions:

Conclusion:
If you’re looking for a Zoo Tycoon type of game, this isn’t it, but that’s not a bad thing… World of Zoo has a lot to offer players that differs greatly from Zoo Tycoon, it’s something that is totally different from the Tycoon style game. World of Zoo offers players a chance to actually interact with the animals and care for them. It’s a much more friendly type of game and it’s not focused on making money or trying to build things or business oriented.

There’s no doubt that World of Zoo is aimed at children, but adults might actually like it as well, as long as your a big fan of animals. Children though love it, my kids love this game truly. I have three boys 4, 7 and 8 years of age and my four year thinks it’s the coolest thing ever to play with the animals. The older boys like it as well and think it’s a rather fun game to play, they like taking care of the animals and creating them as well.

I personally found World of Zoo to actually be entertaining, yes it’s a bit childish but it’s something really that’s totally different.  I can’t see myself spending hours and hours playing it like children would, but I did enjoy playing it for this review. If you’ve got children that love animals, especially younger ones, then this is the game you want to get them. I think it’s one of the best games out there for kids really, it offers quite a bit for them to do, and it’s cute and fun and not violent in any way.

Plain and simple this game is not for adults, or even teens, it’s aimed at younger children under the age of 10 really, and for that market this game hits the target right on.