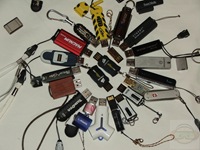 So, I’ve amassed a nice collection of USB drives and I’ve reviewed most all of them at one time or another but I’ve never compared them all to each to to find out which one is really the best overall.

Taking stock I’ve got 21 of them that are over 1gig going up to 64gb, and I’ve got others that are below one gig that just hang around in my drawer as they are sort of useless at this point in time. I’ve had more, but I’ve given them away as who really needs all of those drives, but I’ve stopped giving them away as I wanted to compare them altogether to see which is the best, and I figured that the end of the year would be the perfect time to do it.

So I’ve got 21 USB drives ranging from 1gig to 64gigs in capacity from companies like Super Talent, OCZ, Patriot, Swiss Memory, Corsair, ATP and a few others throw in for good measure. I’m only testing 1+ gig drives as I feel that below that they’re rather useless at this point in time.

I’ve been testing these drives for quite some time to create a comparison chart to see which is the best, I was doing this for an article, but also to satisfy my own curiosity as well to see just which one is the best.

So read on to see which drive is the best of the best in terms of performance in both read and write testing.

Here’s the drives all nicely organized to see: 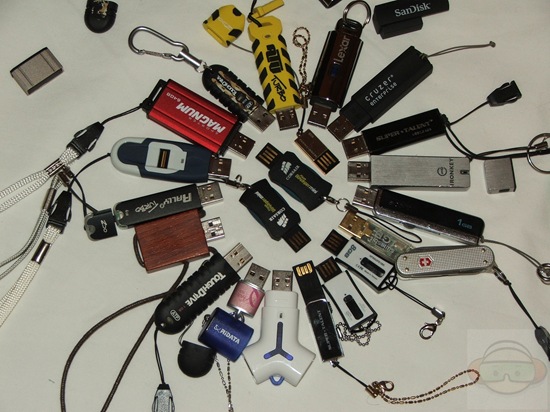 As I mentioned there are 21 of them in total from various companies, I’ll list them by size in descending order for you:

All testing was done on my main system with C2Q 6600 CPU and EVGA NF680i motherboard, it was done using a direct USB connection, no hubs involved.

System was only running basic processes at the time and nothing, I also ran the Process Idle Tasks command to make sure system wouldn’t interfere with testing, each drive was also removed and re-inserted between tests, my hard disks were degfragged prior to testing as well.

All test were performed three times and then averaged out to get all of the results shown.

All of the graphs can be clicked to show a larger view.

Here’s a copy of exactly what this test does, how it works and how to understand it:

The following characteristics are measured for each of the four representative files sizes of 512 Bytes (representing a minimal single data cluster file), 32kB, 256kB, 2MB and 64MB. The weighting of the results is not equal it represents the distribution of different files sizes as used on these devices (obtained through field research):

Delete Performance: measuring the number of files deleted per minute.

For each of the four file sizes a Combined Index is then calculated, stating the combined performance in terms of Combined Operations Per Second, with respect to a mix of write, read and delete operations.

First graph is the overall score showing Combined Index and Endurance Factor of the drives, I’ve organized them from best to worst to make it easier to read. 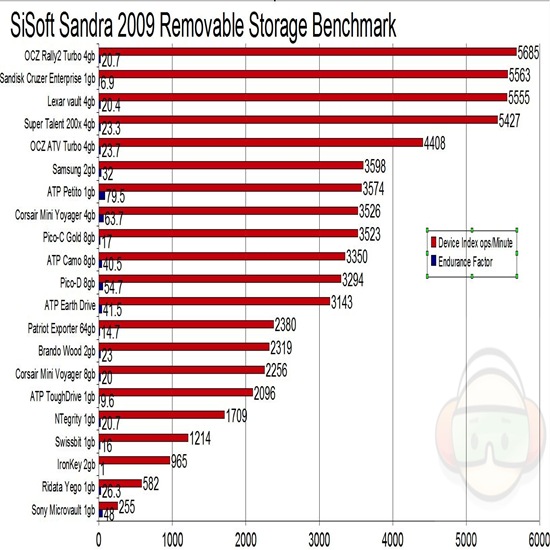 next up is looking at the 256MB Files Test inside the Removable Storage Benchmark, again best to worst.

As we can plainly see OCZ, Super Talent and Lexar and SanDisk lead the pack easily.

Read Performance: expressed both in terms of Operations per Minute (i.e. the number of files read per minute)

Write Performance: similarly expressed both in terms of Operations per Minute (i.e. the number of files written in a minute) 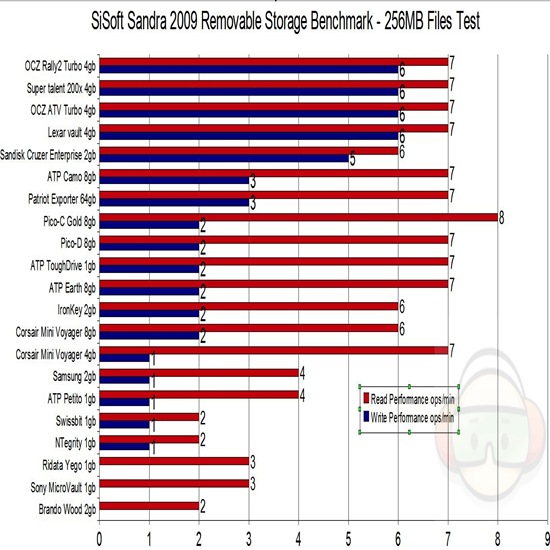 now looking closer here we see SanDisk drop from the top four spot due to slower write performance than the others.

Next up for testing I’m using DiskBench from NodeSoft, and it’s actually one of my favorite tests for USB drives as it gives us the actual time taken to perform an action, and I think actual time is a much better way of understanding it for a lot of people.

DiskBench gives us not only times, but the actual bandwidth or transfer rates in MB/s, so we’ll look at the time charts first.

For all testing the same exact file was used, it is a 350mb .AVI video file.

First up is a graph with no labeling on it, it was very cramped with the labels so I separated things to make it easier to understand, think of this graph as just an overview, I used Write speeds to organize the chart from fastest to slowest. 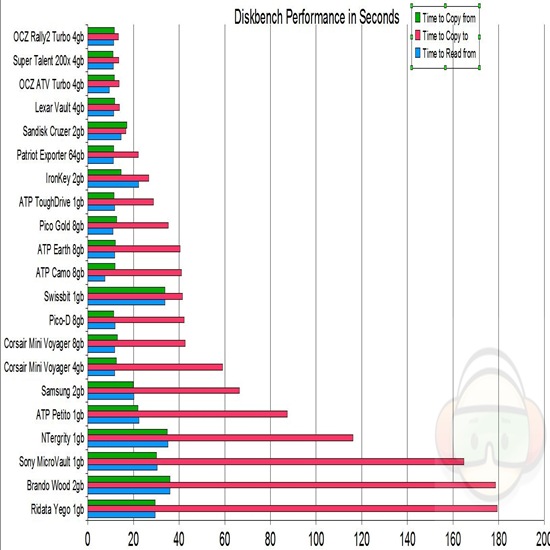 I’ve created three more graphs, I only colored the one we are looking at, but left the others in, only white with black outline for some.

First up is Time to Copy from the USB drive to my hard disk, arranged from fastest to slowest, results are shown in seconds: 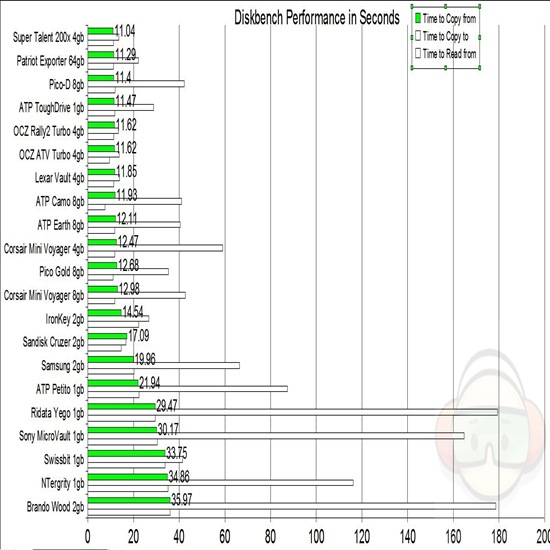 Similar results from the SiSoft testing, but here we see the 64gb Patriot Exporter fairs well. 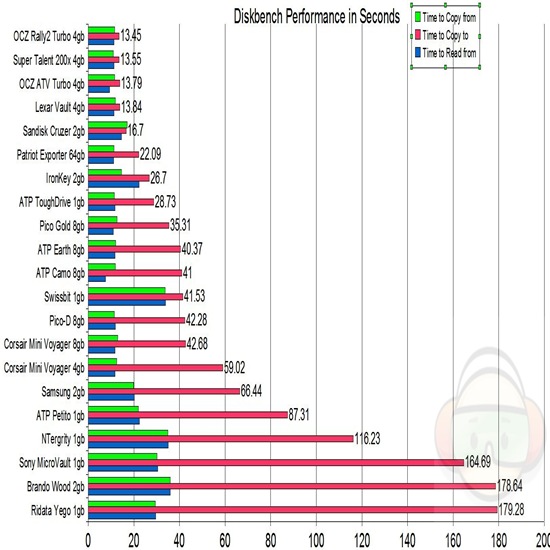 Here we are back to results that look very similar to what we saw while using SiSoft Sandra 2009 test, with the Super Talent, Lexar and OCZ drives leading. 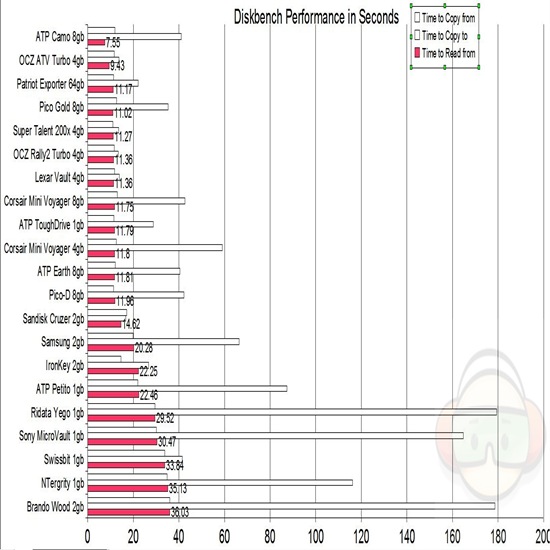 Here we see the results changed quite a bit, with ATP, OCZ, Patriot and Super Talent taking the lead, but as with Super Talent, a different drive performs better.

Now, as I mentioned DiskBench gives us times and transfer rates, so we’ll look at the transfer rates for those times now, so we have four more graphs to look at, ordered and sorted the same way.

First up is the unlabeled overall graph using Write speeds to arranged the chart from Fastest to Slowest: 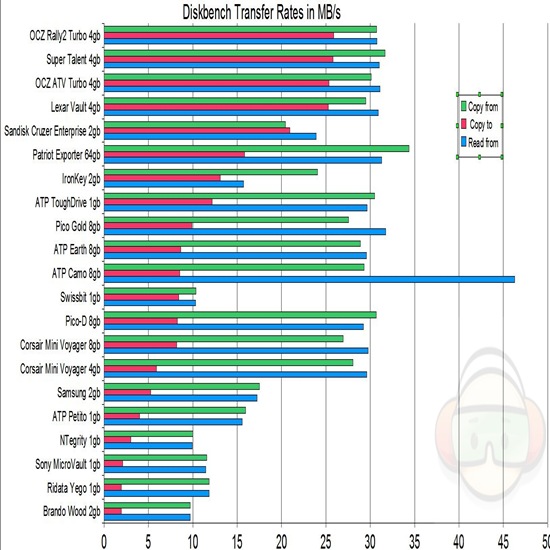 Now, we’ll look at the results individually, labeled with the speed in MB/s.

First is Copy From the USB drives, again fastest to slowest: 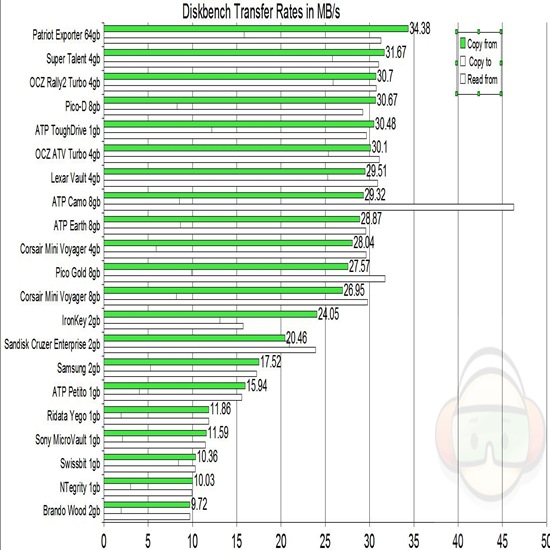 Here we see the transfer speed of the Exporter leads the pack, but if we look back at the charts we see the Exporter came in second actually below the Super Talent drive for the actual Time to Copy From from drive. I’m guessing the time lag has something to do with how the drive reads or transfers to lead to the time discrepancy.

Next we have the transfer rates to Copy To, or Write the file to the drive: 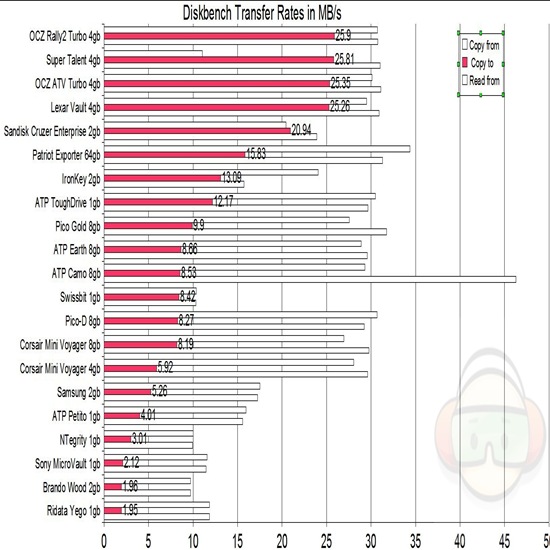 Again it’s back to the familiar ordering of the drives, with the OCZ, Super Talent and Lexar drives coming in first four with about the same transfer speeds. 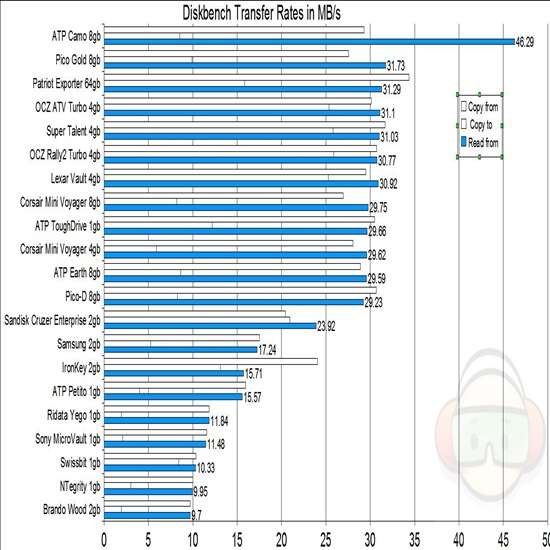 here we see why the ATP ToughDrive Camo did so well on the Read Test, it’s got excellent speeds, it’s well ahead of the others in Read performance.

I do have one final graph for you though, I was curious if there was some sort of pattern in relation to performance and size so I created another DiskBench graph (Transfer Times) with the sizes of the drives in descending order: 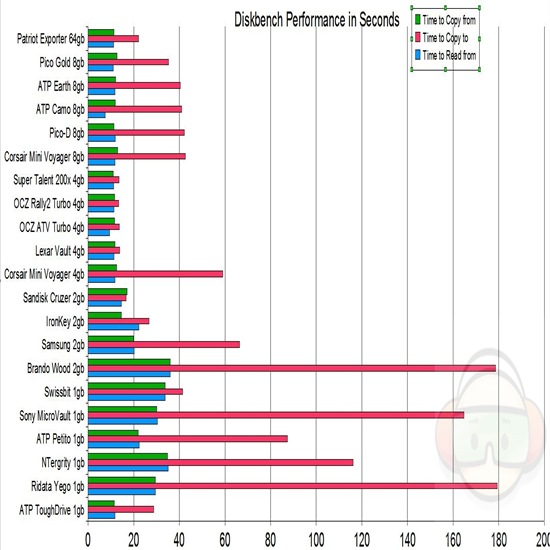 We can see from this graph that there is a sweet spot at the 4gb capacity level, with a surprise coming from the 64gb Patriot Exporter,  and the 1gb ATP ToughDrive, and the SandDisk Cruzer isn’t too bad either, but as we can see the 4gb technology is where the overall good performance lies right now.

Well I learned that it’s very time consuming to do this sort of thing, and I think I may have too many USB drives floating around right now… but I also learned there is no clear winner overall.

I did this to not only satisfy my curiosity but maybe provide a sort of database comparison for users looking to learn more about how a drive performs is a few key areas. Not everyone will use a USB drive the same way, some people might be concerned about Write speeds while someone else might be concerned about the time to Copy data from the drive.

I’s like to continue adding to this comparison as more drives comes in and hopefully build up a large database comparing the USB drives on the market.

That being said, if you’re looking for sheer capacity, obviously the Patriot Magnum Exporter 64gb USB drive fits your needs, and it also offers fairly decent performance as well, but it’s expensive and I’m not sure there’s need for that much storage right now.

The 8gig and 4gig drives are more common models that I’m sure most people have handy and use most often. Looking at those results we can see OCZ, Lexar, Sandisk and Super Talent would be the choices to go with as they offer the best overall performance. From those, one would have to make a choice about what is most important to them, Write speeds or Read speeds, and even then they’re very similar in performance overall.

Personally I use the OCZ Rally2Turbo myself for transferring stuff between computers most often if need be, it’s usually large enough for the job and I also carry the Ironkey on my keychain so it’s with me at all times, but it’s got other security features and built in software that make it much more useful than an ordinary USB drive.

Well that’s that, I hope you learned something from all of my testing, and I’ll hopefully update these charts as new drives come in. You can also check out our selection of USB Memory on the main site