Portable audio players or MP3 players are a hugely popular product, it seems everyone these days has one, and for good reason we like our music, be it for entertainment or just to get away from things like crowded buses. There are of course good and bad in all products, but it’s the time of year to let you know the best of 2008 according to how you the user and experts have ranked them. As for continuing trends this year, we got the ever popular Apple players occupying two spots, and a couple other surprises as well.

So we present you the Best of 2008 in audio players.

"Light on ounces, heavy on gigabytes, screaming with audio enhancements and streaming like a fiend: The latest ZEN puts it all in the palm of your hand." –Apple iPod Nano 4G

from 82 sources in 15 countries

With the 4th iteration to Apples iPod Nano Apple has made "the thinnest iPod yet". The Nano now features a built in accelerometer that gives it similar functions as the iPod Touch or the iPhone were you can flip it to the side and see music in cover flow mode. A added new feature for the Nano 4G is that you can "shake it" to switch song.

"Apple has thrown in a few more new goodies too. There’s Genius mode, which will create a playlist of songs that go together. You can also shake your nano to shuffle to a new song. Another new feature is voice prompts. This is a great feature for people that are visually impaired. As you scroll through the menus, a male voice reads the menu items to you. And last, but not least, this nano can record voice memos if you plug in a microphone. It works well with the iPhone earbuds/mic." –SanDisk Sansa Fuze

The SanDisk Sansa Fuze features an MP2 player with capacity of 4GB/8 GB. It also has 1.9-inch color TFT LCD. The device also supports audio formats such as Ogg, Vorbis, FLAC, Audible, WAV, WMA, MP3.it also supports video format of MPEG and photo format of JPEG. In addition to this it also has 40 Digital FM presets. It also contains a Built-in microphone and allows voice recording. It also has a USB 2.0, 3.5-millimeter headphone jack and an embedded Rechargeable battery. It comes packaged with Earphones, Quick Start Guide, and Installer CD with User Manual.

"The Sandisk Sansa Fuze is awfully reminiscent of its direct competition, the iPod Nano, with similar size, feel and click wheel. But when the almighty dollar dictates decisions, you can’t beat the Fuze." –Sony NWZ-A826 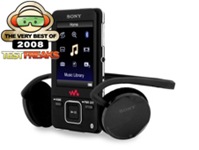 The Sony NWZ-A826 is a portable multimedia device that was released by Sony under its Walkman brand. The player measures 3.7 x 2.01 x 0.37 inches and weighs approximately 2.05 ounces. It can be used to store and play audio and video files as well as store and view image files. The player is only available in black with 4 gigabytes of flash memory that can accommodate up to 2,450 audio files or up to 15 hours of video files.

"There’s no doubt that the new Walkman is a very desirable MP3 player. It has features and functionality to rival the very best, but there are a few niggles standing in the way of a full compliment of five stars. Not everyone worships at the altar of Apple, so if you want a good alternative, give the Walkman a whirl." – Apple iPod touch with a perfect 10 out of 10 rating!

"Apple’s refinements to the iPod Touch make it one of the slickest, most impressive media players on the market today. At $229 for even the smallest 8GB version, you’re still paying a pretty premium for Apple’s name and trademark engineering, but it shines through in the user experience and overall build quality." –Digital Trends

"The iPod Touch also doubles as a portable videogame. It uses the Multi-Touch interface to give players precise, fingertip control over game elements like chess pieces and cards. Even multiplatform titles like the recent The Force Unleashed have been released for the iPod. So the device goes a long way from the mere music player of the first iPods to being a multimedia gadget and PDA all bundled in a single product. It’s good for listening to music, watching videos, browsing the web and sending e-mails, while the user enjoys its easy and charming touch interface. It’s a killer product." –Hardware Secrets

"The second-generation iPod Touch includes features that are light-years ahead of the competition, its design has improved, and its price has finally come down to earth" –Mp3.com

As you can see Apple dominates the marketplace when it comes to mp3 players, and for very good reason, they’re very good products that work well, are easy to use, feature packed and they’re just an all around great portable media player.

The Apple line of mp3 players are just an amazing example of what happens when you set out to be the best at something, Apple has created a product that is simply amazing in both form and function. They started with an initial product years ago and it has saturated the market so much so that the term iPod has become synonymous with mp3 players everywhere.