So we’re back with another ‘Best of’ list, this time it’s for the best PS3 games of 2008 as voted by Users and Experts alike. There’s not really many surprises on the list, but remember this is an overall best of 2008, and not just the best PS3 games from recent releases.

So continue on to check them out, along with descriptions, scores and excerpts from reviews of the games.

5) Coming in a number 5 we’ve got Dead Space, I’ve got this for PC and it’s a great game, especially if you like horror and sci-fi and gaming, it combines all three things I love in one great package. With it’s great graphics and storyline, it’s one I’d recommend grabbing for yourself or as a gift for the gamer in your life.

Dead Space is a third-person shooter and science fiction survival horror-action game that was developed by California’s EA Redwood Shores. It was published by Electronic Arts and it was released on October 2008 not only for the Sony Playstation 3 but for Microsoft Windows and the Xbox 360 as well.

STRATEGIC DISMEMBERMENT – Shear off limbs with powerful weapons as you carve a bloody path through the alien hordes. Find ways to neutralize attacking enemies effectively or they’ll keep coming at you. When ammo runs low, use telekinesis to pick up objects — even the enemies’ own arms and legs! — and fire them at anything that stands in your way.

"Set in the cold blackness of deep space, the atmosphere is soaked with a feeling of tension, dread and sheer terror. In Dead Space, players step into the role of engineer Isaac Clarke – an ordinary man on a seemingly routine mission to fix the communications systems aboard a deep space mining ship. It is not long before Isaac awakes to a living nightmare when he learns that the ship’s crew has been ravaged by a vicious alien infestation. He must fight through the dead silence and darkness of deep space to stay alive."

"In the end, EA proves that they can easily compete in the survival horror genre and in some aspect they have mildly reinvented the genre. I think Dead Space could turn out to become a new successful franchise, offering enough quality to even compete against Resident Evil 5. I must say, Resident Evil 4 is a bit better than Dead Space, but EA did a fine job in bringing a fair amount of gore and scary moments. I personally found Dead Space a lot scarier than Resident Evil 4, and of course that’s a great compliment. Dead Space combines the sci-fi environments of Metroid Prime with the horror of famous alien movies and some of the gameplay of Resident Evil 4 without the camp of Capcom’s survival-horror classic. Maybe it’s no classic, but I do recommend it." –

Bioshock is a first-person shooter (FPS) video game that was developed by America’s 2K Boston/2K Australia. It was first released in August 2007 for the Windows operating system and the Xbox 360. In October 2008, the Sony Playstation 3 version was released. This version was developed by 2K Marin.

The Playstation 3 version of Bioshock contains content not included in the Windows and Xbox 360 versions. This includes an additional difficulty mode called “Survivor.”

"BioShock is a first-person shooter that lets players do things never before possible in the genre. Nearly everything in the game can be turned into a weapon; players can biologically modify their bodies with plasmids, hack devices and systems, upgrade weapons and craft new ammo variants, and experiment with different battle techniques.

Players enter the game as a castaway in Rapture, an underwater utopia torn apart by civil war. Caught between powerful forces and hunted down by genetically modified "splicers" and deadly security systems, players have to come to grips with a dangerous and mysterious world filled with powerful technology and fascinating characters. With multiple avenues for surmounting challenges on both a moral and tactical level, no encounter ever plays out the same and no two gamers will play BioShock the same way."

"Should you play Bioshock? If you have any interest at all in shooters, action titles, quasi-RPGs, or some good creepy fun, then the answer is a resounding “yes”. For those who have yet to try this fantastic title, there’s almost no excuse now that it’s hit the PS3." –

Grand Theft Auto IV, also known as GTA 4, is a sandbox-style video game developed by Scotland’s Rockstar North Ltd. This action-adventure video game was published by Rockstar Games and it was released for both the Playstation 3 and the Xbox 360 on April 29, 2008.

The game is set in a fictional city called Liberty City whose landscape and style is based heavily on New York City.

Players of Grand Theft Auto IV takes on the role of an Eastern European war veteran named Niko Bellic. Bellic moved to Liberty City in hope of achieving the American Dream. However, he quickly becomes involved in Liberty City’s world of crime, corruption, and gangs. There, players must pursue a number of missions in order to progress in the game.

"What does the American Dream mean today?

For Niko Bellic, fresh off the boat from Europe,  it is the hope he can escape his past.

For his cousin, Roman, it is the vision that together they can find fortune in Liberty City, gateway to the land of opportunity.

As they slip into debt and are dragged into a criminal underworld by a series of shysters, thieves and sociopaths, they discover that the reality is very different from the dream in a city that worships money and status, and is heaven for those who have them and a living nightmare for those who don’t.

"One of the greatest video game stories ever told. It may have its flaws, but it is the most ambitious game made to date and, without a doubt, the best game so far this generation." –

Start with your own SackBoy and customize him however you wish. Then run, jump, grab, climb and explore thru over 50 awesome developer levels packed with dangers to navigate, race to win and puzzles to solve. As you play you will learn the skills to build a world of your own by earning creative tools and collecting hundreds of items. Use these items and tools to shape amazing levels of your own, featuring puzzles, challenges, and enemies of your own design. When you are ready, go online to access the LBP community and share your creations for everyone to play

"LittleBigPlanet is without a shadow of a doubt my favourite game to come out this year.  This is a truly unique game and isn’t just a rehash like 90% of the titles out there.  The inclusion of the level creator and community maps lets you think towards to future and what it’ll be like when more games include functionality like this. If you only buy one game this holiday season, make it LittleBigPlanet because you won’t be disappointed." – 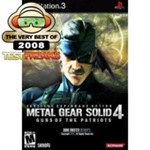 Metal Gear Solid 4: Guns of the Patriots is the final chapter in the saga of Solid Snake which sends him around the world in pursuit of his arch nemesis, Liquid Ocelot. Armed with new gadgets and abilities, Solid Snake must shift the tides of war into his favor, using the chaos of the battlefield to infiltrate deep into enemy territory. In his globetrotting final mission, Snake must sneak deep into enemy locations in the Middle East, South America, and other corners of the earth to foil Liquid Ocelot’s plans for total world domination.

* MGS4 pushes the power of the PLAYSTATION 3 to its limits with cutting edge graphics and surround sound. It also aims to be the hallmark title for the new DUALSHOCK3 controller.
* Command Snake in his final mission which spans the entire globe as he attempts to foil Liquid Ocelot and his massive army of PMCs.
* Influence the tides of war through both passive and active means. Snake can directly aid local militia who engage invading PMCs soldiers, or encourage more fighting to slip past undetected amidst the commotion.
* Unlock custom weapons and modifications as you trade weapons with your black market weapons dealer, Drebin.
* Providing Snake with his most advanced stealth suit to date, OctoCamo, allows Snake to blend in with his environment as it digitally manifests nearby textures in real time.
* Otacon is back to support Snake by providing new high tech gadgets, including Metal Gear Mk. II, the ultimate reconnaissance tool, and Solid Eye, which gives Snake real-time information on enemies and his surroundings.

* Up to 16 players can battle it out individually or as a team
* Sons of the Patriot(SOP) system allows team mates to visually synchronize and monitor each other’s status at all times
* Players can select up to 4 skills to specialize in to match their play style and increase their effectiveness. Close Quarter Combat(CQC), Knife fighting, quickness, alertness, heavy weaponry mastery, demolition, and sniper mastery are just some of the skills you can specialize in
* Frequent future downloads will include new maps, new game type modes, skins and weapons

"I try to be in tune with the gaming community, and I’ve made my thoughts clear as to how I feel about the game and read what others think as well, and I came across a comment that really stood out in my mind, with that being that Metal Gear Solid 4 is more of a spectacle than anything else. I can’t say I disagree with this remark in any sense. It’s the series’ own fault as to why it feels this way as well. Metal Gear Solid 3 had left me on such a high emotional note that any kind of expectations that I and other fans may have had seemed impossible to achieve, but Kojima and crew did their best and its an amazing game because of it, but for reasons almost inexplicable I can’t help but think that Metal Gear Solid 4 is in actuality my least favorite in the series. " –Gamersmark

"Metal Gear Solid 4… I don’t even know where to start. This game has to be the best game of the year. It has it all: good story, awesome graphics, and even great controls.One thing that made me laugh, was after every mission, the game needs to install some files, but they keep you entertained by giving you warnings and tips. Some warnings come up at different times, such as “It’s past 1am, maybe it’s time to take a break”.
This is one of the games, where I wish I was able to give it more than a 5." –PS3Infection