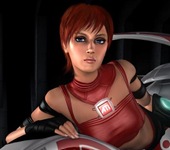 So last week ATI was kind enough to send me over their new Catalyst Drivers, version 8.12, for testing, not only does it include several improvements but also the new AVIVO Video Converter Program that utilizes the ATI Graphics Chip for faster encoding of videos. This version isn’t due out until the 10th, but I’ve been hard at it testing the performance in several games for comparison between version 8.11 and version 8.12.

So read on to learn what I learned, I tested with many games including FarCry2, Crysis, Crysis Warhead, Call of Duty World at War, Fallout3 and Spiderman Web of Shadows as well…

Here’s a quick overview of the new release:

Highlights of the ATI Catalyst™ 8.12 Windows driver release include:

*With the release of ATI Catalyst 8.12 users can unlock the potential of accelerated applications enabling ATI Stream technology for millions of ATI Radeon™ graphics processors worldwide

*ATI Stream enables the hundreds of parallel cores inside AMD graphics processors to accelerate general purpose applications.  These capabilities will allow ATI Stream-enabled programs, for a variety of different tasks and from a growing number of software vendors, to operate with optimized performance or with new functionality.

*The CAL (Compute Abstraction Layer) is now include in the Catalyst driver package. CAL is the enabling component for ATI Stream

* This release of Catalyst™ introduces a new advanced video quality control:  Noise Reduction for progressive video content, which removes ghosting artifacts while preserving details of the original video.  The slider control can be found in the All Settings page of the Avivo Video tab found in the Catalyst Control Center.

Now onto my part of all of this….

First up the basics of  my system:

of course I’ve got hard drives in there and DVDRW drives as well, but you don’t need the particulars of those.

Windows Vista is fully patched and all games have the most recent patches on them.

Ok, for most games I used FRAPS to record the framerates and then averaged them out, I played the same section three times over to try and get some semblance of equality in testing.

For some games I used the built in benchmarks, like FarCry2, Crysis and Crysis Warhead.

Benchmark the graphics performance of the video adapters.

The test involves the generation of Mandelbrot Set fractals that are used to realistically describe and generate natural objects such as mountains or clouds. Such instructions are used for audio and video encoding and decoding, games and other applications where the same operation needs to be applied to large amount of data We can see here that actually version 8.12 scored a bit lower than the 8.11 drivers…

Next, I figured why not run 3dMark06: Very, slight increase, nothing to get excited about at all… We see a very small increase when moving to the new driver version on the average.

Now I recently got Spiderman Web of Shadows for review, and I figured I could bench it while trying it out.

There’s really no settings for Spiderman at all though. Next up is Crysis: We see a slight increase but not much really here.

Now we have Crysis Warhead: Not much of a real difference at all here either.

Next up we’ve got Call of Duty World at War, I used FRAPS of course and I played from the Beach to the Beach Landing 3 times each.. fun-fun Here we see the averages do go up using the new 8.12 drivers, not sure what’s up with the minimum dropping like that though, I tried to do the exact same thing each time, but I may have done something a bit differently. Still though what we want to look at is the Averages, and they do go up quite a bit using the new Catalyst drivers. We see a big difference here between the versions of the drivers, pushing the average way up

Of course the most important thing here is this new version of the Catalyst Drivers is the Video Converter, and honestly it’s hit and miss with it, sure it’s fast, very fast to convert movies. Only problem is though I ran into problems with it, sometimes my video would be converted with no sound, sometimes there would be sound but no picture and other times it would be all scrambled, the video I mean would be.

What I wanted to do was give you some nice graphs with times and all that, but I can’t because it truly didn’t work correctly every time for me, so that would be wrong to give you results based on those.

Originally I used three different video converting programs and was going to compare their times to AVIVO times, sure it’s fast, like going from  20+ minutes to convert a 615mb WMV file to MPEG using Daniusoft Convertor to doing the same thing in under 5 minutes using Avivo Video Converter. That worked perfectly though, so great.

Next I tried converting a 350mb .AVI file to .WMV, using Arcosft Media Convertor and it took a little over 7 minutes, while using Avivo it took under one minute but I had audio and no video.

Yes, ok it’s new, so there’s bound to be bugs and I’m sure we’ll be seeing a hotfix for it soon for any of the problems, but still it would be nice if it worked somewhat.

Anyway, here’s some screenshots for you of how the whole process looks and works, you’ve got to be in Basic Mode of Catalyst Control Center though to access the Avivo Program. Overall the drivers themselves do give you a bit of a performance gain, and the Avivo is a very cool feature, but I would like to see it have options for changing sizes, bitrates etc for the end result videos. Yes there are choices for Sony PSP and iPod Video so they should be the correct size, but I would still like to have full control over the final output.

This driver will be posted live on AMD.COM December 10th, 2008