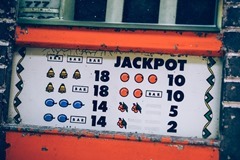 Penny slots are a popular niche among online slot machines that accommodate the lower stakes range. Among the numerous releases found online, some of them have been outstanding in capturing the attention of gamers, and a few penny slot machines noteworthy to mention are:

The Starburst Slot is among the most widely marketed by NetEnt with a spot in nearly every gambling destination that supports the gaming software. Starburst is especially the center of focus in most casino bonuses, especially in the case of NetEnt free spins, which has driven its popularity to staggering heights.

Starburst blasts players into outer space where they can collect payouts while beholding the grand nature of the cosmos. The five reels of the game are made see-through to put the sight on full display, which is accentuated by the gems that are used as characters. When placing stakes, punters can use a coin value of as little as one penny, and at least ten of them have to be used on each of the set’s ten play lines. The winnings provided lie between 5 and 250 credits.

Playboy is famous in the United States as one of the magazines that focus on providing adult lifestyle and entertainment news for men. Microgaming taps into this piece of entertainment to develop a game of a similar name that also focuses on the alluring beauty of Playboy bunnies to keep gamers spinning the reels. Not much is demanded per spin with a minimum bet limit of thirty pennies, and it can go as high as fifteen credits.

The Playboy Slot earns players’ hearts with a lot more than a proper presentation and 243 ways to win with the free spins round. The free spins bonuses featured in the game carry a unique Microgaming touch that provides different values depending on the playboy bunny that presents them. Jillian tables the highest bonus value of twenty-five free spins that are accompanied by a Wild Night feature, which involves turning up to all five reels wild.

The list of popular penny slots dives back into the entertainment business to include the Michael Jackson: King of Pop slot machine. The name Michael Jackson barely needs any introduction even to those with little understanding of the music industry, which is why Bally Technologies used the entertainer as a theme for one of the highest demanded titles.

Michael Jackson: King of Pop Slot showcases the legend in all his glory on five reels that are finely built using three-dimensional imagery. Gamblers can get a performance from Michael of famous hits like Smooth Criminal, Billie Jean, and Dirty Diana for as little as forty pennies per round. The game is adorned with an array of bonuses and promotions that accompany the usual credit wins collected by landing icon combinations on the twenty-five pay lines. These bonuses include Moonwalk Wilds, stacked wilds, wheels of bonuses, and free spins.

Mega Fortune introduces players into a world of flashy jewelry, posh cars, and first-class destinations that match the massive winnings it presents. This slot game, which is a product of NetEnt, is especially popular for its provision of massive progressive jackpot winnings that are counted in three pools. The set is responsible for the second-highest win in slot games history, which was collected by a Finnish man and amounted to more than 17 860 000 euros. This amount is a couple of thousands short of the biggest win, which was offered by Microgaming’s Mega Moolah. Even with such massive payouts, the game does allow the use of coins valued as low as a penny.

Like Starburst, Gonzo’s Quest is well known on the online platform thanks to proper marketing by its developer NetEnt. This set features Gonzo, a mining expert in search of treasures to change his life and share some of the spoils with gamblers. Coin values of one and fifty pennies can be used. Each spin can hold between twenty and two hundred of the coins.

The reasons for penny slots’ popularity differs from one title to another. Nearly all of these games come with free to play options that punters can use to sift through and find the best one.