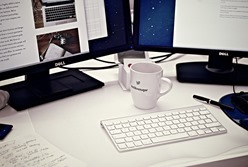 Offices used to be viewed as bland spaces which were simply used for housing workers. Now, however, offices are becoming more colorful and versatile, largely thanks to the introduction of exciting new technologies.

There are now companies which exist to revolutionize the workplace by servicing offices and ensuring that they are fully equipped to effectively service the needs of the business. Here is some of the technology which can go into an office.

Perhaps one of the most talked about potential additions to offices is VR, or virtual reality. VR presents numerous opportunities which offices may be able to utilize in order to make the workspace more efficient, and improve business operations.

It may for instance, allow for ‘video walls’ to be introduced, which would make communicating with other people in different locations a much easier and more engaging activity. Facebook has announced that it hopes to offer people a fully immersive VR experience, potentially allowing them to interact with 3D simulations of other people.

Gyms maybe slightly lower tech than VR, but still a very effective addition to an office. They have the ability to energize the workforce and add some pizazz and variety to the workspace. There is no doubt that the technology in gyms has improved over the years, and now many workers can improve their physical and mental wellbeing through working out.

On top of this, hi tech gyms are becoming more common, and may well be added to offices in the near future.

Many people have heard of the ‘internet of things’, which is essentially the addition of smart, digital technology to regular everyday items/features, such as fridges and walls. This technology is likely to become common in the office environment, as it has the potential to integrate a variety of different devices and information sources together.

Introducing this type of technology to an office will no doubt create an effective network of smart devices which will make it much easier for staff to make the most of the equipment in their office.

Similar to virtual reality, AI (artificial intelligence) is one of the most talked about terms of the decade, and with good reason. It has the potential to revolutionize both the work processes in an office as well as the office itself.

It is now possible to envisage an office where AI can pick up on errors in work processes and fix them, as well as book rooms for meetings and place workers in optimal areas. In fact, there are too many AI technologies to list, but it could well be one of the most significant additions to offices of the future.

Ultimately, there is now technology being created on a regular basis which is capable of completely recreating the offices of today. It is likely that offices in the future will look entirely different once they are filled with a myriad of advanced technology.