I would love to get a 1tb SSD, it would be so nice to have the speed and space. Right now I’m using a Kingston HyperX 256gb SSD and yes it’s fast but I don’t like the fact that I have to watch everything I install. I have it paired with a Seagate SATA3 2tb drive which works I guess with the OS and a few other things on the SSD and then mostly everything else on the Seagate. If I had a 1TB SSD I could have more stuff on an SSD obviously and the would lead to a faster system which would be nice but I guess it isn’t necessary. Anyway, the point of this post is that Angelbird has just launched a 1TB version of their wrk Series SSDs with a price of $599 which is low for an SSD really…

Angelbird, Austria’s premium SSD manufacturer, is now offering the SSD wrk and SSD wrk for Mac with 1 terabyte of storage. The new drives combine the highest storage capacity with great performance, robustness and efficiency in an ultra-slim aluminum chassis – making it the perfect choice to upgrade a Mac®, MacBook®, MacBook pro, PC or Notebook.
Angelbird has made no compromises in quality for its new SSD wrk models, which boast an ultra-fast SATA 3.1 6Gb/s interface that is also fully downward compatible with legacy computers and operating systems. The SSD wrk uses the SMI 2246EN controller and the case is made of high-quality matt-black anodized aluminum and houses custom-packed multi-level-cell NANDs. The maximum read and write speeds are 564 and 456 megabytes per second. The new 1-terabyte versions reach 72.000 IOPS (Input/Output Operations per Second). With a height of only 7 millimeters the SSD wrk 1 terabyte fits even into the slimmest notebook or desktop case. 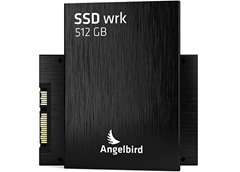 The SSD wrk for Mac is ideal for upgrading older Apple models to the ultra-fast SSD technology. Specifically the device is equipped with native TRIM support, a feature that works straight out of the box – enabled by default in OS X, including Yosemite. There is no need to install any additional software, drivers or a TRIM enabler. As with all models of the SSD wrk series, the 1 terabyte versions are equipped with additional over-voltage and ESD protection features as well as overload protection and EMS protection. Customer security is provided by a five-year warranty.

“We are happy to announce the extension of the successful SSD wrk-series with the two new 1 terabyte versions. This series now covers the entire consumer SSD spectrum, offering perfectly adapted models for every requirement,” said Roman Rabitsch, CEO of Angelbird.