Apple just announced several new things going on with them, and I figured instead of making separate posts I’d combine it into one for you. At least what I’ve got so far, and I have to say I do like the looks of the new iPod nano. The nano and the shuffle have had drastic makeovers, but the touch hasn’t changed that much at all in appearance.  The touch has changed internally and with the addition of the a front camera.. 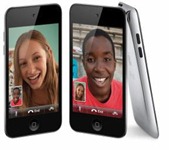 Apple’s stunning Retina display makes everything on iPod touch look even more incredible, whether playing games, watching video, browsing the web or flicking through photos. The Retina display has 960 x 640 pixels—four times as many pixels than before. The resulting 326 pixels per inch is so dense that the human eye is unable to distinguish individual pixels when iPod touch is held at a normal distance, making text, images and video look sharper, smoother and more realistic.

The rear-facing camera on iPod touch is perfect for HD video recording. Users can easily capture HD video wherever they are and share it via email, MobileMe™ and YouTube. With the iMovie® app, users can combine movie clips, add dynamic transitions and themes and include photos and music right on their iPod touch. Users can buy and download the app for just $4.99 through the App Store? right on their iPod touch.

Apple’s A4 chip provides iPod touch users with exceptional processor and graphics performance along with long battery life. This remarkably fast and power-efficient chip, along with the Retina display and 3-axis gyro, makes games on iPod touch the best they’ve ever been on any mobile device.

iPod touch is the world’s most popular portable game player. Now with Game Center, iPod touch users can challenge and play friends or be matched automatically with new opponents. Game Center lets iPod touch users showcase their scores and achievements and discover new games their friends are playing. With the App Store on iPod touch, users have access to the world’s largest catalog of apps with over 250,000 apps, including over 65,000 game and entertainment titles to choose from.

Music and entertainment lovers can now easily access iTunes® Ping directly from their new iPod touch. iTunes Ping lets you follow your favorite artists and friends to discover the music they’re talking about, listening to and downloading. iPod touch users also have the entire iTunes Store® at their fingertips, giving them instant access to the world’s largest catalog of music, TV shows and movies.

iPod is the world’s most popular family of digital music players with over a quarter billion sold. Apple’s new holiday lineup includes a brand new iPod shuffle® for just $49; the amazing new iPod nano® with Multi-Touch™ starting at just $149; the incredible new iPod touch with Retina display, Apple’s A4 chip, FaceTime, HD video recording and Game Center starting at just $229; and the iPod classic® in a 160GB model for $249.

The new iPod nano with Apple’s Multi-Touch interface allows users to access their songs, artists, albums and playlists with a tap or swipe of their finger on the display. Holding down a finger returns the user to the Home screen, and users can easily use two fingers to rotate the screen if it is clipped onto their clothing upside down. Users can also customize their Home screen by simply dragging icons from other screens onto the Home screen.

iPod nano also features Shake® to Shuffle™, giving music lovers the ability to shake their iPod nano to shuffle to a new song in their music library. With its built-in FM radio, iPod nano lets you listen to your favorite radio stations, and live pause lets you pause and resume playing your favorite FM radio shows without missing a beat.

With an amazing new design that is nearly half the size and weight of its predecessor, the new ultra-portable iPod nano is a natural workout companion. Clip iPod nano onto your workout clothing, touch your music and start your workout. iPod nano features a built-in pedometer that makes it easy to track your steps and also supports Nike + iPod®, giving users the ability to track runs and workouts.

iPod is the world’s most popular family of digital music players with over a quarter billion sold. Apple’s new holiday lineup includes a brand new iPod shuffle® for just $49; the remarkable new iPod nano with Multi-Touch starting at $149; the incredible new iPod touch® with Retina™ display, Apple’s A4 chip, FaceTime®, HD video recording and Game Center starting at just $229; and iPod classic® in a 160GB model for $249.

The new iPod nano will be available next week for a suggested price of $149 (US) for the 8GB model and $179 (US) for the 16GB model. Both models are available in silver, graphite, blue, green, orange and pink through the Apple Store, Apple’s retail stores and Apple Authorized Resellers. The 8GB and 16GB iPod nano (PRODUCT) RED is available through the Apple Store  and Apple’s retail stores. iPod nano requires a Mac® with a USB 2.0 port, Mac OS® X v10.5.8 or later and iTunes® 10 or later; or a Windows PC with a USB 2.0 port and Windows Vista or Windows XP Home or Professional (Service Pack 3) or later and iTunes 10 or later.

iPod shuffle is based on Apple’s incredibly popular shuffle feature, which randomly selects songs from a user’s music library. The clickable buttons make the new iPod shuffle even easier to use. Press the center button to play and pause, press the outer buttons to skip forward and back or adjust the volume up and down.

The new VoiceOver button on top of iPod shuffle allows users to hear the name of the currently playing song and to switch between songs, playlists or Genius Mixes. VoiceOver speaks 25 different languages and even alerts users when their battery needs charging.

The new iPod shuffle now supports Genius Mixes, the popular iTunes® feature that automatically creates mixes from songs in a user’s music library that go great together. Genius Mixes provide the perfect way to rediscover music users already have, but may not have listened to recently.

iPod® is the world’s most popular family of digital music players with over a quarter billion sold. Apple’s new holiday lineup includes a brand new iPod shuffle for just $49; the remarkable new iPod nano® with Multi-Touch™ starting at $149; the incredible new iPod touch with Retina™ display, Apple’s A4 chip, FaceTime®, HD video recording and Game Center starting at just $229; and iPod classic® in a 160GB model for $249.

The fourth generation iPod shuffle will be available next week for a suggested price of $49 (US) for a 2GB model in silver, blue, green, orange and pink through the Apple Store® (www.apple.com), Apple’s retail stores and Apple Authorized Resellers. iPod shuffle comes with Apple Earphones and the iPod shuffle USB cable. iPod shuffle requires a Mac® with a USB 2.0 port, Mac OS® X v10.5.8 or later and iTunes 10 or later; or a Windows PC with a USB 2.0 port and Windows 7, Windows Vista, Windows XP Home or Professional (Service Pack 3) or later. 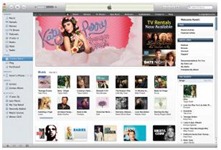 Ping lets you follow your favorite artists to see what they’re up to, check out photos and videos they’ve posted, see their tour dates and read comments about other artists and albums they’re listening to. You can also create a profile on iTunes to let your friends know who you’re following, what you’re listening to and which concerts you’re going to. There’s no better way to discover new music than to find out what your friends are listening to, and Ping’s Recent Activity feed shows you their posts about artists, albums, songs and concerts, plus a consolidated Top 10 list of the songs and albums your friends and the artists you follow are downloading from iTunes. In addition to using Ping on your desktop computer, you can take it with you on your iPhone® or iPod touch®,** so you’re always plugged into your personal music scene.

With iTunes 10, you can rent your favorite HD TV shows commercial free from ABC, ABC Family, Fox, Disney Channel and BBC America and watch them at home or on the go for just 99 cents an episode. Thousands of episodes are available, many the day after broadcast, to watch on your Mac® or PC, iPhone, iPod touch and the all-new Apple TV®, and you have 30 days from the moment you rent an episode to start watching it, and 48 hours after that to finish it.

iTunes 10 also features AirPlay wireless music playback to listen to your music on remote speakers using Apple’s AirPort Express® base station. In addition, AirPlay now works without AirPort Express, using speakers, receivers and stereo systems from companies including Bowers & Wilkins, JBL, Denon and iHome, so you can enjoy your entire iTunes music library wirelessly from any room in the house with no extra gear required.