The NAS box is the original cloud I think, sure we have the ‘cloud’ now that the term is popular and everyone is into it, but we’ve had the cloud for a long time in the form of the NAS box. I don’t get why it’s a surprise to anyone or it’s so popular all of the sudden?! So, anyway, ASUSTOR has just announced the AS 2 Series of NAS boxes aimed at personal use or the home user and they’re budget priced so they’re more attractive to the average user. The new AS 2 series is just as powerful as the other NAS boxes in the ASUSTOR catalog and they offer the same excellent features. Full details below for you.. 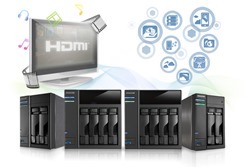 ASUSTOR Inc., a leading innovator and provider of network storage solutions, has announced the launch of its brand new AS 2 series network attached storage (NAS) targeted at personal and home users. The series is further divided into 2 sub-series: the AS-20XT series (AS-202T/AS-204T) designed to give users the essentials for creating a personal cloud and the AS-20XTE series (AS-202TE/AS-204TE) designed to give users both personal cloud and digital entertainment functionality. Offering both high quality and functionality at an economical price, the 2 series not only was designed to meet the needs of consumers but is also a great entry level product for users who are using a NAS for the first time.

All of ASUSTOR’s 2 series devices are powered by the latest Intel® AtomTM 1.2GHz dual core processors. The AS-20XT series comes equipped with 512MB of DDR3 memory and boasts read and write speeds of 104+ MB/s and 74+ MB/s respectively. Furthermore, the AS-20XT series offers a variety of powerful cloud storage functions that allow users to easily set up their own backup server, file server, video surveillance solution, Web server and more. Conversely, ASUSTOR’s AS-20XTE series devices come equipped with 1GB of DDR3 memory. The AS-20XTE series devices feature an HDMI port and infrared receiver which can be paired with the XBMC App to turn the NAS into a multimedia player. After downloading and installing the XBMC App from ASUSTOR’s App Central users need only connect their NAS to any HDMI ready display to immediately begin playing all the multimedia content from their NAS. Additionally, users can also opt to purchase ASUSTOR’s exclusive remote control or install the official XBMC Remote App for free on their mobile device to control all multimedia playback on their NAS.

The 2 series devices all come with the ADM 2.0 (ASUSTOR Data Master) operating system, that features an intuitive graphical interface which provides users with a familiar experience closely resembling the simplicity enjoyed on mobile and tablet devices. ADM 2.0 contains an array of innovative features such as a comprehensive set of backup solutions to protect your data, Mission Mode backup to ensure the completion of backup jobs, and FTP Explorer, the first FTP client designed exclusively for use on a NAS giving users the ability to enjoy drag and drop file transfers from the convenience of the ADM desktop. ADM 2.0 also features the App Central App repository which contains over 100 free and unique NAS Apps that users can download to add functionality to their NAS devices. Moreover, users can also utilize ASUSTOR’s exclusive AiMaster and AiData mobile apps to manage their system and data from the convenience of their mobile devices. Users will also be able to stream music and videos, view photos, preview documents, and ultimately enjoy the convenience of cloud access while on the go.

Key Specifications for the AS-20XT Series:

Key Specifications for the AS-20XTE Series:

A live demo of ASUSTOR’s ADM 2.0 operating system is available for access at: http://www.asustor.com/live_demo