So there’s a new phone coming to Boost Mobile and it’s not just any phone as it’s the Kyocera Hydro which is a waterproof phone and we all know how handy that could be. The Hydro is running Android 4.0, it’s got a 1ghz CPU along with a 3.5” screen and a 3.2mp camera and course wi-fi and GPS as well. Price will be $129.99 and it will be available on August 3rd. More info below for you.. 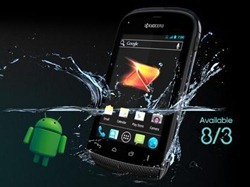 –Boost Mobile, a leader in the no-contract wireless industry, makes a splash this summer by unveiling the Kyocera Hydro, the firstIPX5- and IPX7-level water-proof Android™-powered smartphone that doesn’t require a contract. Kyocera Hydro is “oops proof,” with innovative technology built to withstand sprayed water like rain (IPX5) or even being submerged in three (3) feet of fresh water for up to 30 minutes* (IPX7).

“Wireless devices and water generally are not a good combination, but with Hydro you finally get the peace of mind to know that they can peacefully coexist.”

Boost Mobile and Kyocera recognize that mobile phone accidents happen, but unlike cracked screens or broken keypads that can be replaced, water damage is usually irreversible. In almost all cases, water damage results in nothing more than a good-looking paperweight. According to industry statistics, more than 82.5 million mobile phones nationwide have been destroyed by water or moisture. Water damage also drives more than 20 percent of handset insurance claims during the summer months as consumers look to stay cool and connected by the pool.

“With other water-soaked smartphones, consumers instantly move into MacGyver mode attempting to beat the odds with dry rice, Ziploc bags and other home remedies that rarely work,” said Andre Smith, vice president-Boost Mobile. “With the Kyocera Hydro, consumers can eliminate the panic of water damage and just enjoy their affordable Android-powered smartphone paired with Boost’s award-winning no-contract service with payments that shrink over time.”

Kyocera Hydro is paired with Boost Mobile’s no-contract $55 Android Monthly Unlimited plan with Shrinking Payments. For every six on-time payments, the cost of Boost Mobile’s Monthly Unlimited plan shrinks by $5, eventually getting down to as low as $40 a month for unlimited nationwide talk, text and picture messaging, Web, email and calls to 411. Payments do not need to be consecutive to qualify for the next savings milestone.

“Kyocera Hydro offers a great value for a sleek, fully featured smartphone – and being waterproof is really the icing on the cake,” said Eric Anderson, senior vice president and general manager of global sales and marketing at Kyocera Communications, Inc. “Wireless devices and water generally are not a good combination, but with Hydro you finally get the peace of mind to know that they can peacefully coexist.”

Features of the Kyocera Hydro include:

Access to more than 600,000 Android Apps as well as music and movies on Google Play™